What Kind of Woman Attracts a Taurus Man? 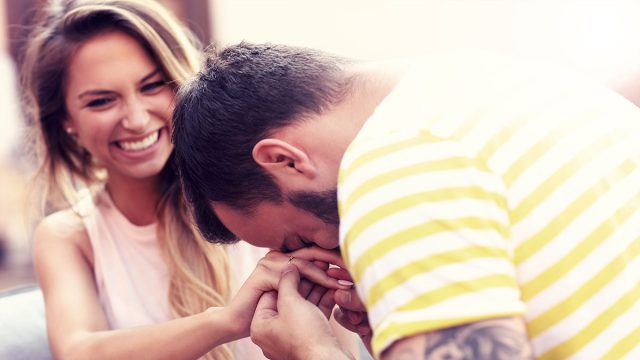 If you have a crush on a Taurus guy and want to get his attention, then you need to know what type of woman attracts a Taurus man.

What are the qualities he looks for in a romantic partner?

Every zodiac sign has different characteristics they look for in their ideal mate based on their own personality traits.

If you want to know whether or not you would be a good match for a Taurus guy, you need to look no further than his zodiac sign.

Once you know more about his sign’s typical personality traits and behaviors in love, you will know exactly what kind of woman attracts a Taurus man.

Each zodiac sign is ruled by a specific heavenly body that tells us something important about that sign’s character. The guiding planet of Taurus is Venus, the planet of love and beauty.

This tells us that, perhaps more than any other zodiac sign, a Taurus man’s weakness is a beautiful woman.

Some guys like it when a woman has an edgy, androgynous style, but short haircuts and spiky clothing will only repel a Taurus man.

Taurus men in relationships like to take the conventional male role. Being with an ultra-feminine woman makes them feel more manly.

He likes a girly girl who wears dresses and makeup but isn’t too high-maintenance. He loves a flowy, romantic style on a woman like a bohemian skirt and long, loose hair.

He also likes when a woman shows off her feminine curves in a tight dress or a low cut top, but she should still be conservative and save something for his eyes alone.

Along with being feminine, a Taurus man likes a woman who is submissive because that also allows him to take the conventionally masculine position in the relationship.

One of a Taurus man’s negative traits is that he can be very controlling. He is set in his ways and feels uncomfortable when his routines are interrupted or his opinions are challenged.

A Taurus man is patient and accommodating and he likes a woman who is assertive and knows what she wants.

Most of the time, he is happy to let his partner take charge. But in public, or when something is really important to him, he wants to be the one in control.

He needs a submissive woman who will go along with his desires. She doesn’t have to defer to him all the time, but she should be willing to do it when it means something to him.

For example, if a Taurus guy really wants pizza for dinner but his partner is craving tacos, he will let her pick the restaurant.

But if he is taking her to an event for his work and he doesn’t like the dress she picks out, she should change clothes without complaining.

Thanks to his guiding planet Venus, the planet of beauty, a Taurus man can be a bit superficial sometimes.

He worries about appearances and what other people think of him. He wants a partner that he can trust not to embarrass him in any situation.

Although he likes to spend plenty of time alone at home with his lover, his friendliness also makes him quite popular so he has lots of social events to attend.

He needs a woman who will fit in at a swanky gala just as much as a casual party at a friend’s house. She should be able to blend in with any sort of crowd and make friends easily.

A Taurus man’s ideal woman should be elegant and sophisticated. She should always carry herself with poise and be an excellent guest and a gracious host.

Venus, as the planet of love, also makes a Taurus man highly romantic. He has a tough exterior, though, so not many people get to see his soft, passionate side.

He will reveal his romantic tendencies to the right woman once he feels safe with her. A Taurus partner offers no end of romantic gestures like roses, chocolates, and love letters.

His ideal mate should not only appreciate and adore his romantic nature but should also reciprocate by doing sweet things for him.

Slipping a cute note in his pants pocket, surprising him at work with his favorite meal during his lunch, or giving him a thoughtful gift for no reason shows a Taurus guy that he’s with the perfect girl for him.

Every zodiac sign connects to an element of nature. These elements are earth, fire, air, and water. A sign’s element tells us a great deal about that sign’s disposition and strengths.

Taurus is an earth sign, and earth signs are known for being very practical, logical, and down to earth. They are the realists and the planners of the zodiac.

A Taurus man struggles to get in touch with his feelings and he hates dramatic displays of emotion.

His perfect partner is a woman who can control her reactions to her emotions and doesn’t need to have long conversations about how she’s feeling all the time.

He needs someone who thinks with her head instead of her heart and uses logic over emotion or even intuition.

A Taurus man always has a plan and he hates feeling unprepared. He doesn’t like surprises and you can always count on him to know what to do next.

The general Taurus man attitude is very cautious and practical. He always thinks before he acts and speaks, and he is most attracted to a woman who does the same.

He doesn’t match well with an impulsive, carefree woman. He needs someone as reliable and disciplined as he is, so a woman who struggles with self-control isn’t the best fit for a Taurus guy.

If you don’t know what you want in life or you struggle to stay in a routine, then a Taurus guy probably isn’t the right man for you.

A Taurus man takes a long time to commit to a relationship, not because he’s afraid of settling down, but because he doesn’t want to get hurt.

His deep desire for love combined with his reluctance to be monogamous makes a Taurus man confusing.

He wants to make sure he chooses the right person who won’t break his heart, which is what makes a Taurus male slow to commit.

If a Taurus man is not ready for a relationship, no amount of pressure will make him rush his decision.

The more you push him to commit to a serious relationship with you, the more likely he is to pull away.

A Taurus guy is attracted to a patient woman because he doesn’t want to be forced into a commitment he’s not ready for.

He prefers to take his time getting to know the woman he is dating inside and out before he makes any promises.

Although he will never show it, a Taurus man’s mind is full of worries and he can be very self-conscious, especially when it comes to love.

A Taurus man is insecure that his partner will break his heart by cheating on him or that another man will come along and steal her away from him.

He needs a partner who is completely faithful to him. She shouldn’t flirt or entertain the attention of other men.

Some zodiac signs like a little playful jealousy in a relationship, but a Taurus man simply won’t tolerate it.

As a sign connected to the earth element, a Taurus man needs a partner who is as steady as a rock.

He hates it when the people in his life are late, cancel plans, or break their promises. It hurts and disappoints him he calls a loved one in his time of need and they aren’t there for him.

What a Taurus man wants in a woman is dependability. He needs to know she will have his back and make him a priority, no matter what.

If his car breaks down on the side of the road, his partner should drop whatever she is doing to pick him up.

If he’s sick or feeling sad, the woman he loves should show up at his place with a funny movie, snacks, and tissues.

There is nothing a Taurus guy won’t do for his dear ones, and he hopes for the same reliability and helpfulness in return.

While the typical Taurus man’s communication style is honest and direct, he has a hard time expressing his romantic side verbally.

Men born under this sign aren’t very in touch with their emotions and they are uncomfortable discussing them, which makes Taurus men slow to admit their feelings.

But you will know how a Taurus guy feels about you from his non-verbal cues, such as his touch.

Taurus is a highly affectionate sign, so if a Taurus man likes you, he will show it by hugging you, rubbing your shoulders, or holding your hand.

A Taurus man needs an equally affectionate partner to feel loved and secure in the relationship.

He wants a sensual, loving woman who can’t keep her hands off of him and knows the power of her touch.

What to Do When Your Taurus Man is Angry?10 Ways to Win Back a Taurus Man After a Breakup
Hello, I'm Liz