9 Signs When an Aries Man is Done With You 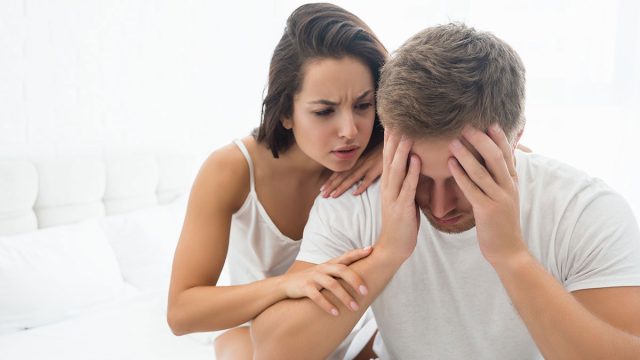 It’s usually obvious when an Aries man is done with you. It will often seem like his entire personality has changed!

Aries men can be warm, affectionate partners. They are loyal and dedicated. All that will go away when he’s ready to end your relationship.

One of these signs temporarily showing up doesn’t mean your Aries man wants to break up with you. He might be in a bad mood, or something else may be happening.

If an Aries man suddenly pulls away from you, stops showing you affection, and starts flirting with other women, that might be a sign he’s done with you! If this behavior is consistent, something is wrong.

Your Aries man will likely end things as soon as possible, though. He won’t string you along unless he has a good reason for sticking around.

If an Aries man is hot and cold before starting the relationship, that’s not a bad sign. It might take him some time to open up and be the warm, affectionate partner he can be.

If he’s suddenly moody out of the blue, that is a sign something is wrong. If he doesn’t open up and talk to you about what’s happening, your Aries man may be ready to break up with you.

It can be upsetting for an Aries man when he falls out of love. If he’s no longer happy in a relationship, he won’t be able to pretend things are okay. He’ll become incredibly moody and may return to playing hot and cold.

Usually, Aries men have good memories. They keep on top of things in their lives and will remember important dates such as birthdays and anniversaries.

Forgetting something minor isn’t always a sign your Aries man is done with you.

Even people with the best memories forget things now and then! If your Aries man constantly forgets or ignores essential dates, it might be because he’s over your relationship.

An Aries man who loves you and values your relationship would never forget your anniversary. He would do anything to ensure he’s free to spoil you on your birthday or spend a holiday with you.

If your Aries man is mysteriously busy on an important date, that’s likely not by accident! If your birthday goes by without a word from him, something is wrong.

An Aries man who genuinely forgot something would feel incredibly guilty afterward. If your Aries man forgets an important date and doesn’t seem to care, he might be over you.

An Aries man pulling away and making less time for you is a sign he may be over you. He might start canceling plans or never making them in the first place when he decides he’s done.

An Aries man not texting back for long periods can be a bad sign. Unless there’s no emergency keeping him from showing up or responding to you, he might just be done.

Even if your Aries man isn’t done with you, this is still a bad sign! He might be going through something he hasn’t told you about, or he may be too focused on himself for some reason.

Either way, talk to your Aries man. If he’s ready to end the relationship, he won’t care about canceling plans. An Aries man who still loves you will try to fix his behavior.

This magic will make your Aries man want a relationship with you.

One significant sign an Aries man is not interested anymore is that he will stop being physically affectionate.

Usually, Aries men are incredibly affectionate lovers. They are warm and caring toward their partner. If yours suddenly stops being affectionate for long periods, that’s a bad sign.

When your Aries man is done with you, you’ll immediately notice his lack of physical affection. It’s not necessarily the end of the world if he’s not in the mood for a hug one time, but if he stops you altogether, it might be.

An Aries man who won’t show you any physical affection might have fallen out of love.

If an Aries man wants to break up, he might start acting rudely toward you. Instead of being affectionate and respectful, he’ll become critical and harsh.

Nobody is perfect, so an Aries man who still loves you might say something insensitive now and then. He’ll usually apologize if he didn’t mean it, though. He won’t want to hurt your feelings!

When an Aries man is done with you, he won’t care about hurting your feelings. He might even go out of his way to criticize you excessively if he’s trying to make you break up with him instead of the other way around.

Your Aries man might be doing this on purpose, but it may also be subconscious. He might be frustrated that his feelings for you changed, and he’s lashing about because of that.

6. You Catch Him Flirting

One of the signs an Aries man is using you is that he’ll keep flirting with other women, sometimes in front of you. If he suddenly starts doing this, it might be because he wants to end your relationship.

If your Aries man is talking to another woman and openly flirting with her in front of you, he might be trying to make you jealous. He may also be signaling that he no longer cares about your relationship.

Aries men tend to be loyal partners. If you two have decided to be in an exclusive and committed relationship, he won’t want to be with anyone else. He won’t flirt with other women, especially not in front of you!

If you ever believe that your Aries man is flirting with someone else, try talking to him.

If it’s legitimately a misunderstanding, he’ll try to clear it up right away. He might brush off your feelings if he’s done with you and doesn’t care that you caught him flirting.

7. He Doesn’t Listen To You

Aries men can be great listeners. They aren’t always big talkers, but they will happily listen to someone they love talk about their day or tell them about their passions.

If your Aries man never listens to you, something is wrong. Being temporarily distracted is one thing, but outright refusing to listen to anything you say is a bad sign.

Aries men can sometimes be a bit self-absorbed, but they try to show the one they love how much they care. Your Aries man would never purposely ignore what you were saying unless something was up.

If your Aries man used to listen to your opinions and no longer does, that’s also a sign something is wrong.

He won’t necessarily always do what you say, but an Aries man who cares about you will generally at least listen to what you think.

8. The Passion Is Gone

An Aries man ghosting you might signify that the passion is gone. If he no longer feels any love or warmth in the relationship, he likely won’t stick around much longer.

Relationships go through ups and downs, so it might temporarily feel like the passion is gone sometimes.

Usually, your Aries man will try to fix that, though. He will also be on board if you try to spice things up and bring the passion back.

An Aries man who cares about you doesn’t want you to think he’s no longer passionate about your relationship. He will do anything possible to bring the passion back!

If you feel like the passion is gone because of him, that’s a sign he’s over you. If your Aries man doesn’t respond to any attempts to rekindle your relationship, it’s probably time to call it quits.

If an Aries man disappears and comes back, that’s not necessarily a bad sign. He might do that when he’s busy or in a bad mood.

If he’s constantly distancing himself and never seems to fully “come back,” he might be reconsidering your relationship.

Your Aries man may distance himself emotionally, but he might also physically distance himself. If you two live together, you might notice that he’s never home. He might stay at work for long hours or always be gone on a trip.

When an Aries man stops talking to you entirely without explaining why, something is wrong. If he is talking to other people and avoids you for a long time, he might be done with you.

Your Aries man might be distancing himself so that he has time to think things over before ending your relationship. He may just be waiting for the right time to end things.