What An Aquarius Man Wants To Hear 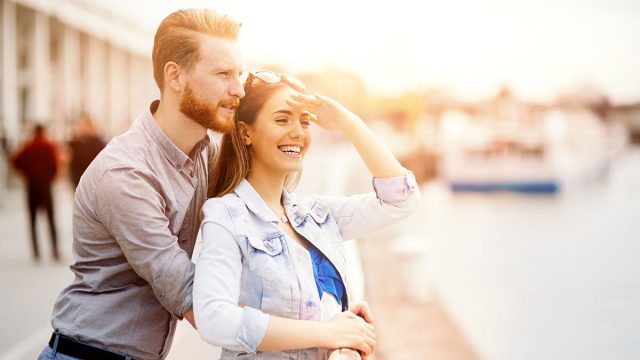 What an Aquarius man wants to hear from a woman is that he’s intelligent, unique, and creative.

Aquarius men pretend to be lone wolves, but they like when others recognize them! They also enjoy intellectual discussions, so always be prepared to teach them a few things.

Aquarius men get bored quickly, so they want to hear exciting things! Talk about your ambitions passionately. Tell stories about places you’ve been to or teach him about a subject he doesn’t know much about.

Aquarius men also love compliments, even if some pretend they don’t care. Tell him that he’s talented, creative, unique, and intelligent. He’ll love every word!

You should also recognize your Aquarius man’s independence and show gratitude when he’s a good friend or a supportive partner. It will be great hearing that you recognize the little things he does.

Talk About Your Ambitions

One of the signs an Aquarius man secretly likes you is that he’ll hang on to your every word. He wants to learn more about you, and a great way to let him in is to talk about your ambitions.

Aquarius men love to surround themselves with exciting and ambitious people. He’ll think you’re interesting if you have goals and passions that you’re happy to discuss.

Your Aquarius man doesn’t just want to talk about himself all the time. He wants to hear about you as well!

He will love receiving compliments, especially when he’s down, but that’s not all he wants to hear. If your Aquarius man cares about you, he wants to know about your passions and goals.

If he asks explicitly what your goals are, tell him! Your Aquarius man wouldn’t ask if he wasn’t interested, so don’t brush him aside or give a brief answer. Dive in deep and let him know as much as possible.

Teach Him Something New

If an Aquarius man is ignoring you, he might be bored. Stimulate him intellectually and get his attention by teaching him something new!

Aquarius men love learning new things. They are brilliant people, but they recognize that they don’t know everything. Your Aquarius man will always appreciate learning new facts from you!

If you aren’t sure how to talk to an Aquarius man, don’t worry too much about it. He’s an intelligent person who values knowledge. He will be more than happy to listen to you talk about a topic he knows nothing about.

Your Aquarius man will likely be happy to teach you something new as well. You two will probably have many conversations where you take turns teaching one another facts about the topics you’re interested in.

If you want to compliment an Aquarius man, one thing you should focus on is his creativity. He prides himself on his innovative thinking and artistic talents!

If your Aquarius man shows you a project of his, let him know what you honestly think. Be sure to slip in a few compliments, though. He doesn’t just want criticism if he’s sharing something with you.

Your Aquarius man will enjoy sharing his work with you more when you make him feel good about it. If he asks for criticism, you can offer it to him, but always be sure to lift him up as much as possible.

Tell Him He’s a Good Friend

Aquarius men genuinely value their friendships. They don’t always get the best reputation for being loyal friends, but they are!

Aquarians tend to have a different idea of what loyalty means than some other people. Your Aquarius man will be happy to hear that you think he’s a good friend, especially if his friendship isn’t always appreciated.

Let your Aquarius man know you appreciate it when he offers advice or supports you. Whether you two are just friends or something more, make sure you tell him what a great friend he is.

Aquarius men maintain their friendships with their partners after they start dating. If you’re his partner, you’re likely also his best friend. Let him know that you feel the same way!

When your Aquarius man is feeling down, remind him of what a good friend he is. Offer to support him as your way of returning all the support he’s previously offered you.

Aquarius men typically have many talents. Some are unconventional and may not always be appreciated, so he’ll love it when you notice them!

Pay attention to your Aquarius man so you can uncover his hidden talents. If he seems particularly proud of specific skills, make note of that too!

Compliment your Aquarius man on those skills whenever you can. Tell him that you think he’s incredibly talented, and then point out why you believe that.

Your Aquarius man will love having his ego stroked a little bit, but you need to be specific. He doesn’t want false flattery!

If your Aquarius man is ever feeling underappreciated, he’ll love that you notice the talents he has that nobody else does. He’ll be grateful that you took the time to highlight the skills you’ve noticed.

Remind your Aquarius man of how skilled he is if he’s ever feeling discouraged. Let him know that minor setbacks don’t change the fact that he is an incredibly talented man.

This magic will make your Aquarius man want a relationship with you.

Say You Value His Ideas

If an Aquarius man is expressing feelings or telling you about an idea he has, don’t just passively listen. Tell him how much you appreciate him expressing himself to you!

If you work with an Aquarius man, he’ll love hearing that you value his input and ideas. When he shares something with the group, tell him you appreciate it!

Not all your Aquarius man’s ideas will be ones that are turned into reality, but that doesn’t necessarily matter to him. He likes knowing he’s valued and that his input isn’t ignored.

Your Aquarius partner will love hearing that you value his opinion as well. When you ask for his opinion, point out that you’re doing so because you appreciate his keen observations and creative input.

Even if you have to disagree with something your Aquarius man says, you can still let him know that his ideas are valued. You don’t need to make him feel bad for sharing them.

Communicating with an Aquarius man is easier than you think it is. You can keep him happy and hold his attention when you recognize his intelligence and compliment him on it.

One of the best compliments for an Aquarius man is hearing that someone thinks he’s intelligent. If you value his intellect, let him know that!

This is another area where it’s essential to be specific. Don’t just tell your Aquarius man that he’s smart. Tell him why you think so.

If your Aquarius man knows a lot about a particular topic, point that out. If he gave excellent advice that helped you out, let him know that as well!

Your Aquarius man might already know he’s intelligent, but it never hurts to hear that you think so.

Notice How Unique He Is

An Aquarius man’s personality tends to be incredibly eccentric, and he likes it that way! If you notice something unique about him, comment on it.

Your Aquarius man might have a unique way of dressing or speaking. He may have an exciting worldview or always offer unique opinions on things. Point this out when you notice it.

An Aquarius man’s behavior makes more sense when you understand that he wants people to think he’s weird. He loves it when people tell him something he does is strange or unique.

Your Aquarius man will likely take being called weird as a compliment. That’s not an insult to him at all! He will love it when you call him weird affectionately or point out something odd he does.

An Aquarius man will always be happy when others recognize his uniqueness. This is an easy way to lift his spirits.

What an Aquarius man needs more than anything is a partner who recognizes his freedom and independence. He wants to hear that you appreciate his independent nature.

This is something an Aquarius man needs to hear if you two are committing to a relationship together. He needs to hear that you value his independence.

An Aquarius man in love will still want his freedom. You must make it clear that you won’t ever try to take that freedom away from him.

Aquarius men will always be independent, no matter how committed they are to their relationships. Your Aquarius man will appreciate it when you do not want to change that about him.

Your Aquarius man will want to hear that you can also be independent. Make it clear that you want to be with him but have no desire to stop living your own life. He will likely fall even more in love with you when he knows that.