10 Key Tips to Getting a Virgo Man’s Attention 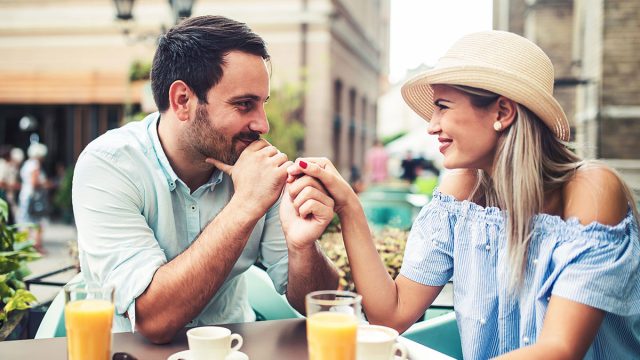 A Virgo man has a clear idea of the ideal woman. Understanding a Virgo man will help you plan exactly how to get his attention.

You have to put yourself in his shoes and learn what he likes and dislikes in a woman.

If you want to know how to attract a Virgo man you have to learn to think like a Virgo man. That’s because Virgo men are primarily intellectual, not emotional.

He can resist his longings and emotional desires if they don’t line up with his logical beliefs. His style baffles women who are used to appealing to the emotional or sexual desires of their love interests.

If you don’t know how to attract a Virgo man specifically, though, your attempts could backfire. Even a Virgo man in love will act detached. You need to be subtle to attract his attention.

1. Keep Your Appearance Meticulous and Neat

One of the most important things you need to know about how to attract a Virgo man is to pay attention to your appearance. But not in the way you expect. You don’t have to look like a woman on a magazine cover.

He’s not into the superficial glamor of your appearance. He looks for signs that you are healthy and neat. To get a Virgo man to notice you, keep a tidy appearance. Shabby grooming is a pet peeve for a Virgo man.

He’s detail oriented so he notices if your clothes are wrinkled or food stuck in your teeth. He’ll notice signs of good hygiene. If he sees that you are organized and not always fumbling to find your phone or keys, this also helps.

He’s less concerned about your fashion sense and more concerned about whether you took time to take care of your body. He’s health conscious and meticulous and wants to see that you are too.

It’s not fair to judge a book by its cover, but a Virgo man will assume that a disorderly physical appearance is caused by a hectic lifestyle. He has no tolerance for drama so he’ll be turned off by a disheveled appearance.

Even though he notices your appearance, when a Virgo man likes you, it’s your mind he’s attracted to. Get a Virgo man to pay attention to you by showing him your intellectual powers.

When you make reference to literature and quote the classics, he’ll be impressed. This is one example of how to attract a Virgo man on social media. He’s less concerned with your most seductive selfies. Instead post quotes from your favorite books.

While you’re getting his attention through social media you can also show your intellectual interests. Post about classes you’re taking or even share some of your own writing. Show him you’re a critical thinker and don’t go along with the crowd.

3. Impress Him with Your DIY Skills

Learn to change the oil in your car or repair things around your home. Gardening, making candles or making your own alternative healing teas or hygiene products will also get his attention. A Virgo man loves to see talents put to practical use.

He’s attracted to your independent nature and the pragmatic talents you have. Show him a balance between being informed but also being teachable.

Ask for his help learning new skills or trades that he’s already mastered. He’ll pay more attention to you if he feels like he has an important purpose in your life. Show him you’re using the skills he teaches you and appreciate his time.

4. Always Be on Time and Prepared

One way you don’t want to get a Virgo man’s attention is by being late. You’ll stand out to him for sure, but not in the way you were hoping. Be on time and make sure you’re prepared.

If you are held up once and run late, he’ll forgive this if you make him aware as soon as possible. He’s methodical and his schedule is important to him. He’ll feel disrespected if you are routinely late.

Virgo men can be patient but they also get frustrated if things don’t go according to their well regulated schedules. He needs to feel in control and will look favorably at a woman who can keep timely commitments.

To impress a Virgo man and get him to notice you and pay more attention, show him that you pick up on the details others miss. He’ll want to be around someone who is as observant and smart as he is.

This is not an easy task for him. Plenty of women match his intelligence but not every woman takes the time to slow down and notices things that he thinks are important. Stand out from the crowd by remembering his favorite things.

Then when he doesn’t expect it, make casual mention of his likes and dislikes to show him you were really paying attention. He’ll be thrilled and want to spend more time with you.

6. Be Direct and Honest, but Keep Communication Brief

If you want to know how to make a Virgo man chase you, communicate slightly less than he does. Keep your conversations short but also interesting. If you are too elusive, he’ll assume you’re not interested.

But if you’re interesting, to the point and a minimalist, he’ll want to get you to open up more. You don’t have to impress him with grandiose stories. He cares more about daily life.

Your honesty will and direct style will make him want to communicate with you more. He’d rather hear the truth, even if it’s harsh, than to be misled. He expects and gives total honesty.

7. Show Him You are Organized

He’ll pay more attention to you and want to be in your company if your time together is smooth and lowkey. He’s not one to chase excitement and adventure.

Show a Virgo man that you’re organized and have your own life pretty well under control and he’ll feel like he’s found a kindred spirit. He’ll want to spend more time around you as a result.

If you want to know how to make a Virgo man miss you, you’ve got to create his ideal setting. When he’s away from you, he’ll not only miss you as a person but he’ll also miss the sense of peace and serenity he felt in your presence.

8. Ask for His Help or Advice

One of the physical signs a Virgo man is falling for you is that he’ll offer help and advice to make your life easier. This is where keeping his attention can become tricky.

He needs to see that you’re efficient and organized enough to help him feel secure. At the same time, he needs to feel like he has a purpose in your life.

If you’re too self-sufficient, he won’t feel like he can do what he likes to do best, help people fix their lives. But if your life is a total mess, he’ll back away. He needs to feel needed, on a practical level at least.

Let him offer you advice and help. Be sure to follow his guidance or he’ll think you’re taking him for granted or wasting his time.

Once he is paying attention to you consistently, look for other physical signs a Virgo man likes you. When you see that he’s bringing thoughtful gifts, for example, or offering to fix things, then he’s definitely interested.

You then can engage him more by asking his advice. Ask for his help but don’t do so frequently or he’ll think you’re needy. Treat him like an expert and respect his advice and opinions.

9. Show Him You’re Friendly, but Don’t Be Demanding

Virgo men have a deep desire to be of service. They may need to be friends for a period of time before allowing their attraction to deepen. Don’t put demands or ultimatums on him.

In particular, don’t put demands on his time or schedule. He is tied to his routines and will feel any interference as if it was a great disruption. It will scare him away.

Instead show him that you are a good friend. Use the time as friends to demonstrate that you match his vision of the ideal woman. Don’t expect him to fall in love fast.

He doesn’t do anything fast. Instead show him who you are as a committed, responsible, loyal and honest friend. He’ll start to fantasize about being more than friends when you match his ideals.

10. Show Him You’re Helpful to Others

Don’t just show your caring and friendly nature to your Virgo love interest. Let him see that you are friendly and reliable both to him and others . He also needs to see that you are a thoughtful and considerate person in general.

If you are not helpful and kind to those in need, he’ll see you as cold and be turned off by this. Even if you don’t absolutely love kids, be patient and kind around them.

Show respect for the elderly, those with varying abilities and those who have health issues or are vulnerable. It will warm his heart to see how considerate you are. He’s conscientious and will notice that you are too.