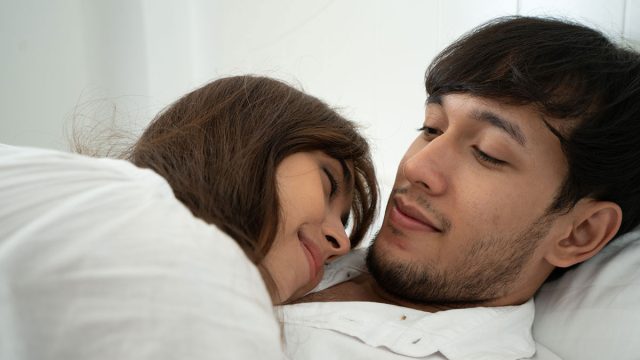 If you’re dating a man born under the sign of the bull, you may wonder, does a Taurus man cuddle or prefer to have lots of personal space?

Every sign has a different way of expressing love, and some signs are more touchy-feely than others.

So, how can you tell if a Taurus man wants you to keep your hands to yourself or if he wants you to show him lots of affection?

By learning more about this zodiac sign’s astrological aspects and personality traits, you will have a better understanding of whether or not Taurus men like to cuddle.

If you are a sensual person who craves affection in a relationship, then you should seek out a Taurus man.

Taurus is perhaps the cuddliest sign of the entire zodiac, so a Taurus man will happily give you all the affection you could ever need.

When he can’t keep his hands off of you and looks for excuses to touch you, it’s one of the signs a Taurus man has a crush on you.

And there is nothing a Taurus guy in a relationship loves more than spooning his partner in bed, holding onto her tightly throughout the night.

One of the reasons that a Taurus man is so affectionate and cuddly is that he is sensual in every way. He not only likes cuddling, but also all other forms of stimulating his sense of touch.

Taureans often get a reputation for being hedonists because they are very in touch with their physical senses and love to indulge them.

Taurus men are hard-working and great at making and saving money, but they are equally good at spending it.

They love the finer things in life and enjoy splurging on sensual experiences like a day at the spa or fine dining.

It stands to reason that Taurus men love cuddling and touching their partners so much because they love pleasuring all of their senses.

You can use this knowledge to your advantage by dressing to make yourself irresistible to your Taurus crush.

If you want to know what to wear for a Taurus man, put on a silk or velvet dress for your date. Wear your hair down and loose, and apply lotion to make your skin soft and smooth.

Your Taurus man won’t be able to resist touching the fabric of your outfit, your luscious locks of hair, or your silky, supple skin.

Taurus men are not only cuddly with their partners. They are affectionate with everyone that they like, including their friends, family, and coworkers.

Paying attention to who your Taurus guy is affectionate with is a great way to tell who he likes and dislikes.

If he greets an acquaintance with a hug or a handshake, it means that he truly gets along with that person.

If he keeps his distance and just smiles politely and says hello, it means he doesn’t have a close connection with that person.

This also means that a Taurus man gets touchy-feely with women other than his partner because it’s how he communicates friendly feelings.

Don’t get upset if your Taurus partner is affectionate with his female friends. It doesn’t mean he’s sexually attracted to them; it’s just his way of showing familiarity.

They Will Cuddle in Public

Some signs accept public displays of affection more than others, and even the most touchy-feely signs may not like PDA.

But Taurus men in relationships have no qualms about physically expressing their love for their partners in a public setting.

A Taurus guy is refined and conservative, so he won’t want to engage in aggressive or overtly sexual PDA.

But he loves holding hands, cheek kisses, and cuddling while sitting together, regardless of whether or not you are in front of other people.

A Taurus man likes to cuddle so much that he will do it any time and any place, no matter where he is or who is watching.

Their Planet Makes Them Cuddly

One of the astrological aspects that might explain why Taurus men are so cuddly is their ruling planet.

Every sign is guided by a particular heavenly body that tells us something significant about that sign’s personality and behavior.

Taurus is ruled by Venus, the planet of love and beauty. Venus’s influence makes Taurus one of the most romantic and loving signs of the entire zodiac.

Physical affection like cuddling just comes naturally to a Taurus man, thanks to his sign’s guiding heavenly body.

Cuddling is Their Love Language

Each sign has different ways of expressing love. One of a Taurus man’s favorite love languages is physical touch, which makes him very cuddly and affectionate.

A Taurus man’s communication style is typically honest and direct, but it’s hard for him to express his emotions verbally.

He is great at giving advice and truthful opinions, especially when it comes to work, scheduling, and other practical matters.

But when it comes to his feelings, a Taurus guy has a difficult time opening up and saying how he feels.

He will show you that he loves you with his touch instead of his words. He’ll cuddle you, hold your hand, and kiss you instead of saying, “I love you.”

If you want to know how to communicate effectively with a Taurus man, you need to pay attention to his nonverbal cues.

Know that he tells you how he feels about you through cuddling, and cuddle him back to let him know that you love him, too.

They Need Cuddling to Feel Secure

Not only does a Taurus man enjoy cuddling, but he also actually needs it to feel secure in a relationship.

Although he appears strong and does a great job hiding his vulnerability, a Taurus man gets self-conscious easily.

He needs the reassurance of your touch, especially cuddling, to let him know that you love him. A Taurus man won’t be happy in a relationship with someone cold and aloof.

If you aren’t normally the cuddly type, you’re going to have to have patience with a Taurus man.

You need to tell him that you’re not a very touchy-feely person and that cuddling doesn’t come naturally to you. But at the same time, you will need to work on being more affectionate if you want to keep him.

On the other hand, if you want to know how to destroy a Taurus man, all you need to do is withhold cuddling and refuse his offers of affection.

When you reject his touch, it feels like you are rejecting his love.

They Use Cuddling to Initiate Intimacy

A Taurus man doesn’t use cuddling only as a way to express his love. He also uses it as a way to get the ball rolling in bed.

When you’re with your Taurus man in bed, he may use cuddling to initiate intimacy. He will start by spooning you or pulling you close, then turn his display of affection into something naughtier.

This doesn’t mean that he only cuddles with you because he’s trying to have sex. There will be plenty of times when he’s content just to snuggle.

But sometimes, your Taurus guy will use cuddling to communicate that he’s in the mood for intimacy. Pay attention to his cues and reciprocate if you’re feeling frisky, too.

Their Introversion Makes Them Cuddly

Many of his personality traits make a Taurus man so cuddly, and one of them is his introversion.

A Taurus man is so warm and gregarious, it’s no surprise that he’s a popular guy. He enjoys spending time with his friends and family, but he loves being alone with his favorite person even more.

There is nothing a Taurus man in love likes more than curling up on the couch with a good movie, some snacks, and his partner.

His introversion and need for some time at home to recharge is part of what makes him such a cuddly, snuggly guy.

If you always want to go out and party, a Taurus man might not be right for you. He is social and outgoing, but he needs plenty of time alone to cuddle with you to be content.

Their Cuddly Nature Is Surprising

For those who don’t know him intimately, it may come as a surprise that a Taurus man is among the cuddliest signs of the zodiac.

Although he is sweet and loving, he has a tough exterior and may not seem as romantic and lovey-dovey as he really is.

The truth about Taurus man is that he saves his passionate, snuggly side only for the woman he is in a committed relationship with.

His friends, coworkers, and family might not ever get to see that he is as cuddly as a teddy bear when he’s alone with you.

But even the toughest Taurus who is the most resistant to love has a cute, cuddly side, and if you are the right woman for him, he will show it to you when he’s ready.