Best Ways to Communicate with a Taurus Man 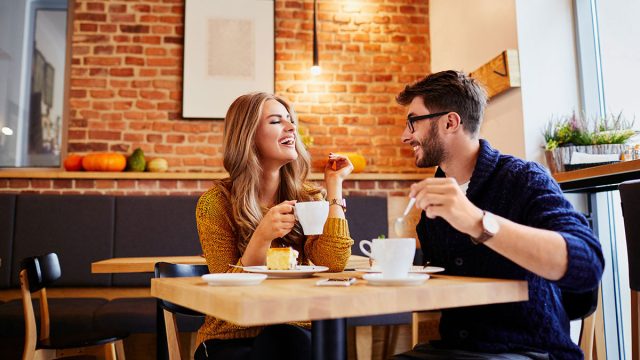 A Taurus man’s communication style can be summed up as deliberate and well thought out.

This is a man who thinks before he speaks. If you like fast responses, he might be thinking a little too much for your taste.

Communicating with a Taurus is about more than just words. How you say something is just as important as what you say. Eye contact and body language are also important.

Taurus is an Earth sign. Like Virgo and Capricorn, he can be practical and direct in the way he speaks. But, unlike them, he isn’t as judgemental or “cold.”

If you’re struggling to find something to talk about with a Taurus you’ve just met, try talking about food or nature-related topics. He’ll also enjoy hearing about your passions, hobbies, and interests. Feel free to speak at length about those.

Communication isn’t all about just words. Sometimes, a glance communicates more than words ever could.

Taurus’ communication style doesn’t involve intense eye contact like with Scorpio or Gemini. Instead, this is a man who seeks out meaningful looks. However, he also knows when to look away.

You may also find that he avoids eye contact sometimes. He can be shy at times. If you are someone who likes deep, constant eye contact while with somebody, you may just be overwhelming him.

His gaze will drift if he’s deep in thought or if he doesn’t want you to be able to “read” him. So just wait for him to initiate eye contact again, and don’t rush it.

If you’re having trouble finding the right words, catch his eye. That might be all he needs to understand what you’re actually saying.

When a Taurus man goes quiet, this doesn’t necessarily mean he doesn’t want to talk to you anymore. Instead, he might be thinking of what to say next.

Pay attention to his body language, and you may find he’s still actively engaged in the conversation.

If he is facing you and leaning toward you, he’s still listening. It will be like he’s gravitating toward your words and your body.

He might keep some physical point of contact between you two as well. If he’s got an arm around your shoulder or your thighs are pressed close together, he’s still “with you” in terms of conversation.

If he is leaning away, avoiding eye contact, or appears stiff, that means he probably doesn’t want to talk anymore for now.

Mirror these movements when speaking to him. For example, don’t cross your arms or look at your phone.

Instead, put a hand on his, look at him, lean in while he speaks. This will show him you’re not only listening but that you’re engaged in the conversation.

You don’t have to keep all your conversations at surface level when getting to know a Taurus man. He won’t be scared off by you asking questions about him or if you go off about one topic for hours on end.

If he enjoys a particular topic, he can most likely talk at length about it. Don’t just sit back and listen. Ask him questions, ask for clarifications, make connections, and share your own related stories.

Don’t be afraid to ask personal questions. This will show him that you’re interested in getting to know him and that you care about who he is as a person.

Talking about your passions, regardless of what they are, can really show your true personality. Talking at length about your hopes and dreams will show him that you’re driven. Showing off your art will display your creativity.

He’ll tell you all about what he likes as well, and he probably likes plenty of things! A Taurus man doesn’t always have a plan for how he’ll reach his goals, but he sure is passionate about them.

Listen to him sharing his passions with as much attention as he gives you. Even if they’re not things you’re also passionate about, you might learn something new.

But, of course, it’s also just enjoyable to watch somebody be so excited about what they’re talking about.

Food is always a good topic if you’ve just met and aren’t sure what to talk about with a Taurus man.

Taurus’ way of thinking can be very food-centered. This is a man who loves to cook, sample new cuisines, go to high-end restaurants, etc. However, the way to his heart is definitely through his stomach.

You don’t have to be a 5-star chef to please him, though. Do you enjoy watching cooking shows? Tell him about some of the recipes you’ve seen on those.

Are you a person who takes pictures of your food everywhere you go? Show him!

If you do enjoy cooking, tell him all about it. What’s your favorite thing to cook? What’s your least favorite? Who taught you to cook? Stories about baking with your grandmother or learning to grill from your dad will go right to his heart.

Another good topic of conversation is nature. Taurus is an Earth sign. This is a man who is very connected to that element, sometimes in a literal sense.

Taurus might enjoy activities that allow him to be out in nature, like hiking or gardening. He may even have a job that is nature-related.

Are you struggling to find something to talk about? Talk to him about your favorite flowers. Ask him where he likes to go hiking or what beaches he likes.

Nature-related activities are suitable too. Show off that herb garden you’ve got on your porch. Take him to the zoo and chat about all the animals you see.

A Taurus man’s communication style can be very straightforward. This doesn’t mean he’s overly blunt like other signs, just that he thinks things over and says what he truly means.

If you ask his opinion on something, he’ll give you his true opinion. Of course, he might say it in a less judgemental way than a Virgo man would, but he won’t lie to spare your feelings.

Taurus’ communication problems happen when people around them aren’t so forthcoming. If you tell him something, he’s likely to take it at face value.

He won’t look for hidden meanings. He’s not going to figure out what you’re “really saying,” so be straight with him.

If a Taurus man refuses to communicate with you, it might be because he thinks you’re too harsh or unfriendly.

This might seem odd, considering his straightforward approach to communication. However, keep in mind that straightforward does not mean rude! You can tell the truth without being awful about it.

Taurus men prefer people who are easygoing, laidback, and friendly. He doesn’t have time to play games, and he doesn’t want to be around people who bring him down.

He is a physical person, so feel free to show some friendly affection while getting to know him. Hug him, pat his shoulder, touch his arm while you’re speaking.

Most of the time, Taurus men like to think before they speak. So if he does say something in the heat of the moment (during an argument, for example), he’s likely to come back later to explain and smooth things over.

If you ask a question and he goes silent, it just means he’s considering what you’ve asked and coming up with the best response.

A Taurus man’s texting style tends to be slow-paced as well. So if you are the type of person who expects immediate responses, understand that you’re not going to get them from a Taurus.

You might think your Taurus man has bad communication skills if he goes a day or two without responding to your text. But, this isn’t necessarily the case.

He might have been in a bad mood when you texted, and he’s waiting until he feels better. Maybe you asked a question, and he didn’t know the answer, so he’s looking into it. He wants to give you a good answer, not a quick one.

Like the other Earth signs, Taurus has a practical mind. Therefore, his communication style can be very practical as well.

If you are caught up in your emotions over a fight with a friend, you can count on Taurus to stick to the facts. If you were in the wrong, he’ll tell you why he thinks so. He won’t side with you just because he likes you.

He is good at removing his emotions from a situation and conveying information in a practical manner. He may prefer people who also communicate this way. If you don’t, just make sure you understand where he’s coming from.

10 Taurus Man Negative TraitsTaurus Man in Marriage: What Kind of Husband is He?
Hello, I'm Liz