10 Signs a Taurus Man is Ready to Commit 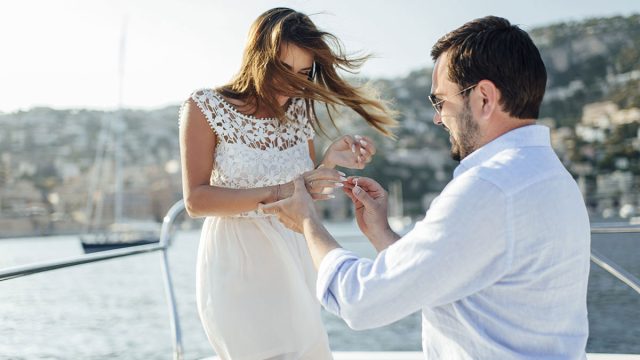 A Taurus man commitment must be earned. Even when he seems to care, he will remain aloof.

It can take years for a Taurus man to make things official. You’ll need to know how to tell when he’s ready to get serious.

A Taurus man who is slow to commit can be frustrating to the woman who loves him. You may know he’s perfect for you, but he continues to hold out.

How does a Taurus man test a woman? He keeps her waiting and sees how she responds. If you are grounded, practical and aren’t intrusive, there is a good chance he’ll commit in time.

If you’re wondering “Why won’t my Taurus man commit?” it may be too soon for him. Taurus men are notoriously slow, especially when it comes to commitment.

1. He Changes His Profile

A Taurus man’s commitment issues are legendary. Yet when he finally breaks through, he will show subtle signs that he’s really ready to buckle down and get serious about the relationship.

Some of the signs a Taurus man will show you when he is ready to commit to you will start with his online persona. He will take down his profile from dating websites. He’ll change his status on social media. He may still be discreet and not name you as his partner.

But he will change his status from “Single” to “In a Relationship.” He may not even tell you that he’s done this, you’ll have to see for yourself. The signs a Taurus man is ready to commit may start in the periphery and then show up in more personal ways.

But initially, he’ll test the waters by doing small things. He’ll reflect the serious commitment by finally acknowledging that he’s taken, when it comes to social media. He may even begin posting a few pictures of the two of you together.

2. He Introduces You to Family

When a Taurus man misses you, he will start to consider commitment on a more serious level. Sometimes you have to give him space. One of the more obvious signs of commitment will be his willingness to let you meet his family.

He may invite you over for a picnic or a holiday dinner. He may just stop by for a casual visit with his parents and invite you to join him. Either way, when a Taurus man lets you in to his inner circle, he means business.

A Taurus man who wants you to meet his family is showing he has a deeper level of trust for you. He is showing you that he wants you to be a serious part of his life for the long run. Otherwise, he would keep you at arm’s length.

Taurus men love to compartmentalize. They know how to keep people in separate zones. They have work friends, personal friends, dates and their closest inner circle of friends, who are like family to him.

When he’s getting serious about commitment, he’ll move you from the “dating” zone to the “inner circle” and meeting his family is part of this. Don’t overlook the importance of this move as a step up in terms of a Taurus man’s commitment level.

A Taurus man not ready for relationship will still date. He’ll take his time to enjoy casual fun with a beautiful woman. He’ll remind you again and again that he doesn’t want anything serious. He has strong boundaries and will make sure you know it’s not serious.

But when a Taurus man is ready to commit to you, he’ll start to talk about exclusivity. When he brings up the discussion about defining the relationship, it could mean he’s ready to commit.

When a Taurus man finally talks about his desire to stop casually dating and exclusively commit to you, he’s giving the relationship the green light to move forward. This is a major step for Taurus men who fear commitment.

When you know how to handle a Taurus man, you’ll know how to wait out his indecisive nature. He procrastinates, so you’ll have to be patient while you’re waiting for him to step up to the plate and commit.

A Taurus man’s slow courting style can make it frustrating to date him. When you think he’s taking too long and you’re ready to move on, he’ll suddenly surprise you by telling you he wants to move in together.

This may take you by surprise. You may have been on the verge of counting him out. A Taurus man who tells you he’s ready to get an apartment together or wants you to move in to his house, is showing a sign of serious commitment.

A Taurus man can go for years dating the same person but living in different locations, even sometimes in different geographic locations. He loves the bachelor lifestyle and is possessive about having his own place. As much as he may love to visit you, he may not be ready to have you in his space all the time.

When he turns this corner and starts talking about living together, he’s taking a major risk. He’ll only do this if he’s really ready to become serious and commit to you. He doesn’t look forward to sharing expenses or having to compromise over use of shared rooms. It’s a major move for him to want to embrace this.

When a Taurus man chooses you, he will eliminate all other options. If he’s maintained a casual relationship with his ex, he will cut ties with her completely when you become serious as a couple.

When a Taurus man is ready to commit, he may unfriend or block his ex. He may find other ways to make the boundaries clear, she is his past and you are his future. When you see a Taurus man moving farther from any connection to his ex, it’s a good sign.

This is an indicator that a Taurus man is really ready to commit to the relationship and is serious about you. A Taurus man will want to make it clear you have no competition.

A Taurus man who is casually dating will show great interest for weeks at a time, then he’ll go quiet and seem cold. But when he is ready to commit to you, a Taurus man will become consistent. He may still have a slow pace but it will be slow and steady.

He’ll text you every morning and evening, even if he is still a man of few words. Look for signs of consistency, even if he’s not as passionate and attentive as you prefer. A Taurus man who is ready to commit will continually show up for you.

He won’t cancel dates. He won’t go through periods of running hot and cold. His communication may improve or at least he’ll make a more concerted effort to stay in touch with you on a regular basis.

He will check in with you more frequently and will show an effort to stay in touch or even video chat rather than just texting a few words here and there. He will want to spend more time talking with you.

He will also keep you posted about his plans and will tell you what he’s doing. These are things a Taurus man doesn’t do when he’s just casually dating. It’s easy to become jealous or suspicious because he goes quiet and doesn’t tell you what he’s up to.

But this changes when he’s in love and ready to commit to you. When he commits to you, a Taurus man will make you a part of his life. He’ll let you know what his plans are and keep you in the loop by increasing his communication.

8. He Defines the Relationship

A Taurus man who is ready to commit will become more concerned about how the relationship is defined. He will be sure to clarify that you are now an exclusive couple or that his expectations are for monogamy and commitment.

He will have no problem spelling this out because he prefers having things defined and clear. He will want to establish the boundaries and expectations of the relationship. He will specify that he wants to be your partner and that he is now serious about you.

A Taurus man will start to talk about subtle nuances. He will want to make sure that you know the finer details that make your relationship in the present different from what it was in the past. He may suddenly make new demands as well.

A Taurus man will become jealous if he is ready to commit to you. He can be possessive. When he’s ready to make a commitment, he can show it by questioning your relationships with other guys.

When a Taurus man suddenly becomes possessive or asks why you didn’t call back right away, this can be a sign he’s taking the relationship more seriously than he did before.

He’ll also question how you know different men on your social media timeline. He will become jealous of you if you show any attention to other men and it may take some time to reassure him that you’re just friends.

A Taurus man will invest in you when he’s ready to commit to you. He will want to put his money where his heart is. Taurus men often use money to show their love and connection.

He’ll buy you expensive gifts, he’ll help you to pay for car or home repairs. He will show you that he takes the relationship seriously by talking about splitting the bills when you move in together.

Taurus men don’t do this when they are casually dating. Beyond paying for dinner, don’t expect much from a Taurus man when you’re not in a serious relationship. Instead, count on him to hold on to his money until he feels ready to make a solid commitment.

How to Avoid Making a Taurus Man Break Up with You10 Things That Make a Taurus Man Complicated
Hello, I'm Liz