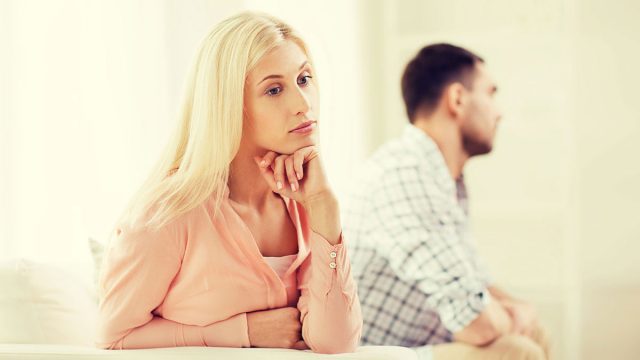 If your relationship with a Taurus guy is on the rocks, then you are probably wondering about the typical Taurus man breakup signs.

How can you tell if he’s close to ending the relationship?

Each zodiac sign handles breakups differently based on their personality traits and behaviors in love.

If you want to know whether or not your Taurus partner is going to break up with you, you need to look no further than his astrological sign.

Once you have a better understanding of how his sign acts when he’s falling out of love, you will be able to recognize when your Taurus man is about to break up with you.

The typical Taurus man’s communication style is straightforward and direct, but only regarding practical issues.

When it comes to matters of the heart, a Taurus guy has a much harder time expressing himself verbally.

One of the reasons it’s so difficult for him to share his feelings is that he isn’t very in touch with his emotions, so he might not recognize how he feels well enough to show it.

This means that when a Taurus guy wants to break up with you, the first thing he will do is become passive-aggressive.

He won’t tell you directly that he’s not feeling good in the relationship because he probably doesn’t even realize it himself.

Instead, he may pick fights with you over little things or act in ways that he knows drive you crazy because he doesn’t know what else to do.

2. He Gets Cranky and Irritable

A Taurus man is usually an easy-going, laid-back guy. He is a natural peace-maker and likes to keep everyone around him happy. He goes out of his way to be polite and he never wants to hurt anyone.

But when your Taurus man is close to breaking up with you, he will become irritable and cranky around you more and more frequently.

Suddenly, things about you that never bothered him before will annoy him. You may feel like you’re walking on eggshells every time you’re around him.

If he is difficult to be around and gets mad at you for the smallest things, it’s a sign that your Taurus man is close to ending the relationship.

When a Taurus man says he loves you, it’s an implicit promise that he will be faithful to you.

This sign rarely cheats, but when a Taurus man is done with you, the love that keeps him loyal to you no longer exists.

A Taurus man needs physical touch and intimacy to feel loved and fulfilled, but if he no longer loves you, he will find that intimacy somewhere else.

If you’re wondering when to give up on a Taurus man, you should know that it’s incredibly difficult for this sign to move past infidelity, whether he’s the one who cheated or you.

Even if he feels guilty and sorry for cheating on you, he will view the relationship as tarnished beyond repair.

When a Taurus guy cheats on you, there is nothing left of the relationship to work through. Your best bet is to break up and move on instead of trying to fix the damage.

4. He Spends Less Time With You

When a Taurus man breaks up with you, it may be a slow burn until the final termination of the relationship.

He will start by putting lots of physical distance between you because he doesn’t want to be around you and he wants to see what it would feel like without you.

Spending quality time together is one of a Taurus man’s favorite love languages, so when he doesn’t make an effort to see you, it likely means he has fallen out of love.

If you notice that he’s spending a lot more time at work, with his friends, or anywhere besides at home with you, it could mean that your relationship is in trouble.

A Taurus man likes an assertive woman who is so attracted to him that she initiates sex, but he also likes to take the dominant role and get the ball rolling in the bedroom.

When your relationship with a Taurus man is strong, he will want to have sex with you frequently because it makes him feel connected and it’s one of the ways he shows his love.

A Taurus man is very physical and affectionate, so when he no longer initiates sex with you, it’s one of the biggest signs that a Taurus man has lost interest in your relationship.

It’s normal for anyone’s sex drive to have ups and downs. If your Taurus man seems less libidinous than usual, it could just be that he’s tired, stressed out, or just not in the mood.

But if your Taurus guy goes from initiating sex all the time to not at all, or he pushes you away when you approach him for sex, it’s an indicator that a breakup is coming.

The way that a Taurus man touches you tells you a lot about how he’s feeling about you.

Although he may not be the best at expressing himself with words, you will know how your Taurus guy feels by the way he interacts with you physically.

A Taurus man in love is highly affectionate and can’t keep his hands off of his partner. He loves cuddling, kissing, and holding hands to feel close to his loved one.

But if your Taurus man doesn’t initiate contact with you, or if he only approaches you for sex and no other form of physical affection, it’s a bad sign.

7. He Doesn’t Prioritize You

A Taurus man is very romantic and when he loves a woman, he prioritizes her over everyone and everything else.

When you’re in a committed relationship with a Taurus guy, you can count on him to put you before his friends, family, and his job, even though all of those things are very important to him, too.

But when a Taurus man is close to breaking up with you, it will suddenly feel like you are at the bottom of his list of priorities.

He will behave selfishly and he’ll take care of everybody else before you because he doesn’t care about you the same way anymore.

Taurus men are typically very honest and direct. They hate lying and it doesn’t come naturally to them.

If anything, a Taurus guy is usually honest to a fault. He cares about how other people feel, but he can come off as insensitive because he doesn’t know how to sugar-coat the truth.

If you’re wondering how to know when a Taurus man is done with you, catching him in a lie, especially a big lie, is a strong indicator that something is wrong.

When a Taurus man lies to you, even if it’s a small white lie, it means he has something to hide.

He could be hiding his true feelings about you, an affair, or something else that spells trouble for your relationship.

9. He Is Harsh and Insensitive

Although a Taurus man is always honest and direct, he usually tries to be careful with his words so as to avoid hurting anyone’s feelings.

But when your Taurus man is close to breaking up with you, he will stop being so careful and won’t care whether or not he hurts you with his insensitivity.

If you feel like your Taurus man is testing you by being so cruel, you are probably right, although he may be doing it subconsciously.

He might be mean to you because he’s trying to push you away. By being unkind, he can give you a reason to break up with him so that he doesn’t have to be the one to end the relationship.

Taurus is one of the most controlling signs of the entire zodiac, so it’s normal for your Taurus partner to be at least a little dominating and controlling most of the time.

Once a Taurus man relaxes into a relationship, though, he trusts his partner enough to give her some of the power.

He will also be submissive to a woman he really loves because he will do anything to please her, even if it means battling his controlling instincts.

But when your Taurus man is about to break up with you, he will become more controlling than ever.

He won’t trust your judgment or decision-making skills anymore and he will try to micromanage everything you do.

You may feel like you can’t do anything to please him and like you’re never quite up to his standards.

When your Taurus man becomes so controlling and bossy that you can hardly stand to be around him, don’t think that trying to be perfect and following his directions will fix your relationship.

If you want to avoid a breakup and let him relax his controlling grip on you, you will need to get to the root of his issues with you and the relationship.

10 Important Things to Make a Taurus Man CommitWhat is The Best Match For a Taurus Man?
Hello, I'm Liz