How to Talk to a Scorpio Man 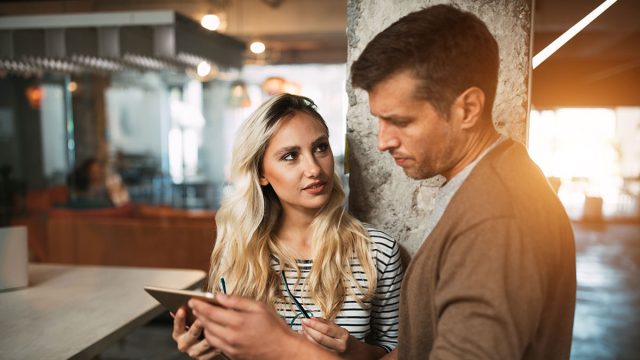 Talking with a Scorpio man might seem intimidating at first but it’s quite easy once you know what to do.

Many Scorpio men are social and love to chat with others. As long as you don’t push his boundaries, he’ll talk to you.

Honesty is very important to Scorpio men so when interacting with him, just be yourself! You don’t need to pretend to like things he likes.

He appreciates people who are funny, passionate, and upfront. If you like talking about a certain topic, go for it! He’ll love listening to you and seeing your passion.

Scorpio loves to hear about other people in general so don’t be afraid to talk about yourself.

He also likes it when people show an interest in him, so be sure to ask questions about him as well.

This is the most important thing to keep in mind if you want to know how to talk to a Scorpio man. He values honesty. He’s good at reading people so he’ll know if you’re lying to him.

Being honest isn’t just about not lying. Being honest means being genuine in everything that you say and do.

You don’t need to pretend to like something that he does to get him to like you. Find something else you can use to connect with him!

Scorpio doesn’t appreciate flattery either. If you’re going to compliment him, make sure it’s a sincere compliment. He’d rather you say nothing at all if you’re not being genuine.

Not everyone realizes it but Scorpio men are pretty funny. His sense of humor can be dry and sarcastic at times but once you get to know him, you’ll see how funny he is.

He appreciates people who are also funny. If your natural sense of humor isn’t dry like his, don’t worry! He appreciates all kinds of humor.

He’s not always a serious person and he doesn’t like it when the people around him are always serious either. Be funny. Be silly. Don’t be afraid of appearing foolish.

Let your natural sense of humor shine through. You don’t need to try too hard. He’ll appreciate the effort and if you’re having fun, he’ll have fun as well.

A Scorpio man’s texting style is humorous as well. Feel free to text him all kinds of jokes. He’ll enjoy talking to you more if you aren’t serious all the time.

Be bold and confident in everything that you say. If you have something to say to a Scorpio man, don’t be afraid to say it.

If a Scorpio man pushes a boundary or says something to upset you, let him know. He’d rather you say something because he doesn’t want to accidentally upset you.

When you say something, make sure you mean it. Don’t hesitate and don’t appear unsure. He likes when people speak with confidence.

If you like something that you’re talking about, don’t hold back! Scorpio men like it when the people they’re talking to are passionate.

If you’re really into a certain television series, talk about it all you want! If you love your job, feel free to talk about it.

When talking about something that makes you happy, you don’t need to hide that happiness. Scorpio men will appreciate seeing the emotion you have for things you care about.

If you’re flirting with him, let that passion shine through even more. Show him that you’re being serious and that you’re trying to pursue him, rather than just being silly and friendly.

If you’re looking for topics to discuss with a Scorpio man you’re getting to know, occult topics are always a safe bet.

Anything related to the occult is definitely what to say to a Scorpio man to get his attention. He loves all things supernatural and metaphysical.

If you don’t know that much about the occult, don’t worry. Just ask him if he believes in ghosts. Whether he does or not, he likely has a lot to say on the matter!

A Scorpio man who is really into the occult will likely be obvious about it. He might have tattoos related to an occult subject. He might wear clothes or carry books that signal his interests as well.

He’s not shy about discussing paranormal matters and he doesn’t shy away from discussions about death or macabre subjects.

You can also ask him about horror films. He probably likes at least a few, even if that’s not his favorite genre.

Innuendo is a great thing to use if you’re trying to learn how to flirt with a Scorpio man.

Scorpio men find innuendo both funny and alluring, depending on exactly what you say and how you say it.

Even if you’re not flirting with him, throw some innuendo into your discussion and he’ll find it amusing. He likes plays on words and he likes it when people make witty, sexual comments.

Feel free to be as suggestive as you’re comfortable with being. He’s not going to be offended. If you do say something that he doesn’t like, he’ll be the first to let you know.

Not all innuendo is sexual, of course. Even if you’re not comfortable with making sexual remarks, you can still use innuendo to make your banter wittier when you’re talking to a Scorpio man.

If you’re gossiping and don’t want somebody else to know what you’re saying, you can also make allusions to what you’re actually trying to say. Scorpio will easily pick up on what you really mean.

Scorpio men like to hear about other people. They’re used to hearing the life stories of strangers and they honestly don’t mind!

It will be easy to talk about yourself when you’re chatting with a Scorpio man. Something about Scorpios just makes people want to open up to them. They’re magnetic and charismatic. It’s easy to talk to them.

If he asks you specific questions about yourself, feel free to give in-depth answers if you’re comfortable doing so.

He’ll also enjoy hearing funny stories about things you’ve done. If you’re at a particular bar, for example, and you have a hilarious story about another time you were there, feel free to tell it.

Even if you don’t necessarily mean to, you may find yourself telling a Scorpio man everything there is to know about you. He just has that effect on people.

Don’t get too personal when you’re asking questions but feel free to ask away. It takes him a while to open up about more personal subjects. He’ll let you know if he doesn’t want to answer something.

He’s used to people telling him all about themselves. Something about a Scorpio man draws people in and makes them want to spill their secrets to him.

He enjoys this but he also enjoys it when somebody shows interest in him! Ask random questions or silly questions. They don’t have to be too serious or important.

If you want to know how to text a Scorpio man and you’re not sure how to initiate a conversation, just start by asking questions.

If you want to make a Scorpio man happy, have a deep, intense discussion with him about something he’s passionate about.

If you two aren’t that close, don’t try to pry into his personal life. He’ll talk about things he’s comfortable talking about.

When discussing certain topics, you don’t need to keep your talk on the surface level. When you’re discussing one of those occult subjects he likes, for example, tell him everything you know about it.

Remember, he likes to see passion! When you know a lot about a certain subject and can talk about it for hours, feel free to do just that. He’ll be willing to listen.

Are Scorpio men shy? Most of them are not. They just have clear boundaries and want those boundaries to be respected at all times.

A Scorpio man’s eye contact is intense and his eyes are the window to his soul. If you’re starting to push a boundary, you’ll be able to see it in his expression.

Take that as a warning and don’t keep pushing. If he has to tell you that you’ve crossed a line, you’ve definitely gone too far.

10 Signs a Scorpio Man is Using You
Hello, I'm Liz