How to Talk to a Cancer Man 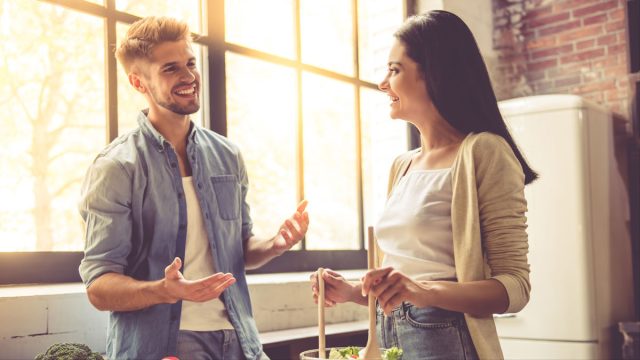 Talking with a Cancer man can be fun once you get him to open up. He might seem shy at first, so just be patient with him.

Try to talk to your Cancer man about things he might enjoy. Don’t make every conversation about yourself!

Patience is necessary when talking to a Cancer man. You need to be perceptive as well. He might not always want to chat, but he might not outright tell you that. Pay attention to him!

Try to connect emotionally when talking to your Cancer man. Be honest and open with him. Try talking about family or mutual friends, in addition to feelings.

Be compassionate and kind to your Cancer man. Compliment him and make sure you try to discuss things that you know he enjoys. That will make conversations more fun for him!

One of the most important things to keep in mind when learning how to talk to a Cancer man is that you need to be kind, caring, and compassionate.

Cancer men can be sensitive. If you’re not careful about what you say, you could hurt his feelings. Be mindful of what you say when chatting with him.

You should be compassionate toward other people as well. A Cancer man won’t write you off entirely if you’re judgemental or rude to others, but he will be wary of you.

Cancer men care about the people around them. They enjoy having friends and partners who are also caring and compassionate. If you want to get close to a Cancer man, show him your soft side when talking to him.

You don’t need to be perfect. Cancer men are patient and understanding. Just do your best to be kind.

Are Cancer men shy? Many of them are. If your Cancer man isn’t super chatty at first, don’t worry. He can take some time to open up.

A Cancer man might seem quiet and nervous when you first try to talk to him. This doesn’t necessarily mean that he’s not interested in talking to you! He might just be shy.

As long as he seems open to chatting, keep talking to him. Be patient with him, and he will open up as he becomes more comfortable with you.

Your Cancer man might not be available to chat when you approach him. That’s okay! Don’t push things. Just be patient and wait for a better time to talk.

If you’re messaging a Cancer man, be patient and wait for him to reply. He is typically good at responding, so he will get back to you when he can.

Being perceptive helps when you’re talking to a Cancer man. This will help you pick up on how he’s feeling and whether or not he’s genuinely interested in talking to you.

Try to pay attention when a Cancer man goes quiet. He’s a good listener, but you want to make sure you allow him to participate in the conversation.

Pay attention to how your Cancer man is acting. If he’s usually quiet, that might not mean anything. If he’s typically chatty and is being quiet, make a note of that.

Cancer men tend to be open books. If a Cancer man isn’t in the mood to talk, that will be obvious. If he’s just shy and is waiting for someone to approach him, that should also be obvious!

Being perceptive helps because it will allow you to avoid awkward conversations where a Cancer man isn’t really in the mood to chat.

Speaking with a Cancer man isn’t just about what you say. You need to pay attention to body language as well.

You want your body language to be open and calming. If you’re tense or you seem like you don’t want to be there, your Cancer man will be able to tell.

This is especially important if you don’t know your Cancer man well yet. You want him to be comfortable around you! Try to have relaxed body language, so he feels comfortable.

Pay attention to his body language as well. Again, Cancer men are open books in many ways. If a Cancer man is uncomfortable, you should be able to tell.

A shy Cancer man will likely still appear open and relaxed. If he seems closed off or tense, think before starting a conversation.

A Cancer man’s communication style is emotional. He is in touch with his emotions and is great at communicating feelings.

When talking to a Cancer man, try to connect with him emotionally. This is especially important if you want to befriend him or are interested in him romantically.

A Cancer man might enjoy a few intellectual conversations with you, but that’s not all he wants. If you want to connect with him, you need to be open to discussing feelings.

Ask your Cancer man how he’s feeling and show him that you genuinely mean it. Let him know that you’re open to listening if he seems like he’s in a bad mood and might need to talk about it.

Talk about your feelings as well. Don’t be afraid to get vulnerable and tell your Cancer man how you genuinely feel.

If you want to successfully communicate with a Cancer man, you need to be honest and sincere. He will be able to tell if you’re hiding something from him.

Cancer men are intuitive. They are terrible liars themselves, but they can pick up on it when other people lie to them.

A Cancer man might forgive you for lying if you apologize for it. However, if he knows that you constantly lie to him, he will never trust you.

What a Cancer man wants to hear is the truth. You don’t need to lie or exaggerate things about yourself to impress him. He wants to get to know the real you, not a character.

Speak from the heart when talking to a Cancer man. You don’t need to be strategic about the things you tell him. Don’t worry about trying to sound “smart.” Just be yourself! He’ll like you better that way.

Open Up To Him

If you regularly talk to a Cancer man, you should try to open up to him about yourself. This is also important if you want to get closer to him.

For the most part, Cancer men are trustworthy. If you tell a Cancer man something about your personal life, he’s not going to gossip about it to everyone he knows.

Conversations with a Cancer man will be more lively if you’re willing to talk about yourself. You don’t need to hide anything from him!

You don’t necessarily have to tell your entire life story the first time you meet a Cancer man. Just be willing to open up and show him who you are. Don’t be afraid to talk about your feelings, past, and other personal details.

You might not know a Cancer man’s likes and dislikes if you two just met. If you’re ever unsure of what to talk about, try asking him about his family.

Many Cancer men are family-oriented. Asking about siblings or parents is a good ice-breaker when chatting with a Cancer man.

Even if your Cancer man isn’t close with his family, he likely has a “chosen family” of close friends that he’ll be more than happy to talk about.

Holidays that usually involve spending time with family are good topics as well. Your Cancer man will happily tell you all about his family traditions and what he plans on doing for any upcoming holidays.

You can also talk about your family. This will help your Cancer man learn more about you, and he’ll appreciate you opening up to him.

What does a Cancer man like to talk about? One thing he enjoys chatting about is his friends. If you two have mutual friends, talk about them!

Cancer men care very deeply about their friends. If a friend recently got a promotion, had a baby, or experienced another significant life event, your Cancer man will gladly chat with you about that.

If you don’t know your Cancer man well yet, a good ice-breaker is asking him how he met your mutual friends. He might end up telling you some interesting stories!

Cancer men tend to be pretty humble, but they appreciate a nice compliment as much as anyone else!

If you want to make your Cancer man feel nice, compliment him while you two chat. Greet him with a compliment about his outfit, or compliment something that he shows you.

If you aren’t sure how to compliment a Cancer man, just focus on what you genuinely like about him. You don’t need to constantly flatter him, but you should try to make him feel good when you’re around.

How to Text a Cancer ManIs Sleeping With Cancer Man Too Soon Problematic?
Hello, I'm Liz