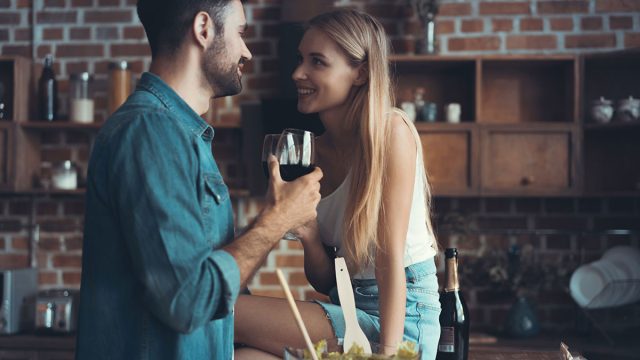 The signs a Pisces man likes you can be obvious. In order to catch his signals, you have to understand his unique personality.

When you can learn to think like a Pisces man, you’ll know the signs a Pisces man likes you.

Signs a Pisces man is falling in love are typical of traditional signs of attraction. He’s a romantic at heart and can barely hide his feelings when he likes you.

What do Pisces do when they like someone? A Pisces man will practically become your shadow. He’ll want to spend every moment with you.

Signs a Pisces man is playing you can include his tendency to only focus on sex and intimacy. A Pisces man can be bashful so he may act uninterested at first. This is not always a sign he is playing you.

If he’s quiet, shy and demure, he’s acting like a normal Pisces man. If he only interacts with you when he has a clear ulterior motive, like sex, then it’s a sign he may not be interested in you. A Pisces man not interested in you will usually stay at a distance.

But even a bashful Pisces man, when he likes you, will start to come around in time. You have to be patient with him. He can be slow to really open up even when he really likes you.

How does a Pisces man test you? Sometimes his quiet approach is a test in itself, though this is more a part of his authentic personality. Pisces men will show a slight interest and then hold back. He’ll wait to see how you respond.

A Pisces man’s flirting style can be romantic and subtle. He lets you take the lead. When a Pisces man likes you, he’ll show you by demonstrating that he trusts you. He does this in part by deferring to your authority.

A Pisces man who is letting you make all the decisions is showing you he likes you and wants to make you happy, just as he is also showing that he has faith in you. He’ll defer to you when it comes to making big choices.

A Pisces man may also let you set the pace of the relationship. This is another sign that he likes you. He will leave you in charge of taking the next moves. If you’re waiting for him to initiate, you may become stuck.

One of the signs a Pisces man doesn’t like you is when he acts cold toward you. Typically, a Pisces man who likes you will show affection. He’ll show you he cares by hugging you excessively.

You may even start to feel like he’s hanging on you or suffocating you with all the attention he pays to you. He’ll go out of his way to cuddle or put his arm around you. He’ll want to have frequent physical contact with you.

Though you may notice a Pisces man is affectionate with all his friends, a sign he actually likes you in a romantic way will involve the degree to which he shows affection. He’ll go out of his way to show affection in a more intense and focused way.

4. He Prioritizes Your Happiness

What are the signs a Pisces man likes you through text? He’ll make it a point to show you he cares about you. He’ll prioritize your happiness. A Pisces man who likes you will check in with you.

He’ll ask about how you’re feeling. If you’re having a bad day, he’ll do whatever he can to cheer you up. A Pisces man will go out of his way to make you happy. He’ll make sure you feel comfortable as well.

If he has been waiting months to see a new movie, but you want to spend date night at a concert because your favorite band is playing, he’ll miss opening night to make sure you get to see the concert. He’ll never complain either. It’s a worthy sacrifice to make you happy.

When a Pisces man really likes you, he’s easily manipulated. This is because he puts your desires and wishes before his own. He’ll even sidestep common sense in order to make you happy, giving up all his plans to do whatever you suggest.

Will a Pisces man forget you when you step back? If he’s really into you, he’ll obsess over you until he can see you again. A Pisces man flirts excessively and will act romantic and charming when he likes you.

When a Pisces man flirts with you, you can rest assured he likes you. He wouldn’t take the risk to show his flirty nature otherwise. Pisces men fear rejection and so they never want to open themselves up to such rejection unnecessarily.

When a Pisces man flirts with you, he’s testing the waters. He’s showing you he likes you in a noncommittal way. If he doesn’t feel confident that you’re interested in him as well, he will back down. He won’t chase you for too long.

Yet if you encourage his flirtatious behavior, a Pisces man will begin to open up even more. He’ll show you that he cares about you in other ways, making his intentions more obvious.

6. He Reveals His Inner World

When a Pisces man cares about you, he’ll reveal more about his inner world. He craves connection. When he likes you, a Pisces man will want to feel absolutely no separation between you and him.

This means he will want to invite you to share his fantasies, desires and unique inner landscape. He’s one of the deepest men you’ll ever meet. When a Pisces man likes you, he’ll want to reveal more of his deeper feelings and dreams.

To a Pisces man, this kind of connection is as important as sexual intimacy, if not more important. He will want to show you he likes you by letting you get a glimpse of what the world is like from his perspective.

A Pisces man will show greater vulnerability when he likes you. This is a good sign, even though at first it may just look like he’s an emotional mess. When he shows vulnerability, it means he trusts you.

It’s also a good sign that your Pisces love interest is willing to take greater risks to connect with you. He’s driven by emotions and can be highly sensitive. He tries to not be open if it means he may get hurt.

Yet when a Pisces man has reason to believe he can trust you and when he really likes you, he’ll wear his heart on his sleeve. You won’t have any doubt about his feelings for you. He may even tear up around you.

8. He Obsesses Over You

When a Pisces man likes you, he becomes obsessive. Even when you’re not with him, he can’t stop thinking of you. He’ll constantly check his texts and social media to see if there is a new message from you. Of course, you may not see this part of his obsession.

But what you will see from a Pisces man who likes you is that he’ll remember every detail of every conversation you’ve had. This is because he is actually obsessing over the time you spend together. He’s absorbing as much as he can about you.

Pisces men become obsessed when they like someone because they fully immerse themselves in your life. This means they feel as if their personalities merge with yours. This feeds their obsession with their romantic interest.

A Pisces man who likes you will be generous toward you. He’ll share everything he has and more. If he has enough food for himself, he’ll give you more than his portion. He’ll also share his time, energy, expertise and resources.

Pisces men are not usually good at budgeting. They have a hard time limiting themselves. A Pisces man who likes you won’t be able to turn you down, either. Even if he can’t afford it, he’ll constantly try to treat you and spoil you.

You can always tell when a Pisces man likes you. When you go out together, he’ll pay for everything. At a restaurant, he’ll insist on going all out and ordering drinks and desserts in addition to your meal.

A Pisces man is imaginative, creative and artistic. When he likes you, he will inspire you. He’ll try to be a positive influence in many areas of your life. He will encourage your dreams and stimulate your own creativity.

He may encourage you to take up dancing or to invest in your interests in art or music. He may inspire you to finally write the book you’ve been dreaming about or to make a major move that requires a leap of faith.

A Pisces man will lift your mood and bring out the best in you. When he likes you, he’ll go the extra mile to encourage you to pursue your dreams. All the aspirations that seem impractical are important to a Pisces man and he won’t let you give up on your lofty goals.

What Kind of Humor Do Pisces Men Enjoy?How do You Turn a Pisces Man On Sexually?
Hello, I'm Liz