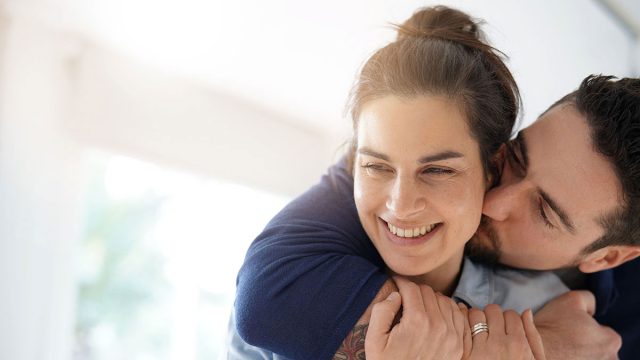 If you’re not sure how the Leo guy in your life feels about you, then you need to learn to recognize the signs a Leo man likes you.

A Leo man is quite gregarious and outgoing, and he can be a bit of a flirt. Unless he can’t stand you, he is unlikely to ignore you.

So, how can you tell if this sign is just being friendly or if he is interested in being more than friends with you?

By gaining a better understanding of his zodiac sign’s typical personality traits and behaviors, you will learn to spot the hints that a Leo man likes you.

1. He Pays Attention to You

The quintessential Leo man is social and outgoing, so he has no problem approaching strangers and making new friends.

He is rarely intentionally rude, so he will go out of his way to introduce himself to you and make polite conversation upon your first meeting.

Just because he notices you and starts to talk to you, it’s not necessarily one of the signs a Leo man has a crush on you. This is the normal, friendly behavior he does with everyone.

But when he focuses his attention on you and talks to you more than anyone else in the room, it means your Leo guy likes you a lot.

Don’t be heartbroken if he leaves your side to work the room and chat with everyone. It’s hard for him to stay focused on one person for too long, no matter how much he likes her.

But if he keeps coming back to you and spends more time with you than anyone else, it’s an indication that your Leo man has taken a special interest in you.

2. He Flirts With You

Besides being social and outgoing, a Leo man is also quite charming and flirtatious. He flirts with everyone, so it’s not necessarily one of the signs a Leo man is interested in you.

If you want to know whether or not he truly likes you, you have to pay attention to how a Leo guy flirts with you.

If he’s out at a bar with his friends, he might approach you with a cheesy pickup line because he’s trying to show off for his pals.

When he looks around to see who else is watching while he flirts with you, he doesn’t really mean his sweet and flattering words.

But if he buys you a drink, makes eye contact with you, and won’t leave your side, these are the flirtatious clues that show your Leo guy genuinely likes you.

3. He Tries to Impress You

Leo is perhaps the proudest sign of the entire zodiac, so a Leo guy loves to brag and show off.

If you’re wondering, “How does a Leo man behave when in love or when he has a crush on someone?” The answer is that he will do anything to impress the object of his affection.

A Leo man will show off in front of anyone, but if you get the sense that he is doing things specifically to impress you, it means he likes you.

For example, the typical Leo guy has no problem getting on stage at karaoke night to sing for a crowd because he loves the attention.

But if he chooses a song he knows you like or he sings while staring right at you, it means you’re the only one in the room he’s trying to impress.

If he pays for your drinks and boasts about the raise he got at work, he’s trying to show you that he can take care of you.

And if he brags to you about what a great boyfriend he is, it means he wants you to think of him as relationship material because he likes you.

4. He Is Protective of You

Leo is a fiercely loyal and protective zodiac sign, but he knows it’s impossible for him to help everyone. He only defends his loved ones from danger.

When he does things to protect and take care of you, it’s one of the signs a Leo man is falling in love with you.

He might offer you his coat when you shiver because he doesn’t want you to be cold, or he’ll insist on driving you home if it’s raining outside and you have to walk home.

He will also protect your reputation and emotions. If someone says something negative about you behind your back, he will stand up for you and make sure the unkind words never get back to you.

He doesn’t make these protective gestures for just anybody, so when he goes out of his way to take care of you, it means your Leo guy really likes you.

5. He Is Generous With You

Leo is a very big-hearted and magnanimous zodiac sign, so the typical Leo man’s love language is giving gifts.

He likes to spoil his loved ones with presents, and he spares no expense treating his friends and family to luxuries.

When a Leo man likes you, he will show you his generosity. He’ll pay for your ticket when you meet him at the movies or pick up the tab when you get drinks.

He might bring you thoughtful gifts and tokens of his affection to show how well he knows you and that he thinks of you when you’re not around.

But if a Leo guy asks you to split the bill and never pays your way, it means he doesn’t care about you very much.

Besides giving gifts, another one of a Leo man’s love languages is words of affirmation. A Leo guy generously doles out compliments because he also likes to receive them.

He can be a bit shallow and superficial, so appearances are important to him. A Leo man likes a pretty woman, so when he compliments your looks, it means he’s attracted to you.

And if he really likes you, he will compliment more than just your appearance. He will tell you how smart, adorable, charming, and hilarious he thinks you are.

Don’t take his flattery for granted or think he’s being insincere when your Leo guy compliments you. His praise means that he genuinely thinks the world of you and likes you a lot.

7. He Is Affectionate With You

Some zodiac signs are more physically demonstrative of their feelings than others, and Leo is a very physical star sign.

The typical Leo guy is quite affectionate and touchy-feely, so if he likes you, he will show it through touch. He isn’t shy, so he has no problem with public displays of affection.

When a Leo man hugs you, kisses you, and holds your hand in public, it means he likes you and can’t keep his hands off of you.

He is also a very possessive guy, so being affectionate in public is also a way of marking his territory.

What a Leo man looks for in a woman is someone who enjoys his affection and returns it. Show your Leo guy that you like him back by instigating kisses, touches, and cuddles, too.

Leo is a very jealous and possessive zodiac sign. He trusts his partner and he doesn’t try to control her, but he is suspicious of other men.

If you’re wondering, “How does a Leo man test a woman?” The answer is that he will grant her all the freedom she wants to see if she is truly loyal to him.

He won’t try to stop her from going out at night without him or talking to other men, but he will pay attention to make sure that no one else hits on her.

If a Leo guy is interested in you romantically, he will get jealous if you so much as mention another man’s name in his presence.

He will hate being compared unfavorably to other men, and he will possessively put his arm around you in front of other guys.

But if he encourages you to date someone else and has no problem with you talking about the guy you like, these are the signs a Leo man just wants to be friends.

9. He Makes You Feel Special

A Leo man is so social and flirtatious that he sometimes makes the mistake of leading women on and making them think that he’s more interested in them than he truly is.

But when a Leo guy really cares about you, you will know it because he does more than just talking and flirting.

He will go out of his way to make you feel special so that there’s no doubt in your mind how much he truly cares about you.

A Leo guy wears his heart on his sleeve, so he won’t hold back from showing and telling you how he feels.

He might lean over and whisper that you’re the prettiest girl in the room when you’re in a crowded place, or he’ll remember little things about you to show that he pays special attention to you.

When a Leo man uses his charms to make you feel like the only other person in the room, it means he likes you a lot.

How Do You Mentally Stimulate a Leo Man?How to Sexually Please a Leo Man
Hello, I'm Liz