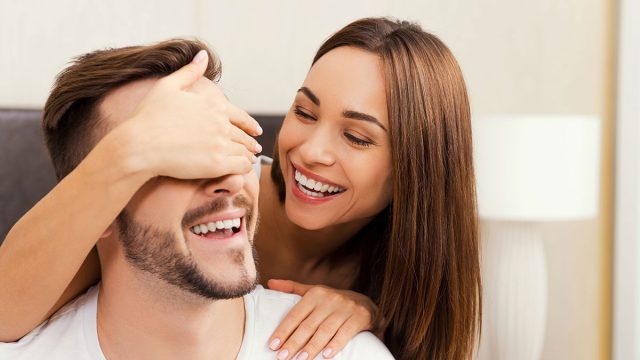 It can be hard to spot the signs that a Gemini likes you.

This is a man who loves to be around people. He loves to talk, and he loves to flirt. So how can you tell if he likes you?

While it is true that Gemini men are social creatures, they aren’t entirely open about themselves with other people. He’ll be more open with people he cares about.

Gemini men are highly independent, and they get bored doing the same thing all the time. So if he’s spending all his time with you, this is a good sign.

This is a man who won’t keep you around for long if he’s not interested. But, if he’s seeking you out and putting in the effort to spend time with you, he’s into you.

A Gemini man in love will pull out all the stops to romance his partner. He’ll go above and beyond what he would do for a friend or a casual fling.

He’s likely to do “stereotypical” romantic things with you. He’ll send you flowers out of the blue, bring you chocolate when you’re having a bad day, and do things like open doors for you and pull out your chair at restaurants.

He will also be very affectionate. He’ll play footsie under the table, hold your hand while walking down the street, and sneak little kisses any time he can.

His words will be just as sweet as the rest of him. He is likely to compliment you a lot, express gratitude toward you, and he may even get a little poetic if the mood is right.

This magic will make your Gemini man want a relationship with you.

Flowers and chocolate aren’t the only things you’ll be receiving if a Gemini man is attracted to you.

Gemini men are great at giving gifts to their friends and family, but if he likes you, you’ll be receiving gifts more often than anyone else.

And, of course, he won’t wait until your birthday to have an excuse to give you something.

These gifts will be thoughtful and creative. Gemini men often have various creative talents up their sleeves, and he might make some of the gifts he gives you himself.

He’ll remember if you mentioned liking a certain perfume, author, television show, etc. The gifts he gives will reflect the things he’s learned about your preferences.

Not all the gifts will be extravagant. The key here is the frequency of the gift-giving. If a Gemini man is not interested in you romantically, it’s unlikely you’ll be getting frequent gifts from him.

Gemini men are highly independent people. So if he’s talking to you all day long, that’s a good sign he’s interested in you.

This may be overwhelming if you’re more shy or introverted. Try and take the constant contact for what it is, though: a sign that he likes you.

Look for signs a Gemini likes you through text. He often texts his friends all day as well, but the content of the texts will be different. If he is texting you about more personal matters, he likely has feelings for you.

Gemini is up for anything. Him taking your extra concert ticket one time doesn’t mean he’s in love with you. However, if he’s always tagging along with you, he just might be.

This is especially true for those less exciting events. So, for example, if he comes with you to your stuffy office holiday party, he’s going for you, not the exciting atmosphere.

If he’s not a fan of kids, but he comes to your sister’s baby shower or your cousin’s 4th birthday party, he’s going just because you’ll be there.

If he’s always willing to drop everything for you, he likes you. This is especially true if he’s going places or events he wouldn’t usually enjoy going to.

This one by itself doesn’t mean a Gemini man is in love with you. How he flirts with you can tell you if he’s just having fun or if he’s more serious about it, though.

A Gemini’s stare can be intense if he likes you. On the other hand, if he’s avoiding eye contact while flirting or if his gaze is light and relaxed, that might be a sign he’s just having fun with you.

On the other hand, if he’s holding eye contact and staring intensely into your eyes, that may be a sign he’s into you.

Pay attention to what he says while he’s flirting as well. He’ll start pulling out the witty banter if he wants you to stick around for a while.

If the two of you can have a long, flirty conversation that is holding his interest, that will endear you to him.

Is your Gemini man painfully distant? Rekindle your love.

If you want to know how to tell if a Gemini man is interested in you, pay attention to how willing he is to talk about his feelings when you’re around.

Air signs like Gemini don’t often wear their hearts on their sleeves. But, if he’s opening up to you and talking about how he feels, he probably likes you.

Gemini wants to come across as fun. They want to be the life of the party. It can be difficult for them to show others that they aren’t always happy and carefree.

If he’s sharing his insecurities or opening up to you when he’s sad, he likely has deep feelings for you.

This is a man who will also take a risk and outright tell you he likes you.

He might do it in a casual or joking way (so there is plausible deniability if you reject him), but if he says he has a crush on you, it’s likely the truth.

Again, a Gemini man’s gaze can be strong and intense. So pay attention to how he looks at you even when he’s not flirting.

If the two of you are in a crowded room or together with a group of friends and he’s constantly looking over at you, that’s a good sign he’s interested.

If he’s looking at you more often than he looks at others, that’s a good sign. He might act more aloof than he really is, but he’s not going to be able to resist looking at you.

You’ll be able to tell if a Gemini man is playing you just by his eyes as well. If he’s looking away while talking to you (especially if he’s looking at someone else), he’s probably not that into you.

You’ll be able to tell if a Gemini man misses you because he’ll ask your mutual friends about your whereabouts.

He won’t just be going around behind your back asking everyone for information on you, though. He’ll also check in with you often.

If you’ve been quieter than usual, he’ll message asking if you’re feeling okay. If he knows you’ve been sick or stressed, he’ll ask if there’s anything he can do to help.

He will ask you all kinds of questions about yourself as well. For example, what’s your favorite color? Where did you grow up? What did you major in? If you could go anywhere in the universe right now, where would you go?

It may seem like you’re just playing 20 questions, but he really does want to get to know you. As your relationship develops, he may start asking more personal questions as well.

If a Gemini is interested in you, he’s going to show it with his whole body.

This means that he’ll do things like lean in close to you when you’re talking. He wants to make sure he’s capturing every single word you say.

He might touch you casually on the arm while flirting or even just to be friendly, but his touch will linger if he has feelings for you.

He might keep a hand on your thigh the whole time you two are chatting. If you two are watching a movie, he’ll wrap an arm around your shoulders and keep it there.

How does a Gemini man express love? One way is by having deep, meaningful conversations.

Gemini will talk to anyone about various topics, but he only has personal conversations with people he’s close with.

Even some of his friends don’t know all of the inner workings of a Gemini man. Considering how social and out there he is, he can also be a highly private person regarding his feelings.

If he starts having a serious conversation about his childhood, appreciate it for the gift it is and make sure you listen to him. He doesn’t share highly personal details about himself with just anyone.

He’ll be more willing to show you his true thoughts on specific issues if he likes you as well.

If he’s a people-pleaser, he may avoid certain topics or not reveal his true thoughts on them. With you, he’ll be completely open and honest.

10 Tips to Make a Gemini Man Obsessed with YouWhat to Expect Sexually From a Gemini Man?
Hello, I'm Liz