10 Signs a Cancer Man Cares About You 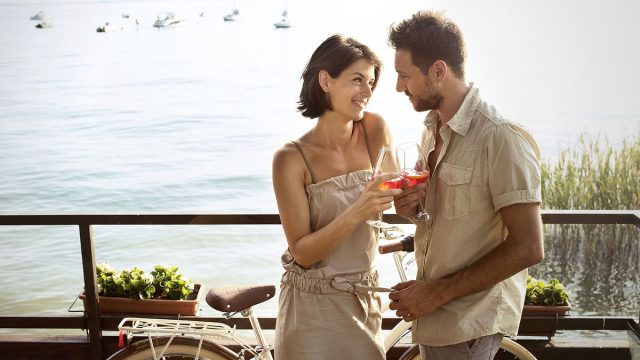 If you’re not sure whether or not he likes you, you might be looking for the signs a Cancer man cares about you.

Cancers are naturally shy and enigmatic, so it can be hard to tell how much they care.

They are also very friendly and kind to almost everybody that they meet, so you may not know if he really likes you or is just being as nice to you as he is to everyone else.

But there are certain signs you can look for which indicate that a Cancer man is going above and beyond for you.

By looking at the personality characteristics and typical behaviors of his sign, you can learn to read your Cancer man and decipher how much he cares.

1. He Touches You in Public

Touch is one of the love languages for those born under the sign of Cancer and they are quite physically affectionate with the people they hold dear.

When a Cancer man has a crush on you, he will find any excuse to touch or be close to you. He’s not sexually aggressive, but he will touch your arm or give you a hug to show he cares.

Even if his interest in you is only friendly, if he touches you it means that you are somebody special to him.

A Cancer man doesn’t go around touching just anybody; he saves physical affection for the people he really likes.

If he sits close to you, puts his arm around you, or finds any way to make contact, it’s one of the physical signs a Cancer man likes you.

Besides touch, another one of the Cancer love languages is acts of service. When a Cancer man cares about people, he enjoys helping them and making their lives easier.

Each sign of the zodiac is connected to a particular body part, and one of the body parts for Cancer is the stomach. Cancers adore when other people prepare food for them and they enjoy cooking for their loved ones.

A Cancer man is happy to spend hours in the kitchen making a big meal for his friends and family to share.

But if he’s not cooking elaborate meals for you, don’t take it as one of the signs a Cancer man doesn’t like you.

Not every Cancer guy is a fantastic cook, but he will find other ways to nourish you if he cares about you.

He’ll pick up your favorite takeout, bring you breakfast in bed, or warm some canned soup in the microwave for you when you’re sick.

3. He Spends Time with You

Cancers enjoy spending so much time with their loved ones that they could be accused of being codependent.

When a Cancer man likes someone, he wants to be around that person as much as possible. If he loves you, he will choose to spend time with you over anyone else.

To a Cancer man, any activity is improved by having his loved ones by his side. He would rather work out, run errands, or watch television on the couch with his partner or friends than do it alone.

But if a Cancer guy dodges your invitations to hang out or always seems too busy to spend time with you, it means you’re not a priority to him.

Cancers are highly sensitive and they love to talk about their emotions. When they care about people, Cancers try to get them to open up about their feelings, too.

You don’t have to be afraid of telling a Cancer man how you feel. He is an empathetic listener and won’t judge you for sharing your beliefs.

He is compassionate and would love to help everyone work through their feelings, but he only has the emotional bandwidth for so many people.

When he checks in on you and asks how you’re doing, he’s not just making small talk. One of the signs a Cancer man cares about you is that he pays attention to your emotional state.

5. He Puts You First

When a Cancer man cares about somebody, there’s nothing he won’t do for that person. He is a great friend, partner, and family member because he goes above and beyond for his loved ones.

But a Cancer man’s generosity doesn’t always work in his favor. Because he is so earnest and giving, sometimes people take advantage of his sweet nature.

He will spend all his time, money, and energy to help the people he loves. When he cares about you, he will give you the shirt off of his back, even if it means he will freeze.

If he puts your wants and needs first, even before his own, it’s one of the sure signs a Cancer man has feelings for you.

6. He Introduces You to His Family

A Cancer man holds his family close to his heart. He has a special relationship with his mother, and it’s important to him that his partner and even his friends get along with his relatives.

One of the signs a Cancer man is serious about you is when he introduces you to his family. He is very protective and won’t let just anyone meet them.

He wants to make sure you fit in with his clan and he believes that his family will love you just as much as he does.

Inviting you to meet his family shows that he cares deeply about you and expects you to be in his life forever. If you’re meeting his relatives, it means that in his mind, you’re already one of the family.

7. He Introduces You to His Friends

A Cancer man’s friends are like a second family to him, and he is just as protective of his buddies as he is of his relatives.

Most Cancers surround themselves with a trusted group of close friends that they have had for a long time.

If he introduces you to his friends, it’s a sign that he considers you one of them. Once you have made it into his close circle, there’s not much you could do to make him stop caring about you.

8. He Spends Money on You

Cancers are good at saving money and they don’t like to spend frivolously on themselves.

Although they appreciate nice things, they are hard workers and would rather sock their money away for the future than blow it on luxury items.

But a Cancer man enjoys spoiling his loved ones, so spending his hard-earned cash on other people isn’t as difficult for him as spending on himself.

If he buys you that expensive handbag you’ve been lusting after every time you walk by the store window for ages, it’s one of the sure signs a Cancer man likes you more than a friend.

But a Cancer man doesn’t have to be in love with you to spoil you. Cancers are known to lavish thoughtful gifts on their friends and family, as well.

Don’t feel guilty if a Cancer man enjoys spending on you because he is getting something out of it, too. He is a generous guy and giving makes him happy.

Just make sure to show your gratitude and let him know that you appreciate his generosity. He could become resentful if he feels like you take him for granted or don’t notice his efforts.

Cancer is symbolized by the crab, which is the perfect mascot for this protective zodiac sign.

Crabs are known to shield their babies and friends from predators by covering them with their hard shells. Just as a crab defends its dear ones, so a Cancer man protects the people he loves the most.

One of the signs a Cancer man loves you is when he becomes protective. If you’re leaving his place and it’s storming outside, he may insist on driving you home or demand that you text him the minute you arrive.

His concern might even come across as overbearing at times, but know that he’s just trying to take care of you and make sure you are safe.

When a Cancer man loves a woman, there is nothing he won’t do for her. He likes to be needed and doesn’t mind when his loved one depends on him.

If he likes you, he will want to show you that you can rely on him. He answers the phone when you call, he keeps his promises, and he’s always there to help if you ask him.

On the other hand, if a Cancer guy doesn’t like you, he will ignore your text messages, never make plans with you, and won’t offer to help you when you’re struggling.

One of the ways a Cancer man demonstrates his love is by showing up for the people who matter to him.

If you are confident that you can count on him to be there when you need him, then it’s a good sign that your Cancer guy cares for you.