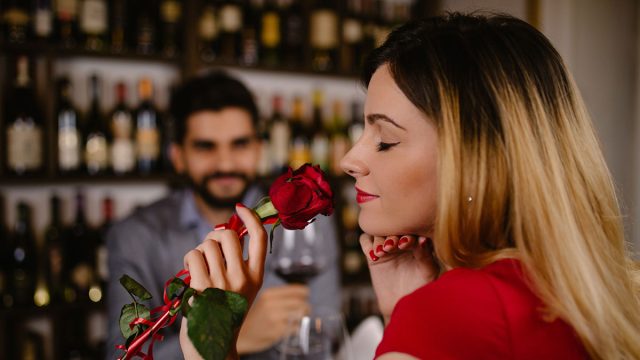 The signs an Aquarius man secretly likes you are obvious if you know what to look for! He thinks he’s being sneaky sometimes, but he’s not.

Your Aquarius man might try to hide his feelings, but he won’t be able to for very long.

Aquarius men are good at hiding their emotions. They are emotionally detached in many ways, even if they are also incredibly social and friendly.

Your Aquarius man will spend a lot more time with you than he does with others when he’s interested. He’ll reach out more, ask your opinion on things, and generally show interest in you, even if he keeps it friendly.

Once you know what you’re looking for, your Aquarius man’s feelings will be obvious! He won’t be able to hide them from you, at least not forever.

1. He Tries To Impress You

When an Aquarius man is attracted to you and wants to keep you around, he’ll do anything to impress you.

Your Aquarius man will tell you about every success he’s ever had if he’s trying to impress you. He’ll show off pictures of things he’s created, namedrop, or mentioned events he’s participated in.

When your Aquarius man likes you, he also wants you to like him! He’ll do anything to portray himself positively and give you a good impression of him.

He won’t lie, but he might exaggerate a bit. It’s harmless, though. He is just trying to get your attention. Give him the attention he wants, and start getting to know him better!

2. He Asks About You

One of the signs an Aquarius man is into you is that he’ll ask other people about you. He’ll do what he can to learn more about you, even when you’re not around.

Your Aquarius man might bring you up in conversations with others when he likes you. He won’t be able to help himself! Talking about you will make him happy.

When an Aquarius man likes you, he’ll also check in with you often. He’ll message just to ask how your day is going. If you haven’t messaged him in a while, he might send a text to make sure you’re okay.

You might not always notice this one, especially if you two don’t share mutual friends. If you ever catch him talking about you at a party or hear from a friend he’s asked about you, then your Aquarius man likes you.

If an Aquarius man opens up to you, that’s a sign he trusts you and cares about you. He’s not the type to get vulnerable or talk about emotions with just anyone!

An Aquarius man will show you a side of him that nobody else ever sees when he likes you. He’ll be more emotional than usual and talk about topics he normally avoids.

One of the signs an Aquarius man likes you through text is that he’ll text you about more emotional topics. It might be difficult to open up in person, but he’ll have an easier time opening up via text.

It’s a huge deal if an Aquarius man is genuinely vulnerable with you. If he’s honest about his sadness, anger, or fear, that’s a sign that he cares about you.

He doesn’t wear his heart on his sleeve. Aquarius men tend to be emotionally detached and hide how they feel if they don’t want others to know. If he’s entirely open with you, then he likes you.

Many relationships with Aquarius men start as friendships. If you are your Aquarius man’s closest friend and he trusts you more than anyone else, he might also secretly like you.

If you and your Aquarius man haven’t been friends that long, and he says you’re his best friend, that’s also a sign he likes you! It might be easier for him to confess that he values your friendship first before he confesses any romantic feelings.

If an Aquarius man likes you as more than a friend, he’ll still want to maintain and strengthen your friendship. Sometimes, he doesn’t tell you his feelings right away because he doesn’t want to ruin the friendship.

An Aquarius man who likes you won’t want to stop being friends if you two get together. Friendship is incredibly important to Aquarius men, and they really do want to date their best friend.

5. He Spends A Lot of Time With You

Being with you will make him happy when an Aquarius man likes you. He’ll love spending time with you whenever he can or just chatting with you via text message if you can’t physically be together.

An Aquarius man won’t spend time with you if he doesn’t want to. Even if you work together and he has to, he won’t do it more than necessary if he doesn’t enjoy being around you.

When an Aquarius man goes out of his way to make plans with you, that’s a sign he likes you. He wants to spend time with you, and he will put in the effort necessary to do so!

Aquarius men are social people, but they aren’t polite for the sake of being polite. If an Aquarius man asks you questions about yourself, he wants to get to know you better!

When an Aquarius constantly asks you questions about yourself or attentively listens while you talk, that’s a sign that he likes you. He wants to get to know as much about you as possible!

Your Aquarius man will try to get to know you in many ways. You might find him scrolling through your old social media posts or checking out music you’ve mentioned you like.

An Aquarius man who likes you will want to know everything about you. He’ll remember everything he learns as well!

Getting to know you will make your Aquarius man happy. He may end up falling in love with you as he gets to know you better, and eventually, liking you will stop being a secret.

7. He Asks Your Opinion

Some Aquarius men think their opinions are best. They might listen to the opinions of others, and they can be incredibly open-minded, but they won’t necessarily ask for someone else’s opinion before they do something.

If your Aquarius man starts asking for your opinion about his clothing, he likes you! He’s trying to see what you like best on him so he can look good for you.

Your Aquarius man may also ask your opinion on music, television shows, books, movies, etc. He’s doing this because he values your opinion and trusts you to recommend good things to him!

One of the signs that an Aquarius man is not into you is that he won’t care about your opinion. He won’t ask for it and will ignore what you say even if you make a valid point.

When he likes you, your Aquarius man will always be happy to hear your opinion about something, whether he’s specifically asked or not.

8. He Tells His Secrets

The social nature of Aquarius means that some people are surprised they can be so secretive. Aquarius might talk a lot and openly interact with people, but that doesn’t mean an Aquarius man will tell everyone his secrets!

If you know more about your Aquarius man than anyone else, that’s a sign he might have feelings for you. He doesn’t tell just anyone his deepest, darkest secrets.

When your Aquarius man likes you, he might start telling you more about himself to see how you react. He may be figuring out if he can trust you or trying to see if you’ll judge him.

If you react well, he’ll likely keep telling you secrets. This is his way of showing you that he trusts you and wants you to know him better.

When an Aquarius man tells you his secrets, be sure you keep them! They are for your ears only. Respect him and appreciate the gift he is giving you.

An Aquarius man in love won’t always be able to hide it, even when he tries. If your Aquarius man secretly likes you, you’ll be able to tell because he’ll be more affectionate with you than he is with others.

An Aquarius man’s body language can reveal how he feels about you. Aquarius men aren’t always physically affectionate. If he is with you, he might like you.

If your Aquarius man is physically affectionate with you in public, he definitely likes you. He’s making sure that everyone can see it as well! He won’t hold hands with just anyone, and he doesn’t hug everyone as a greeting.

When an Aquarius man touches you or stands close to you, he’s showing how much he cares. It might be subconscious, or he might be doing it on purpose, but pay attention either way!