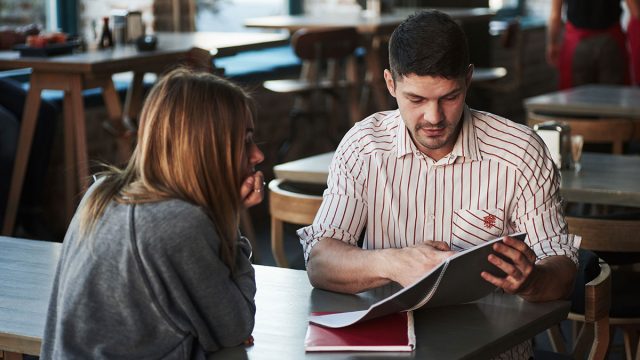 A shy Capricorn man is not hard to come by. Some Capricorn men are confident and more social than others, but many are shy and introverted.

Even if a Capricorn man isn’t shy, he might still seem reserved or aloof. Capricorn men just take time to open up.

A shy Capricorn man might take even more time to open up than usual. Capricorn men often seem shy because of their private nature. Many are also distrustful and may take time to warm up to others.

Some Capricorn men are shy in specific circumstances, such as when talking to a crush. Even a Capricorn man who isn’t shy might suddenly become nervous around his crush.

Are Capricorn men shy? Some are! Others aren’t necessarily shy, but many of their characteristics can make them seem shy or standoffish.

A Capricorn man’s personality tends to be reserved and aloof. Capricorn men are not that loud or extroverted, and many keep to themselves.

It’s easy to assume that someone is why just because they are quiet, but that isn’t always the case! Plenty of Capricorn men aren’t shy. They’re just aloof.

Sometimes, a Capricorn man is just genuinely a quiet person. He might not feel shy around other people, but that doesn’t mean he’ll be loud or super talkative.

If a Capricorn man is shy, he’ll have difficulty getting out of his comfort zone. It might be challenging for him to speak up at work or talk to people at events.

If a Capricorn man is just reserved and aloof, he’ll have no issue speaking up when he needs to. He just won’t draw attention to himself.

A Capricorn man’s communication style tends to be direct and concise. Many Capricorn men are not super chatty, especially around strangers.

Capricorn men don’t always go out of their way to chat with others, especially strangers. They don’t like engaging in small talk and usually only initiate a conversation when they legitimately have something to talk about.

A Capricorn man being quiet or not wanting to talk doesn’t always mean he’s shy! He might be, but Capricorn men who aren’t shy may also just not want to speak much sometimes.

If a Capricorn man is shy, he may have difficulty speaking to anyone, even when he wants to. He might have trouble talking to coworkers, even when he needs to for work.

A Capricorn man who isn’t shy will have no trouble approaching people when he wants to talk. He just won’t be super chatty if he genuinely doesn’t want to talk to someone.

Being introverted is a typical Capricorn man characteristic. Even a Capricorn man who isn’t shy will need time away from other people to recharge.

Capricorn men recharge by being alone. If they feel tired and worn out, socializing will make them feel even more tired.

A Capricorn man might need a break if he doesn’t want to socialize. He may need to spend time reading a book or relaxing instead of being around other people.

A shy Capricorn man might have difficulty interacting with people even when fully “charged.” He might not know how to socialize even when he wants to.

A Capricorn man who is just introverted but not shy will have no issue socializing when he’s up to it.

If you see a Capricorn man sitting by himself at a party, he might be shy. He might also just need some time alone. He might be enjoying people-watching or just taking a break before he starts socializing again.

Many Capricorn men don’t need to be around other people. They are happy to be alone, even if they aren’t shy. They might just prefer their own company sometimes.

He’s Slow To Open Up

In the early stages of dating a Capricorn man, he might seem shy. He’ll take a while to open up, even if he does want to connect with you.

Capricorn men aren’t the type to tell their whole life stories the first time they meet someone. They keep their thoughts and feelings close to their chest, and they take a long time to trust someone enough to open up.

Even an outgoing Capricorn man won’t tell you everything about himself. He might have long, engaging discussions with you about specific topics, but he’ll avoid discussing his personal life too much.

A shy Capricorn man might be especially slow to open up because it will be challenging even when he wants to. He’ll need some extra time to feel comfortable enough around you.

A Capricorn man who isn’t shy will open up as soon as he’s ready. If he’s not opening up, he doesn’t want to.

Some Capricorn men are incredibly private. They don’t like to reveal personal details about themselves to coworkers, casual acquaintances, or even some of their friends.

If your Capricorn partner never wants to engage in public displays of affection, it might be because he’s shy. He may also just be private or think that PDA isn’t appropriate.

Capricorn men do not wear their hearts on their sleeves and don’t let everyone around them get to know them. They only reveal specific details about themselves to the people they trust most.

Does this mean that Capricorn men are shy? Not necessarily. A Capricorn man might be happy to talk to you about work or a shared interest. He may be confident, love being around people, and still be a private person.

A shy Capricorn man might start to talk more about himself as he gets to know you better. He may feel more comfortable discussing personal details as he talks to you more.

He Can Be Cold

A Capricorn man’s body language sometimes seems cold and closed off. He might seem shy because of this, even if there’s another reason for his behavior.

Capricorn men aren’t always the warmest or most inviting people. They are emotionally distant and tend to keep to themselves even if they don’t have any issues interacting with other people.

A Capricorn man might be happy to socialize with you, but he may seem distant or bored the whole time. That is just because of his cold demeanor most of the time.

People mistake Capricorn men for being shy because they are distant, and some are intimidated by them. As a Capricorn man gets to know you, you might find that he becomes less cold and less shy.

Some of a Capricorn man’s behavior makes more sense when you know that Capricorn men tend to be distrustful.

A Capricorn man might avoid people or keep quiet because he’s shy, but he may also not trust the people around him. If he’s surrounded by strangers, he might avoid them because he’s not sure he can trust them.

A Capricorn man isn’t going to have an open discussion with you if he doesn’t trust you. If he’s suspicious about your intentions when you approach him, he might seem more closed-off than usual.

Many Capricorn men have a difficult time trusting other people. Even if they are confident in their ability to socialize and have no issue talking to people, they may still hold back.

Of course, some Capricorn men are shy and distrustful. Because of this, they will have a challenging time forming connections with people.

Can Be Shy Around Crushes

When a Capricorn man is secretly in love, he might be particularly shy around the object of his affection.

Even a confident Capricorn man might act shy around his crush! If he secretly likes someone, he may feel nervous or tongue-tied around them.

If a Capricorn man is shy around everyone, that might be his personality. If he is only shy around a specific person, that’s a sign he might have feelings for them.

If you think he might be shy because he has a crush on you, pay attention to the body language of a Capricorn man when he’s with you compared to others. He’ll be more bashful or anxious around you but may seem confident with others.

A Capricorn man might act uncharacteristically shy if he’s hiding his feelings for someone. Your Capricorn friend might suddenly seem shy around you when he wasn’t before.

You may also notice that he is well-spoken around others but has difficulty getting words out around you.