10 Signs an Aquarius Man is Serious About You 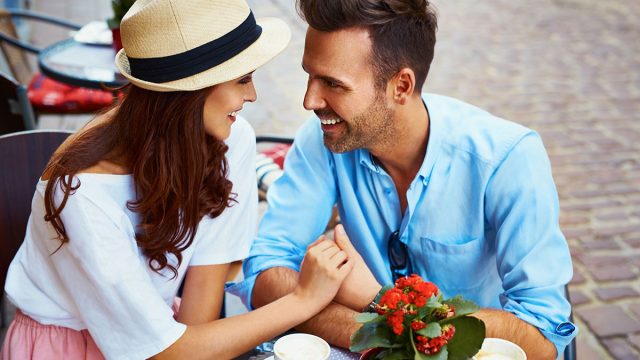 If your casual, goofy guy is turning into a serious Aquarius man, you might be wondering if your relationship is getting real.

Because Aquarians are naturally aloof, it’s difficult to read the signs an Aquarius man is falling for you.

For an Aquarius man, expressing feelings doesn’t come easily. He has a hard time recognizing his emotions and communicating them properly.

There are many signs to look out for if you want to know whether or not your Aquarius guy is serious about you and wants to have a committed relationship.

Knowing more about the typical Aquarius personality traits can help you read the signs of an Aquarius man in love.

1. He Wants to Be Your Best Friend and Your Lover

For an Aquarius, being in a relationship isn’t all about romance, although they certainly have their romantic moments.

If you want an Aquarius man to take you seriously, you must have a solid foundation of friendship along with your romantic connection.

An Aquarius wants his partner to be his best friend and his lover. He wants someone he can laugh and play with as you journey through life together.

To him, the bond of friendship is just as important as sexual or romantic feelings. He knows that looks and lust fade, and the genuine connection between you is what will last forever.

If you want him to take you seriously, get to know him as a friend first, or make sure that you fulfill that best friend role within the relationship.

2. He Puts You First

Aquarians are not exactly selfish, but unless he is serious about you, he will take care of his own needs first. It’s not that he doesn’t care, it’s just that he is used to being independent.

But an Aquarius man in love puts his partner first, even before himself. When he’s serious about you he won’t hesitate to give you the shirt off of his back, and his gloves and hat, too.

When you notice that your Aquarius guy sacrifices his own comfort or needs for you, it’s a sure sign that he really cares about you and takes the relationship seriously.

He will also prioritize you over his friends and family, who are very important to him. It’s a good sign when an Aquarius takes your side or would rather spend time with you than anyone else.

An Aquarius man wants his partner to be happy, even when it means giving up his own happiness. When he loves you, he puts you before anyone else, including himself.

3. He Makes a Grand Gesture

Aquarians dream big, and they usually communicate better through actions instead of words. It makes sense that an Aquarius in a serious relationship knows how to make a grand romantic gesture.

When an Aquarius man is serious about you, he will pull out all the stops to show you he cares. He might prepare a candlelit dinner, book a couple’s massage, or plan a surprise weekend getaway.

Don’t be surprised if your Aquarius guy makes a big move to sweep you off your feet. He enjoys doing it, and it’s his way of showing how important you are to him.

But he’s not the kind of guy who makes grand romantic gestures for just anyone. He knows how to be romantic, but it’s not his way of winning people over or impressing them.

An Aquarius will only make a big romantic gesture when he’s really into you. If he treats you to a huge display of his love, it means he’s serious about you and thinks the relationship will last a long time.

4. His Future Plans Include You

Aquarians are symbolized by the water bearer, so it makes sense that they go with the flow rather than making rigid plans for the future. When they do make plans, they usually only plan for themselves.

If you’re wondering how to know if an Aquarius man is serious about you, you can bet that he is when he starts including you in his future plans.

When your Aquarius guy starts talking about marriage, children, or growing old together, it means he is completely smitten. It’s even a big deal for him to talk about your next date or make plans for next week.

It’s very unlike an Aquarius to think too far ahead, and because he is so independent he rarely plans around someone else. But when he’s serious about you, he will talk about a future together.

5. He Introduces You to His Family

Family is very important to an Aquarius, but he won’t introduce his family to every person he dates. If an Aquarius invites you to meet his family, know that it’s a special occasion for him.

When he introduces you to his family, he wants to make sure you blend in with them and that they approve of the relationship. It also proves that he is proud of you and wants to show you off.

If an Aquarius guy asks you to meet his family, it shows he’s serious about you and thinks of you as someone he can see spending a lot of time with his relatives, or even starting your own family together.

6. He Wants to Meet Your Family and Friends

If he is serious about you, he will express interest in meeting your family and friends because to him, it helps solidify the relationship.

He’s also curious and wants to learn more about where you came from and who you associate with. He knows that one of the best ways to get to know you better is by spending time with your tribe.

If you’re wondering how to know if an Aquarius man doesn’t like you, one sure sign is if he resists meeting your friends. If he doesn’t care to know your crew, it means he doesn’t care enough about you.

7. He Opens Up About His Feelings

Aquarians tend to have their heads in the clouds, and they usually aren’t very in touch with their emotions. They don’t like to be too vulnerable or share their feelings with just anyone.

Aquarians often come across as cold and aloof, and even when they like somebody they are guarded and use humor to deflect from talking about emotions.

If an Aquarius opens up to you about his feelings, it means he is truly comfortable with you and wants you to know him on a deeper level.

It can take a long time to open up and when he does he may seem stilted or uncomfortable, but it’s only because he opens up to few people and doesn’t have much practice sharing his heavy feelings.

This weird thing makes Aquarius men lose interest... Here's how to make them stay in love.

8. You Can Depend on Him

An Aquarius man values independence over nearly everything, and it takes a lot for him to give up his freedom. He wants a partner who is just as independent as he is.

If you’re clingy or demanding, it will scare an Aquarius off quickly. He doesn’t want anyone to rely on him and he finds codependence quite unattractive.

Don’t be surprised if while you’re first getting to know him an Aquarius disappears and comes back. Aquarians aren’t known for their consistency, and may dip in and out of your life until he is serious about you.

But when he is serious about you, an Aquarius will show you that you can depend on him. Although he might be flaky with others, for you, he will show up on time and be there when you need him.

If you still can’t count on your Aquarius guy even after seeing each other for a while, it might be time to let him go. Remaining unreliable is one of the signs that an Aquarius man is not into you.

9. He is Vulnerable with You

Because they are so independent, an Aquarius is uncomfortable trusting anyone with his heart. It takes a long time for him to be vulnerable with another person.

Even when he has strong feelings for you, it can be hard for him to say it because he’s so scared of rejection or a broken heart.

When an Aquarius man says he loves you, he isn’t just telling you what you want to hear. He really means it, and it takes a lot for him to let his guard down enough to say it.

An Aquarius knows that being in love makes him vulnerable, so for him to share his true feelings means he is head over heels for you and trusts you not to hurt him.

10. He is Warm and Affectionate

Aquarians can be quite standoffish, and they aren’t known for being particularly touchy-feely. They usually don’t like public displays of affection or too much cuddling.

But when an Aquarius man has a crush on you and it’s getting serious, he will show you his warm and affectionate side.

When he kisses you in public, holds your hand, or snuggles up next to you on the couch, it means his feelings for you have deepened.

If you crave physical touch and need it to feel loved, be patient with your Aquarius man. Although he won’t demonstrate his feelings at first, once he’s comfortable enough with you he will give you all the affection you need.

How Do You Mentally Stimulate an Aquarius Man?Do Virgo Men Cheat More Than Others?
Hello, I'm Liz