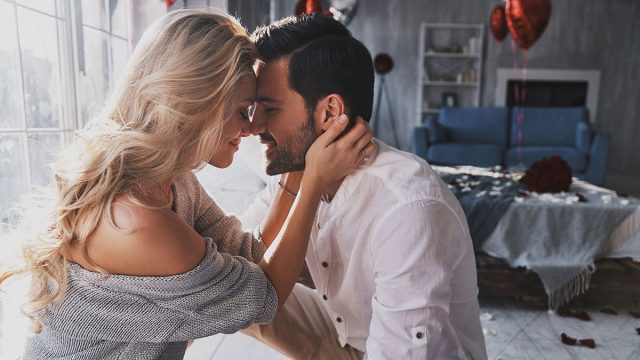 A selfish Scorpio man is often selfish because he thinks he has to be. In his efforts to protect himself, he doesn’t think about the feelings of others.

Scorpio men aren’t always selfish but when they are, it’s quite intense.

Scorpio men are perfectly capable of being loving, devoted, and selfless. They will gladly give their loved ones anything they might need. They will do anything for them.

However, Scorpio men have another side. When he’s jealous, he acts out. When he feels hurt, he won’t think about the feelings of others in his quest to make himself feel better.

Scorpio men seem inconsistent sometimes because they have a very all-or-nothing view of life.

When he likes somebody, he has a hard time seeing their flaws. When he does find a flaw, he might have a hard time continuing to like them.

The early stages of dating a Scorpio man can be especially frustrating. He’ll ghost somebody he’s casually dating for the smallest reasons. He often won’t say why either.

Something you do might throw up a red flag for him. Instead of talking to you about it or clearing up a potential misunderstanding, he’ll just run off to protect himself.

He won’t care about your feelings when he suddenly ghosts after a few dates. He’ll just make sure he’s taking care of himself.

He also might have a hard time seeing things from your point of view. He looks at life in one way and doesn’t always understand how people can see it differently.

This can make him seem selfish because he might not always think your opinions and views are as valid as his own.

Jealousy is one of a Scorpio man’s negative traits. If you know anything about Scorpio men, you likely already know that they get a reputation for being jealous.

Scorpio men don’t just get jealous when it comes to their partners. They get jealous about everything!

A Scorpio man might get jealous when his coworker or friend gets a new promotion. Instead of being happy for them or congratulating them, he’ll just focus on his own feelings of envy.

He’ll also get jealous when other people flirt with his partner, even if it isn’t actually a problem. He doesn’t always act rationally when he’s jealous.

Sometimes, a Scorpio man acts like he doesn’t care instead of just talking to his partner about his feelings of jealousy. He can’t always ignore those feelings forever, though.

He doesn’t always consider how his jealousy makes others feel. He just gets caught up in his own emotions.

When a Scorpio man feels strongly about something, he can act obsessive over it. Sometimes, his obsessive nature can get in the way of other things in his life.

He’ll ignore everyone around him if he’s really focused on a particular hobby of his.

If he’s gone down a rabbit hole looking for information about a specific topic, he might disappear off the face of the planet for a few days while he learns everything there is to know.

He also gets obsessive about people sometimes. He may ignore his friends because of a new partner. He might even ignore his best friend in favor of a different, newer friend.

When he’s focused on an obsession of his, he doesn’t always pay attention to the people around him as well.

Some Scorpio men’s communication skills leave much to be desired. Not all of them communicate in a demanding way but some do.

He isn’t always trying to seem demanding, though. Scorpio men can just be very upfront sometimes. They are assertive and they know what they want.

If he wants something from you, he’ll have no problem letting you know.

The key to seeing if he’s selfish is seeing if he returns favors. If he asks a favor of you and then gladly says yes when you ask a favor in return, he’s not selfish.

Scorpio men can be extremely manipulative at times. Not all of them are and even ones who are don’t go out of their way to manipulate everyone around them.

Often, this manipulative behavior comes out the most when a Scorpio man is interacting with people he doesn’t know well or doesn’t care about that much.

If he doesn’t like somebody but he knows he can easily convince them to do things for him, he’ll pretend to like them. If he thinks he can get something out of somebody he normally wouldn’t interact with, he’ll keep them around.

He doesn’t always think about how this behavior might make the other person feel. Even if he does realize that he’s being unfair, he might not always care.

Manipulative behavior within a relationship is one of the signs a Scorpio man is playing you.

A Scorpio man feels emotions deeply. This can cause him to act in extreme ways if he doesn’t have good control of those emotions.

A Scorpio man may become distant out of nowhere. One minute he’ll be chatting with you and spending lots of time with you and the next he’ll totally ghost you.

The best way to deal with a Scorpio man when he becomes distant depends on your relationship with him.

If you’re his best friend or partner and he’s ignoring you, you can call him out for his poor behavior. If you don’t know him that well, you’re better off just giving him space.

He might act possessive over a partner. If this goes too far into the negative side of things, he might try to keep his partner away from others he thinks are flirting with her or showing too much interest.

His selfish nature can really be seen when he’s acting possessive. He’ll get angry when a friend hangs out with somebody else. He’ll act irrationally if he thinks his partner is paying too much attention to another man.

If he is particularly possessive over certain belongings of his, he won’t want to share them. Of course, everyone has things they like to keep to themselves. He’ll be reluctant to let you borrow something even if you legitimately need it, though.

Scorpio men are extremely loyal to the people they love. Loyalty is one of the signs that a Scorpio man has feelings for you.

He will do anything for the people he cares about. He will offer endless support and always be there when you need him.

Scorpio men often get a reputation for being selfish cheaters who only care about sex. This couldn’t be further from the truth!

In reality, Scorpio is one of the most loyal partners out there. He won’t give up a relationship for a moment of instant gratification. He will consider his partner’s feelings and remain loyal to her.

Scorpio men are highly devoted and dedicated partners and friends. There is no end to what he would do for the people he loves.

Scorpio men are perfectly capable of acting selflessly. If he needs to go without something so that his friends and family will have what they need, he’ll gladly do it.

A Scorpio man’s devotion can be seen strongly if he has children. He will do anything to ensure that they are happy and comfortable, even if it means sacrificing his own happiness sometimes.

If you have won the love and devotion of a Scorpio man, you’re going to see his selfless side. You might still see him act selfishly toward other people, though.

The reason some people see the selfish side of Scorpio and others see his selfless side has to do with whether or not he loves somebody.

When a Scorpio man loves you, he’ll do anything for you. He is a loving and affectionate friend and partner.

He will do anything he can to make sure his loved ones know he cares about them. No sacrifice is too big if it means they feel loved.

If a Scorpio doesn’t love you or particularly care about you, he’s not going to go out of his way for you.

Scorpio men aren’t the type of people who endlessly give to everyone around them. They save their energy for the people they are close to.