How to Seduce an Aquarius Man in 5 Easy Steps 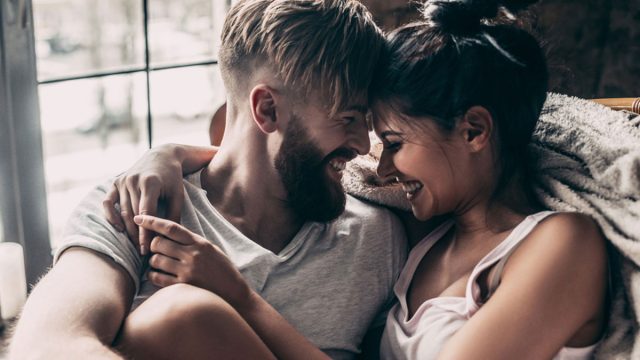 If you want to seduce an Aquarius man, be mysterious!

An Aquarius man loves to understand the complexities of a person. Driven by intellectual curiosity, he will be more interested in developing physical intimacy with those who are different.

You just have to remember one thing: dump run-of-the-mill traditional approaches to sex and try new methods that are against social conventions.

He likes new experiences and will love if you let his imaginative mind go wild. He has a child-like curiosity that helps him ensure that your experience in bed is a memorable one.

Women dating Aquarius men are always worrying over how to keep an Aquarius man hooked. But it’s simple: an Aquarius man loves non-conformity and would love to create his own ways of doing things.

People often wonder: what type of women do Aquarius men like? An Aquarius man is usually attracted by the individuality of a woman. You must offer something unconventional and exciting that can hold his attention for a long time.

One of Aquarius man traits is that they are extremely sociable. Naturally, they’d expect the same from the woman they are spending the time with. So, when you’re with him, put your guards down. Smile a little and laugh more.

You should also not have any qualms in showing a bit of your quirkier side. This is what he’d appreciate, as he loves women who are a bit unconventional. Talk about all your ideas, regardless of how strange they are.

An Aquarius man has strongly held beliefs about particular things. Since he is rebellious in nature, he doesn’t mind questioning the conventional. Don’t let this quality of his intimidate you.

An open-minded conversation with him can set him in the right mood, and it can be more beneficial than all the dollars spent on scented candles and the expensive oil diffusers. Aquarians are often attracted to people who are different.

Talking doesn’t explicitly make him want to be intimate with you, but it will compel him to get to get physically close to you. Sharing ideas doesn’t seem like a tip for seduction, but it actually is!

Aquarius men are known for being unconventional.

A unique, albeit strange, trait that an Aquarius man has relates to his ability to separate sex from love. If an Aquarius is sleeping with you, it may not indicate that he is into you! Sounds confusing, right?

Often misconstrued as arrogance, this trait simply shows that he values his independence over anything else. Uninspired by compliments on his outwardly look, he’s more invested in those women who know how to read an Aquarius man.

And this can only be achieved if a woman is not only able to understand his ideas and beliefs, but also challenge them. By presenting him with unique, debatable topics, you actually make him fall for you.

While treading on this domain, you have to put an effort toward understanding an Aquarius man. He can be blunt and upfront and, at times, can dismiss your ideas in the blink of an eye. Don’t get offended!

If you want an Aquarius man to take your relationship to the next level and not have casual sex, flirt with his mind. That’s the key to his bedroom and heart, and something that he’d genuinely enjoy.

Talking to him about sex is easy. He will not shy away from the most intimidate questions and will be happy to tell you how he’d prefer to make love and, mind you, will give his answers with considerable ease.

If you are uncomfortable talking about it, share an article on the subject. And before you know it, things will get steamy and you’ll be having a practical demonstration of all his answers. Not a bad bargain, right?

Relax! It isn’t suggesting that you deliberately put the man of your dreams in the much-dreaded friend zone. It means that you don’t have to be pushy as your excessive care will inadvertently push you away from him.

An Aquarius man is afraid of losing his freedom. That’s the biggest turn off for him. If you want an Aquarius man to stop ignoring you, don’t be clingy. While planning for the weekends, try to keep your activities separate.

But he won’t mind you keeping in touch with his social circle and mingling with his friends. An Aquarian man likes it when his partner makes an effort to socialize with the people he knows.

Even though most of the Aquarius men are loyal in their relationships, they don’t want to be under a controlling environment. One of the biggest turn-offs for him will be your constant phone calls and texts. It’s a red-painted ‘don’t.’

Keep the phone away even if you are tempted to know what he was doing on Snapchat at 3am in the morning. This is a no. Let him have his ‘me-time’ which he doesn’t want to share with anyone.

Even when your sex life is thriving, you will sometimes find him aloof. That’s your man telling you to leave him be and let him enjoy his solitude.

4. Up Your Wardrobe Game

This isn’t a segment on what you should wear. However, there are tips on dressing that will get an Aquarius man to chase you. These include certain cuts and colors to which an Aquarius man responds well.

When it comes to color, an Aquarius man dies for blue. Even though Aquarius relates to water, the zodiac is actually an air sign. This is why Aquarian men have a liking for everything in blue and silver.

When it comes to dressing, follow the general rule: an Aquarius man loves the unusual, so don an outfit that he has never seen you wear before. Be playful with your style, but don’t get too outrageous.

An Aquarius man won’t get much excited by a revealing outfit so it’s better not to get overtly flirty. Keep things subtle. An unusual style of dressing is something which is different than your casual attire.

If you wear bright colors on a normal day, try finding a dress in a darker shade for the special night. An Aquarius man wants to see you in a dress he hasn’t seen you in before.

Also, he will appreciate if you wear an outfit that only some people can pull off. A dress with unconventional cuts may grab his attention. Bright colors like electric blue or yellow also appeal to the eyes of Aquarius men.

While deciding how to dress for an Aquarius man, go for the dresses with delicate details like lace, shiny accents, and strange elements on it. The point is to avoid an outfit that shows a little too much flesh.

While a flirty, revealing dress might make you feel sexy, it will ruin the element of surprise for an Aquarius man. Hence, it is important to dress properly.

5. What to Expect in Bed

To seduce an Aquarius man in bed, you will have to see how he prefers lovemaking. For a select few, an Aquarius man’s habits can be out of the ordinary – which goes well with his personality trait.

He may not give that impression, but he is a passionate lover. He wants to invest time and doesn’t want to get done with it as if it was an item on his to-do list.

An Aquarius man likes foreplay and loves to set the mood. Even though he is not demanding, he would prefer taking the lead.

If you suggest him anything new – a role play – he’ll be happy to try it out. He will also be interested in talking during sex. This doesn’t have to be the so-called dirty talk.

When having sex, he likes to keep the lights on. While for some this sounds like lust, for him it’s an experience he wants to map in his memory. He’d expect you to talk about your feelings.

Since he is immune to sexual insecurity, you’d be surprised to know that talking about your previous escapades will turn him on. So there’s something unusual for you. Any kind of knowledge for him is sexy and a turn on.

When it comes to physical appearances, an Aquarius man is not interested in them. His connection is linked with a woman’s mind and he is not into a specific body type.

Similarly, he is not someone who will be cautious of the age of his lover. These barriers are societal and he wants to break them. He doesn’t consider a woman an object and sees them as an equal partner.