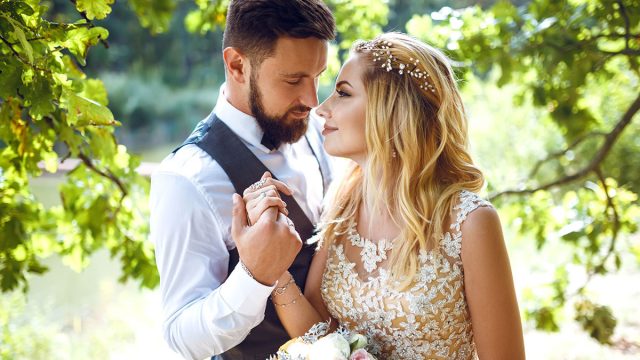 If you know two people born under these star signs who are having a wedding, you might wonder about the typical Scorpio man Virgo woman marriage.

Is this an astrologically compatible match?

Some zodiac signs seem like a great couple at the beginning of their relationship, but after some time has passed, their incompatibilities start to show.

So, do Scorpio and Virgo have what it takes to make their union last a lifetime, or are they likely to split?

Once you know more about their zodiac signs’ traits and behaviors, you will be able to predict a Virgo woman and Scorpio man‘s marriage compatibility.

One of the most helpful astrological aspects when predicting the romantic compatibility of two signs is their natural elements.

Every zodiac sign belongs to one of the four elements of nature: fire, air, earth, or water. The elements reveal some of the quintessential characteristics of the signs.

They can also help us predict compatibility by observing how the elements interact in the wild.

Scorpio is one of the water signs, and water signs are known for being emotional, sensitive, and intuitive.

This may come as a surprise to anyone who doesn’t know a Scorpio man very well because he likes to appear tough and stoic.

He puts up an aloof and unemotional front, but the truth is that he experiences his feelings profoundly and he can be quite sentimental.

Virgo is an earth sign, and earth signs are known for being practical, logical, and reliable. When it comes to emotions, a Virgo woman is the complete opposite of a Scorpio man.

She isn’t very in touch with her emotions, so she uses her head instead of her heart to make decisions and guide her path.

She doesn’t get her feelings hurt easily but she can also be a bit tactless and insensitive to others.

Her ability to stay calm and composed in difficult emotional situations makes a Scorpio man obsessed with a Virgo woman. He admires her strength and wishes he could be the same way.

But her stoicism could also lead a Scorpio man and Virgo woman to break up, even if they are married. She can be insensitive to his emotional needs, and he can be too delicate for her at times.

Another astrological aspect that can help us predict the Virgo woman Scorpio man compatibility is their guiding planets. Every star sign has a ruling heavenly body that conveys something important about that sign.

Scorpio is one of the few zodiac signs with more than one guiding planet. Scorpio is ruled primarily by Pluto, the planet of transformation, death, and power, and secondarily by Mars, the planet of war and aggression.

His planets reveal that a Scorpio guy is intense and power-hungry. He will do whatever it takes to get what he wants, and he can be quite combative.

Although the ruling planets of Scorpio and Virgo are quite different, they aren’t at odds with each other.

A Virgo woman will enjoy the powerful, dominant nature of a Scorpio guy. She is ambitious but not particularly power-hungry, so she is happy to let him take the lead in most circumstances.

He appreciates her sharp mind and great intellect, which makes him respect her and value her opinions.

Their planets show that, as a married couple, Virgo and Scorpio make a powerful force to be reckoned with. Their skills complement each other and they make an amazing team.

Every star sign has one of three modalities: cardinal, mutable, or fixed. The modalities tell us how the signs handle problems and move through the world.

Scorpio is one of the fixed signs, and fixed signs are stubborn and slow to initiate. They are set in their ways and dislike change. They are also great at finishing any projects they start.

Virgo is a mutable sign, and mutable signs are accommodating, adaptable, and versatile. They negotiate or work their way around problems instead of confronting them directly, and they are communicative and easily distracted.

You might think that having different modalities makes two star signs less compatible for marriage, but the opposite is true.

Her mutable modality makes a Virgo woman willing and able to adapt to the needs of a stubborn and unyielding Scorpio guy.

She can teach him how to be more accommodating and accepting of change, while he can help her stand firm in her convictions.

When Virgo and Scorpio fight, it will almost always be the Virgo woman who apologies or makes the first move towards reconciliation.

He needs a partner who will placate him at times, and she needs someone who will support her and have her back. Their modalities show us that Virgo and Scorpio can fulfill these needs.

Each astrological sign is the head of one of the houses of the zodiac. The houses convey the values and strengths of that sign.

Scorpio is the ruler of the eighth house, which is the house of intimacy, sex, merging, and partnerships.

His house tells us that a Scorpio man yearns to find his true love so he can settle down and build a life with her. He also values his interpersonal relationships, including friendships and business partnerships.

When he finds his dream woman, he will want to merge his life with her completely and share everything with her.

This makes Virgo obsessed with Scorpio because a Virgo woman is also looking for a partner to share every aspect of her life.

Virgo is the head of the sixth house, which is the house of health, fitness, systems, service, and organization.

Her house reveals that a Virgo woman enjoys supporting others and needs to feel helpful to have a sense of purpose.

This makes her perfectly compatible with a Scorpio man because he loves the way she is so eager to lend a helping hand to her loved ones.

They are both looking for a life partner and a dream romance, which they can have in a marriage with each other.

All twelve star signs have a spiritual or mental age determined by the order of the zodiac. As the sixth and eighth signs, Virgo and Scorpio belong to the same age group.

Scorpio and Virgo are both adolescent or young adult signs, which means that they place a great deal of importance on their interpersonal relationships.

They care about their reputations and what other people think of them. Like teenagers and young adults, they may suffer from self-consciousness as they struggle to figure out their place in the world.

Being in the same spiritual age group makes a Scorpio man and a Virgo woman compatible because they have similar worldviews. They have the same maturity level and they want to impress others.

Every sign has a unique symbol, usually an animal, that encapsulates the quintessential traits of that sign.

The symbols can also help us predict compatibility by imagining how the symbols would interact in the wild.

Virgo is one of the only signs that doesn’t have an animal as its symbol. Instead, Virgo is symbolized by the human virgin.

This could make a Virgo woman and a Scorpio man sexually incompatible because Scorpio is known for being the sexiest sign of the zodiac.

Scorpio and Virgo in bed together might not be on the same page. A Scorpio man is freaky, open-minded, and libidinous, while the sign of the virgin can be prudish and conservative in the bedroom.

Scorpio is symbolized by the scorpion, which tells us that a Scorpio guy is unassuming but deadly.

Like the scorpion, he lies in wait, waiting to strike his enemies. He can be particularly dangerous when provoked or backed into a corner.

There are many strengths to a marriage between Scorpio and Virgo because these two signs are compatible in several ways.

For example, a Scorpio man and a Virgo woman as parents make the ideal team. They are both nurturing and caring, and they will tend to all of their children’s needs.

The Scorpio parent will dote on his children and take care of their emotions, while the Virgo parent will provide structure and make sure the kids are healthy and planning for the future.

Scorpio and Virgo also make great partners should they decide to go in on a business venture together during their marriage.

Although their marriage has several strengths, there are some weaknesses to a Scorpio-Virgo union, too.

It’s possible that a Virgo woman and a Scorpio man are sexually incompatible. They have opposite views of sex and might not be able to fulfill each other’s needs.

They can also both be very controlling, so they might struggle for power sometimes in their relationship.

Both of these signs might be too conservative and cautious, so they could find themselves becoming stagnant and bored in their marriage.

While a Virgo and Scorpio marriage won’t be perfect, the overall compatibility of these two signs is strong.

These two signs work well as a team, and when they set their minds to something, together they can be an unstoppable force.

If they can get past some of their differences, a Scorpio man and a Virgo woman can have a happy, successful marriage that lasts a lifetime.