How to Get a Scorpio Man to Respond to Your Text 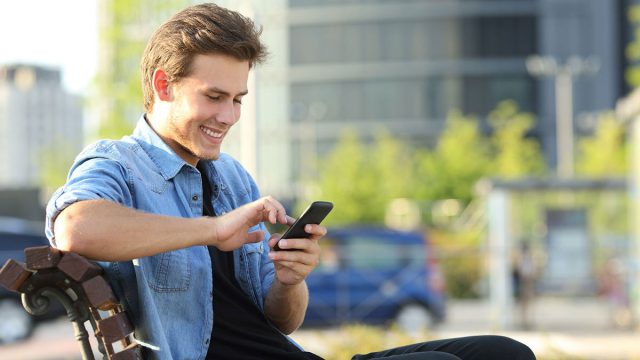 A Scorpio man’s text response time can vary greatly. Sometimes, he’ll answer in an instant and keep the conversation going for hours.

Other times, he’ll be silent for days. Don’t overthink it, Scorpio men are just complicated when it comes to texting.

If you’re obsessing over the question “Should I text a Scorpio man first?” chances are, you’re experiencing his confusing communication style. It’s frustrating trying to figure him out.

He’s obsessively loyal and also aloof and mysterious. How do you know what he really wants? When is it ok to text him? Sometimes it’s best to leave him alone.

You have to know how to text a Scorpio man in order to not fall into the trap of overwhelming him with emotion. Texting a Scorpio man can be a key to seduction.

When you don’t text a Scorpio man for a while, you’ll naturally trigger his chase instinct. This is the best way to get his attention. But you have to be prepared. Like a busy call center, a Scorpio man’s wait times may vary.

Sometimes he’s responsive, sometimes he isn’t. Don’t take it personally. Treat him like you’ve got important and interesting things going on in your life of which he is only one small part.

Even if you’re madly in love, downplay it. The more you are a mystery to a Scorpio man, the more eager he will be to find you and pursue you. Don’t make yourself available all the time.

Although you may be excited to hear from him, curb your enthusiasm. Make him wait for you. Don’t do this out of spite. Do it to make him anticipate the seduction ahead.

Leave Hints but Don’t Tell All

Are you seeing signs a Scorpio man is not interested? Or are you misreading his signals? Be as enigmatic as he is. When you text a Scorpio man, leave bread crumbs, small hints here and there.

Never be an open book with a Scorpio man. He’ll get bored easily. He needs to work for your attention. Don’t tell him that, but show him by not being too revealing. This is true of your communication and your intimacy.

Make him earn your trust and attention. Don’t reveal your whole life story. The more you can seduce him by being vague and exciting, the more you’ll have him eating out of the palm of your hands.

You need to know what to say to a Scorpio man to get his attention. The key is to remember less is more. Practice the art of minimalism and make every word count.

Use your words carefully and you can get more leverage for your texts. Keep him guessing. This will drive a Scorpio man wild. He may stay up all night second guessing what you really meant in a certain message.

He overanalyzes everything. Don’t provoke his jealousy but do give him some food for thought, in very few words. This will keep him coming back for more.

If you see signs that a Scorpio man has feelings for you, don’t get too excited. The worst mistake you can make is to open up and pour your heart out to him. Save that for much later in the relationship.

Attracting his attention is only the first step. Keeping it is a whole new game. To keep the seduction fresh, play to his desire for beauty and sexuality. Send seductive selfies.

Don’t be too revealing, make him use his imagination. Do give him some hints to work with, though. The more you can entice him with reminders of your beauty, the better.

Sometimes saying nothing at all and letting pictures paint a thousand words is the best thing you can do to get a response from a Scorpio man. He’ll be excited by your beauty and sensuality.

Sexting is one of his favorite pastimes. You don’t want the whole relationship to focus on sex, sending him an inviting photo from time to time never hurts.

How does a Scorpio man act when he likes you? Like a mystery. He prefers it that way. He wants to be like a code you have to crack or a puzzle you have to solve. Respond in kind.

Text your Scorpio man riddles that challenge his mind and force him to really put the clues together. Don’t be too vague or he’ll stop engaging altogether. Instead, play on his intellect.

You may leave riddles about where you’re taking him for dinner tonight or riddles about what you are or aren’t wearing, for example. Keep his intellect and curiosity engaged when you want him to text back.

You can also be a riddle to him by being hard to figure out. Keep him guessing, don’t be too easy to size up. Scorpio men love to dive deep into relationships, but they also become bored once they’ve solved all the puzzles.

Keep reminding him through text that he doesn’t have you all figured out, no matter what he thinks. A Scorpio man will feel exhilarated when he has to work for the connection.

Ask for His Advice

If you want to know how to make a Scorpio man miss you, you’ve got to be able to push all the right buttons. Make him feel important. One way to do this is to ask his advice. Show him you care about his opinion.

When you ask for his advice, be sure to take it. Don’t just ask and then argue with him. Treat him like an authority on a subject and show respect for his opinions, even if you disagree.

When you ask a Scorpio man for advice, you make him feel in control. Also, you’re asking a question that he sees as requiring an urgent response. You’re not cornering him emotionally.

This makes him feel much more comfortable responding to you right away. Though you’re demanding an intellectual response you’re not asking for an emotional investment and so it’s a low risk proposition on his side of the conversation.

Flirt with Him through Text

Flirt with your Scorpio man to keep things fresh and interesting. Of course, you don’t want to do this all the time. He will feel like the conversations are trite and lacking if you only focus on romance and sex.

Make sure you interject plenty of intellectual conversations into the mix. But don’t underestimate the power of flirtation. This is a great way to spice up the relationship.

It takes the edge off when you flirt with a Scorpio man. He can’t resist returning the flirtation. He loves to feel flattered and you’ll definitely boost his ego when you do this.

Scorpio men love romantic and sexual attention. As long as you have plenty of other topics to fill in the conversation with, flirting heavily through text will definitely get a Scorpio man’s attention.

If you find yourself saying “Help! My Scorpio man is ignoring my texts!” your timing may be off. He may want to respond but Scorpio men are known for becoming obsessed with their different hobbies.

If he’s jamming with his band, he may ignore you because he’s wrapped up in his music. The same is true if he’s researching something online, talking to friends or family or involved in solving a problem.

This doesn’t mean he suddenly doesn’t love you. It just means he is good at having tunnel vision when he wants to. The same is true when he is at work. He may not respond right away because he’s focused on other tasks.

Give him a chance to respond and explain what he’s up to before assuming the worst. Don’t jump to the conclusion he’s ignoring you, he may just be busy.

Appeal to His Humor

Scorpio men have a dark and witty sense of humor. If you send him a text that plays on words or appeals to his off-beat humor you’ll get his attention. Odds are good, he’ll respond right away.

Humor hits a Scorpio man and can break through a bad mood. It will put him in a mood to engage and banter back and forth. The only exemption to this is if he’s busy.

Sometimes he’ll break away from work to respond, at the very least to acknowledge you. When you show off your humor, you’ll remind him why he’s attracted to you and he’ll respond.

If a Scorpio man misses you, he’ll let you know. Sometimes it takes him a while to respond to you. If he doesn’t text back right away it could be because the conversation was becoming trite.

Scorpio men have little tolerance for such things. Try to avoid sending frivolous texts. Humor is not frivolous in his book, but small talk is.

Don’t text him to ask what he’s up to or how his day was. You’ve got to pack a bigger punch than that if you want a Scorpio man to pay attention to you and respond right away.

If he starts to think you’re just trying to get his attention, he’ll lose interest. You’ve got to remain a step ahead of a Scorpio man. Be sure you reach out when there is something to communicate that is worth his attention.

Are Scorpio Men Submissive in a Relationship?How Do You Get a Scorpio Man to Text You?
Hello, I'm Liz