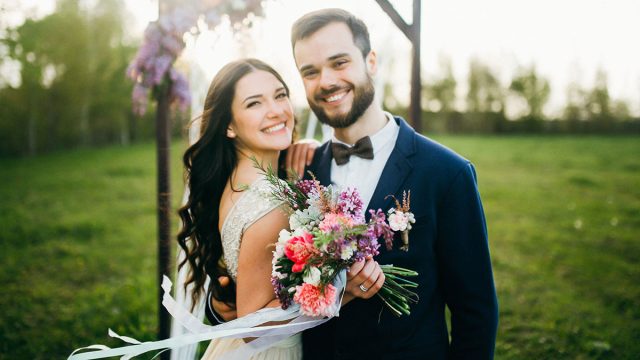 If you know a Scorpio-Pisces couple that’s getting married, you might be curious about the Scorpio man Pisces woman marriage compatibility.

Are these two zodiac signs destined to have a successful union?

Some signs are innately more compatible than others, so what do the stars have to say about a marriage between Scorpio and Pisces?

Thanks to the astrological forces behind their signs, a Scorpio man and a Pisces woman are soulmates.

Once you have a better understanding of their signs, you will see why they make such a strong marriage match.

One of the most important astrological aspects when it comes to romantic compatibility is the natural elements.

Every zodiac sign belongs to one of the four natural elements: fire, air, earth, and water. The elements tell us about the disposition and temperaments of the signs.

They also help us predict compatibility by observing how the elements interact with each other in the wild. Two signs belonging to the same element tend to be the most compatible.

A Scorpio man and a Pisces woman are innately compatible because they both belong to the water element. This gives them a natural connection and instant chemistry.

With a Scorpio man and a Pisces woman, it’s love at first sight. These two signs recognize they have a kindred spirit in one another right away.

Water signs are known for being emotional, sensitive, and intuitive. A Scorpio guy and a Pisces lady will quickly see these qualities in each other.

Her sensitivity and generosity make a Scorpio man attracted to a Pisces woman, while she loves the way that he can always tell what she’s thinking and feeling.

The planets are another astrological aspect to consider when predicting marriage compatibility. Each sign is guided by a heavenly body that tells us about that sign’s personality.

Scorpio is one of the few zodiac signs with more than one guiding planet. Scorpio is ruled by Pluto and, to a lesser extent, Mars.

Pisces is ruled by Neptune, the planet of dreams, illusions, magic, deception, and addictions. Her planet tells us that a Pisces lady is ethereal, otherworldly, and prone to addiction.

A Pisces woman and a Scorpio man are a compatible marriage match because their planets don’t clash with each other.

Her interest in his dreams makes a Scorpio man obsessed with a Pisces woman. She wants to know not only what he sees when he falls asleep, but also about his goals and ambitions.

A Pisces woman likes the way a Scorpio man isn’t afraid to stick up for himself. He can protect her and teach her to become more assertive.

Each sign has one of three modalities: fixed, cardinal, or mutable. The modalities tell us how the signs approach tasks and solve problems.

Scorpio is a fixed sign, and fixed signs are typically stubborn and slow to initiate. They are set in their ways and don’t embrace change.

They don’t take on a lot of new projects, but they are good at following through with their commitments and finishing whatever they start.

Pisces is a mutable sign, and mutable signs are adaptive, versatile, and communicative. Mutable signs adjust easily to change and prefer to negotiate or work around problems.

You might assume that having the same modality makes two zodiac signs more compatible, but this usually isn’t the case.

A stubborn Scorpio man needs an easy-going and laid-back partner like a Pisces woman, and she needs someone who can help her stand her ground.

Every astrological sign leads one house of the zodiac. The houses reveal the sign’s values, strengths, and priorities.

Looking at the houses of two signs can help us predict their marriage compatibility because we need to see if their goals and values are aligned.

Scorpio rules the eighth house, which is the house of sex, intimacy, merging, and shared resources.

His house tells us that a Scorpio man’s greatest ambition is to find his soulmate and build a life with her. He craves a deep, intimate connection, and he wants to share everything with his partner.

Pisces is the head of the twelfth house, which is the house of endings, closure, healing, and spirituality.

This means that a Pisces woman is more focused on what happens in the afterlife than anything to do with the earthly realm.

A Scorpio man in love with a Pisces woman can keep her grounded and remind her to pay attention to worldly things, while a Pisces lady can help her Scorpio spouse get in touch with his spirituality.

While their goals might not be the same, they don’t clash with each other and they work well together.

Each sign has a spiritual or mental age determined by the order of the zodiac. The ages tell us where the signs are on their spiritual journey.

As the eighth sign of the zodiac, Scorpio is one of the adolescent or young adult signs. These signs are concerned with their interpersonal relationships and how others perceive them.

As the twelfth and final sign, Pisces is the oldest sign of the entire zodiac. A Pisces woman has an old soul, and her spirit possesses the sagacity and wisdom that comes with age and experience.

These ages are compatible because a Scorpio man can remind a Pisces woman of the delights of youth without being childish or immature.

In return, the Pisces woman is patient with her temperamental Scorpio partner and can offer him good advice when he asks for it.

Every astrological sign has a unique symbol, usually an animal, that embodies the distinctive qualities of that sign.

The symbols help us predict marriage compatibility by telling us about the personalities of the signs and by allowing us to observe how the animals interact in the wild.

Scorpio is represented by the scorpion, a small but deadly creature. Like a scorpion, a Scorpio male doesn’t allow many people to get close to him, and he can be dangerous when provoked.

Pisces is represented by the fish, which conveys the malleable nature of a Pisces woman. Like a fish, she goes with the flow and is very easy-going and accommodating.

Their symbols tell us that a Pisces woman and a Scorpio man are highly compatible because their animal representatives can coexist peacefully.

The fish and the scorpion don’t threaten or intimidate each other, which bodes well for a Pisces and Scorpio marriage.

There are many strengths to a marriage between a Scorpio man and a Pisces woman. These two have so much in common that they are practically the same person.

They are both sensitive, emotional, complex, and mysterious. Not many people know what lies beneath their cool, calm exteriors.

A Scorpio man and a Pisces woman are protective of each other because they understand one another’s vulnerability.

They are comfortable with emotional expression, but they don’t like to show it when other people get under their skin.

A Scorpio man and a Pisces woman are sexually compatible because affection, passion, and romance are equally important to both of them.

They both need physical touch to feel loved, and they will never deprive each other of attention and tenderness.

There are far more strengths than weaknesses to a Scorpio and Pisces marriage, but no union is perfect.

A Scorpio man can sometimes be harsh, cruel, and abrasive. The Pisces woman won’t like it when she is the target of his wrath, and she will wish he could be more laid-back sometimes.

A Pisces woman is very indecisive and at times lethargic, which the Scorpio partner might mistake for weakness or laziness. He will occasionally wish his spouse was more motivated and assertive.

A Scorpio man gets worked up over little things, while the Pisces woman takes everything in stride. She might tire of constantly soothing and placating her grumpy and mercurial spouse.

Overall, their compatibility weaknesses are greatly outweighed by strengths, and most of their disagreements can be resolved easily.

Because these two signs are so similar and compatible, a Pisces and Scorpio marriage is likely to be successful.

They have many important things in common, like their emotional natures and communication styles, that will make their married life blissful.

Most of their differences work in their favor to help them balance and complement one another. A Scorpio man’s weaknesses are a Pisces woman’s strengths and vice versa.

Most importantly, they will always be loyal and put each other first. They never have to doubt their commitment to each other, and they will never lose the spark of passion.

Very few other zodiac signs offer the same level of compatibility with Scorpio man or Pisces woman, so they are unlikely to be tempted by someone more suitable.

A Scorpio man and a Pisces woman are soulmates, so their union will last even beyond this lifetime.