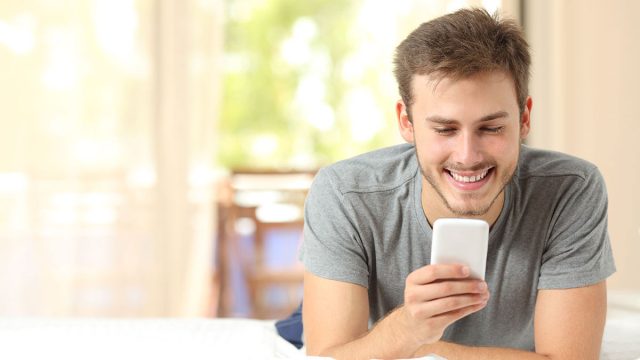 If you are dating a Scorpio guy over the internet, you need to know how to attract a Scorpio man online.

What are some tips and tricks to catch his interest over the web?

Dating in person is already complicated enough, and dating online can be even more difficult for some.

Intentions may get lost in translation, the tone of messages can be tricky to read, and you never really know who is on the other end of the computer screen.

If you want to learn how to seduce a Scorpio guy over the internet, all you need to know are the personality traits and psychological characteristics of his zodiac sign.

Just a tip before we get started: the best place to find your dream Scorpio man online is eHarmony. eHarmony is filled with more handsome men than you could ever dream of, making it the perfect place to practice your seduction techniques. Click this link to create your FREE account with eHarmony.

Scorpio men are very guarded, and they don’t let anyone into their private worlds easily.

When a Scorpio has a crush on you, he will probably put you through a number of tests to make sure that you are compatible with each other before committing to you.

If you want to attract a Scorpio man online, you need to watch out for his tests and know how to pass them.

He might ask you the same questions over and over again at different times to make sure you give the same answer.

Or he could ask you to do things, like send photos of yourself, just to see if you will do it.

Keep an eye out for a sneaky Scorpio man’s tests, and always be yourself and be honest so that you pass them.

2. Ask Him What He’s Looking For

If you are wondering how to tell if a Scorpio man is interested in you, you should just ask him directly.

There is no point in wasting time dating somebody, even online, if you are looking for different things from the relationship.

Scorpios are great at manipulating other people to get what they want, but a sincere Scorpio man will be honest with you.

Scorpios hate small talk and would much prefer to cut to the chase. Even if you haven’t been talking to him online for very long, it’s never too early to ask him what he’s looking for online.

Maybe he just wants a fling, or perhaps he’s looking for a serious relationship. Maybe he wants to meet in person eventually, or he might just want to keep the relationship online.

Regardless of whether or not you are on the same page, your Scorpio man will admire your confidence and directness if you just ask him what he wants.

If you want to know how to get a Scorpio man to chase you, trying to make him jealous is never the answer.

What a Scorpio man wants to hear is that he is the only guy you are talking to online, not that you have dozens of other chat dates lined up after him.

When you want to attract a Scorpio guy, don’t tell him if you are dating other men at the same time. You shouldn’t lie, either, but simply don’t bring it up unless he asks.

If he does ask whether or not you are seeing other people, be honest. If you’re only into him, tell him that – he will love to hear it!

But if you are seeing other guys, too, tell him that you have been talking to someone else but you don’t have strong feelings for them.

Ask your Scorpio man if he wants to take your relationship to the next level and be exclusive. He will be thrilled that you are willing to drop those other men for him.

Dating a Scorpio man online can be tricky because as much as he wants you to tell him everything about yourself, he doesn’t like to reveal too much about his personal life.

If he opens up to you and tells you private things about himself, it’s one of the signs that a Scorpio man has feelings for you.

It takes a lot for him to be honest and forthcoming, so he expects the same from you. The best thing you can do when it comes to attracting a Scorpio man online is to be truthful.

If he catches you in a lie or suspects you are deceiving him in any way, he will terminate the relationship.

Scorpio is unquestionably one of the most sexual signs of the entire zodiac, so if you want to impress a Scorpio guy online, you are going to have to send him some sexy messages.

Remember to use caution online and to never reveal too much personal information.

A sexy message doesn’t have to be dirty or inappropriate, although you can send those kinds of messages to a Scorpio if you’d like.

You can just be flirty and send him lots of compliments, suggestive and cute emojis, and let him know with your words that you are interested in him as more than just a friend.

6. Send Him Sexy (But Appropriate) Photos

If you want to seduce a Scorpio guy online and show him who you really are, try sending him a sexy (but not too revealing) photo.

What attracts a Scorpio man physically isn’t a lot of visible skin. He prefers when a woman leaves something to the imagination.

If he asks for inappropriate or nude photos right away, it’s one of the signs a Scorpio man is using you. Beware of this type of Scorpio guy and run in the opposite direction.

When he is interested in getting to know you, he would rather see a photo of you fully clothed, but smiling seductively at the camera just for him.

Choose a photo of yourself in an elegant, conservative dress. Black and red are the colors associated with Scorpio, so an outfit in those colors would be best.

Make sure you are looking directly at the camera because Scorpios love eye contact. He will go crazy for you when he sees how beautiful and classy you are.

What makes a woman gorgeous to a Scorpio man isn’t supermodel looks or expensive clothing, but her inner confidence.

A Scorpio man will be drawn to you no matter what you look like as long as you believe in yourself.

Scorpios have big egos, and they want a partner who is as fabulous as they are. If you don’t like who you are, then why should a Scorpio man like you?

You can show him your confidence by talking yourself up, telling him about your goals and accomplishments, and not being afraid to show him who you are.

If you are wearing a cute outfit and feel extra good about yourself, snap a photo and send it to him.

He will be attracted to your self-assuredness like a magnet and think your confidence is super sexy.

8. Show Him How Smart You Are

Scorpios are highly intelligent and cerebral, so a Scorpio man craves a partner who can carry an intellectual conversation. He won’t respect or settle for a woman he thinks is dull or foolish.

Some men are insecure around intelligent women, but not Scorpio guys. They would rather have a partner who is equally as smart as they are, if not even smarter.

Never try to attract a Scorpio man online by playing dumb or acting more naive than you really are. He wants an intelligent partner, so don’t be afraid to show him how smart you are.

Tell him about your education, the book you are reading, and the classes you want to take.

He is always looking to learn new things and improve himself, and he wants a partner who does the same.

If you want to make a Scorpio man fall in love with you over the internet, you are going to have to chase him a little bit.

He needs consistent attention to feel wanted and loved, so leaving a Scorpio man alone for too long is a sure way to lose him.

A Scorpio man in love will go crazy with worry if you disappear from his screen for days or weeks without any warning.

If you aren’t going to be online, don’t play games with his head by not telling him. Let him know that you won’t be available to talk, but you’ll be thinking of him.

If he goes silent at any time, it could be one of his tests to see how much you really care about him.

Instead of giving him the silent treatment back, ramp up your communication efforts until he messages you back.

10. Be Positive and Uplifting

One of the signs a Scorpio man likes you is when he comes to you with his problems. He doesn’t confide in many people, and he is counting on you to cheer him up.

Scorpios tend to be dark and pessimistic. If you can brighten up his day with positivity, he will want to talk to you all the time.

To attract a Scorpio guy online, let him vent his frustrations to you, then help him see the silver linings to every situation.

When you can make him feel better and he leaves the conversation with a smile on his face, he is sure to fall for you.