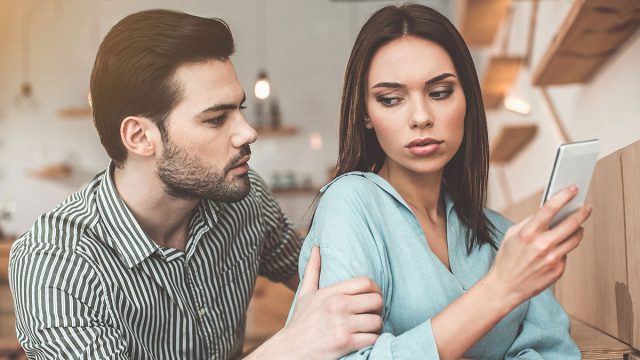 Scorpio is a deep, passionate sign, and so you can expect a Scorpio man’s negative traits to be intense at times.

Many of these traits can be worked on and turned into positive qualities. It just takes a lot of self-reflection.

Not all Scorpio’s traits are negative, of course. Some of their traits are even both positive and negative, depending on their intensity and how you look at them. Manipulation can be persuasion. Obsession can be passion.

If a Scorpio in your life has these, that doesn’t mean they are a terrible person.

Transformation is actually a key trait of Scorpio. They are perfectly capable of using their powers for good instead of evil.

Some of these traits can be extremely hard to live with, though. If you can’t deal with them, that’s completely understandable.

One of the bad traits of a Scorpio is their almost pathological need to keep secrets. Scorpios take a long time to open up and trust people. Even if the two of you are close, he may still not tell you everything.

This is great if it’s your secrets they’re keeping, of course. He’ll take those to the grave! However, there will be times when Scorpio keeps something a secret from you when he really should tell you.

This applies to both important matters and entirely mundane things. He’ll keep things close to the cuff that you would never be secretive about.

He might keep a chronic illness a secret, not to appear too vulnerable, or because he doesn’t want your “pity.” If he does something to betray your trust, you may never find out about it unless he wants you to.

Scorpio men are intense. They feel emotions intensely, and they can easily become obsessed with things or people.

One way this shows up is that Scorpio has a hard time letting go of things. So, for example, he might obsess over a negative comment somebody made years ago and be unable to forget it or forgive that person.

This is one of a Scorpio man’s traits in dating as well. If he likes you, he might become fixated on you. So he’ll look through all your social media, ask mutual friends about you, and message you constantly.

If you break up with him and he still has feelings for you, he will have a hard time letting go of the relationship. He may continue to message you or even ask to get back together.

This can negatively affect his life, as well as the people around him. In addition, being so intense and obsessive all the time is emotionally draining and can drive others away.

This is something you might see listed as one of Scorpio’s positive and negative traits. What some people see as persuasion others might see as manipulation.

Scorpio men can be sneaky and secretive, but they are also intuitive and great at reading people. These traits combined enable them to pick up on the best ways to convince you to do what they want you to do.

He might just be persuading you to see a movie he likes over the one you want to see, and that can be relatively harmless.

When left unchecked, those powers of persuasion can turn into much more severe manipulations, however.

He might convince you to stop talking to a friend of yours just because he doesn’t like them. If he doesn’t like one of your hobbies, his complaints and criticisms might eventually drive you to give it up.

Scorpios are the type to never forgive and never forget. If you do something to betray their trust, you’re going to see the dark side of Scorpio.

If you have a bad breakup with a Scorpio man, don’t expect to get back together with him any time soon. Moreover, expect him to get revenge if it’s because of something you did (lying, cheating, etc.).

He’ll tell all your friends what you did. He’ll complain about you to anyone who will listen. But, unfortunately, his new lover is going to hear nothing but terrible things about you.

When a Scorpio man feels wronged, anger is his first reaction. This isn’t passive anger, either.

He is going to want to do something about it. And, unfortunately, he’ll feel wholly vindicated too, no matter how far he goes in his efforts to get even.

This is one of Scorpio’s personality traits you typically only see when they don’t know you well or if they don’t like you.

Sometimes, a Scorpio man doesn’t mean to be abrasive, and appearing to be so is a misunderstanding. However, Scorpios can be standoffish with people they don’t know well, and this will stop once they warm up to you.

Scorpios will also act abrasively if they feel defensive or vulnerable.

If you try to get him to open up before he’s ready, be prepared to be on the wrong end of his sharp tongue. He’ll lash out during intense arguments as well.

A Scorpio man’s personality isn’t always like this, and it can be startling to see him act this way.

If you know him well, he can be extremely kind and affectionate. Sometimes a switch gets flipped, though, and he can be downright mean.

Scorpio men are demanding in many ways. Indeed, this is a man who knows what he wants, and he will do what it takes to get it.

In a relationship, he may demand a lot from his partner. He might need constant reassurance that you love him.

He’ll demand affection, as well as loyalty and fidelity. If he doesn’t get these things, the relationship won’t last long.

He may also be demanding in bed. Often, a Scorpio knows precisely what he likes and what he expects from his partners. This doesn’t necessarily mean he’s controlling; he will just make his needs very clear.

Sometimes, Scorpio doesn’t even mean to be demanding. He just has a powerful presence, and others may feel the need to give in to his whims.

But, on the other hand, meeting his high standards feels good, so why not give him what he wants?

Jealousy is one of Scorpio’s characteristics you’ll hear about often. But, unfortunately, of all their negative traits, this is the most stereotypical one.

This isn’t a man to play hard-to-get with. If you are out flirting with others in front of him or ignoring him, hoping to make him chase you, you’re going to get the opposite reaction.

He doesn’t like it when his partner flirts with other people. Depending on how jealous he is and how much he trusts you, he might even accuse you of flirting when you haven’t been.

This doesn’t just apply to romantic relationships, either.

For example, he’ll get jealous when a coworker gets a promotion and he doesn’t, when his friends don’t invite him to a party, or when somebody gets a “better” gift than him for the holidays.

His jealousy is intense as well. Expect a strong emotional reaction if he’s feeling jealous, either of sadness or anger.

Scorpio men often see the world in black and white. If they don’t like a person, they have a hard time seeing any of their positive traits. But, on the other hand, if they love you, you’re the best person in the world.

That last part can make this Scorpio trait not seem so bad, but his opinion of you can quickly change if you do something to upset him.

Scorpio’s feelings and opinions are intense. He is an all-or-nothing kind of person.

If you argue, he’s going to have a difficult time seeing your side over his own. Even if you both are right in some ways, he’s not going to see it that way.

Scorpio is one of the fixed signs, along with Leo, Taurus, and Aquarius. This means that Scorpios can have that same stubborn quality often associated with those other signs.

Like with manipulation and persuasion, with different wording, this quality can be both one of Scorpio’s good and bad traits.

Sometimes, sticking to your guns and refusing to give in is a good thing. You can bet that Scorpio won’t compromise his values.

However, refusing to change your ways when they no longer suit you is a bad thing. It can be challenging to get a Scorpio man to compromise in a relationship, even when it would be for the best.

Scorpio is a water sign, and like Pisces and Cancer, they are known for being emotional. However, their emotions are intense, more akin to a storm out at sea than a trickling waterfall.

A Scorpio man will want to hide these emotions. He doesn’t like appearing vulnerable, especially to people he’s not close to. But, unfortunately, this means that when they do come out, they can be explosive.

If he’s been feeling stressed, angry, or sad for a while and just covering it up, the most minor thing might set him off. However, from the outside, this looks like he was perfectly calm one minute and blowing up the next.

However, those emotions were always there beneath the surface. They just weren’t being expressed. When he learns to express his feelings, that volatility will show up less and less.