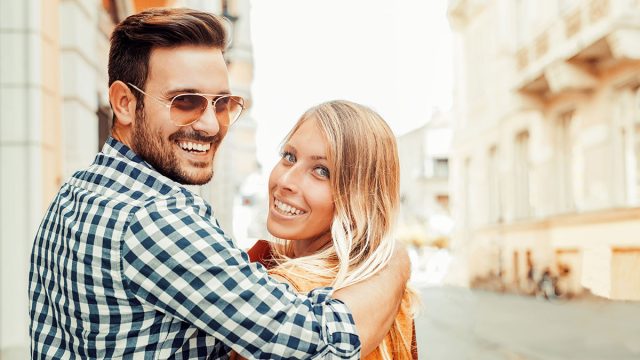 A Scorpio man loves easy, though he will also try hard to hide it at first.

When Scorpio says “I love you,” he’s being sincere. He’s probably fallen in love some time ago. He’ll only admit it when he feels secure.

When a Scorpio man touches you, you may think it’s one of the signs a Scorpio man has feelings for you. This is not always the case. A Scorpio man can fall in love quickly.

Yet he can also have a passionate attraction to you that is based on lust. Be careful not to assume a Scorpio man is in love. His sensuality and affection can seem like mixed signals.

Scorpio men are also known for falling in love quickly and then cooling off because their obsession wears out. Whether what they felt was ever truly love is debatable.

He Goes from Attraction to Obsession

If you’re wondering how to tell if a Scorpio man really loves you, you have to wait out his obsession phase. Scorpio men seem to fall in love easily because they will go from mild attraction to frenzied obsession.

This can be flattering if you are the target of their obsession. Yet if you are expecting their obsessive focus on you to be a constant, you’ll be disappointed. Scorpio men pour all their energy into focusing on you at first.

But no one can sustain the level of attention and affection a Scorpio man shows at first. This “love bombing” inevitably leads to burnout. He may go quiet just because he has to focus on other priorities for a time.

He may also cool off because he’s realizing his obsession was filled with illusions. He may see his obsession as unhealthy and need to pull back. The best thing to do is be patient. If he loves you, he’ll act obsessed again after a short time.

This confuses many women who wonder why he goes hot and cold. Usually, his love never changes. It’s only his behavior that changes and that is simply because his passionate pursuit is not sustainable.

When it comes to love, the more your Scorpio man starts off in a hot sprint, the more likely he will have to slow down at some point. If he starts off like a marathon runner, you have a better chance of him being consistent.

How a Scorpio man expresses his love can also lead to confusion. He can fall in love with you easily but keep silent about it at first. He does this because his silence gives him a chance to observe and learn.

He prefers to know more about you than you know about him. He sees knowledge as power and always needs to have the upper hand in a relationship. A Scorpio man won’t reveal his feelings too soon.

When he thinks it is safe to open up, he’ll admit to the feelings he has for you. By this point, everyone in town will know he loves you and you will know it too. He’ll act like he’s in love long before he admits it to himself or to you.

Just because he hasn’t said the words “I love you,” doesn’t mean he doesn’t feel it. You need to know the signs of a Scorpio man in love with you. He’ll show off around you, act overprotective and want to spend as much time as possible with you.

How does a Scorpio man act when he’s falling in love? He may seem like he’s stalking you from a distance. He may obsessively follow you but then back away when you try to talk to him directly. This is common of shy Scorpio men.

He may also be more assertive and act like you are dating or even married without committing to any official terms. A Scorpio man can also become jealous of your other relationships or friendships and will try to compete with your other friends to get your attention.

He may become dominating and assertive, taking up all of your time or insisting on spending all your free time together. Scorpio men can either hide in the shadows and admire you from a distance while saying nothing.

Or they will be aggressive in their pursuit of love. For a Scorpio man, everything is all or nothing, there is no in between. He may come on strong and make his love known or insist he only sees you as a friend even when you see him treating you like a girlfriend.

The best way to get a Scorpio man to admit that he’s fallen in love is to keep cool and be responsive but don’t chase him. Help him feel secure and never provoke his jealousy. When he consistently sees that you are a reliable, compassionate person, he’ll open up.

He Can Fall in Love at First Sight

A Scorpio man secretly in love won’t keep this secret forever. Often, he will fall in love at first sight and keep his feelings to himself at first. Some particularly bold Scorpio men won’t keep quiet.

Sometimes, a Scorpio man will walk right up to you and tell you he’s been watching you (which may come as a shock) and that he’s intent on marrying you. He loves to make these outrageous statements.

The drama and intensity of the moment turn him on, as does the chase that ensues. How does he know there will be a chase? Because he knows no woman in her right mind will agree to marrying a man who makes such a claim without getting to know him.

A Scorpio man is claiming control of the courtship. He’s announced that he is in love, but he maintains control by telling you he knows what the outcome is going to be. It’s only a matter of time before he sees his proclamation come true.

Scorpio men need to feel like they are in charge. When they go quiet, it is a form of control. Yet when he bursts into your life and declares you’re the woman for him and he will marry you, this is also a form of control.

It’s common for Scorpio men to do this because they fall in love easily. Sometimes what they proclaim to feel as love is something else entirely. But he won’t tell someone he loves them unless he believes this is how he feels.

If his interpretation of his feeling is off, he may realize this at some point. He’ll disappear and chalk it up to a life lesson. Yet he will very likely fall in love at first sight again and insist that this time it is true love.

He Confuses Lust with Love

How do you know when a Scorpio man is falling in love with you? Sometimes you don’t know if what he calls “love” is truly that because he doesn’t even know. Yet you can usually tell if he has a strong attraction to you.

He makes it obvious. Even when he tries to be secretive about his feelings, there is no denying when a Scorpio man is attracted to you. The biggest question then becomes, is he feeling love or lust?

Scorpio men often don’t know the difference between these two things. It can take a Scorpio man a lifetime to understand what love is because he’s prone to relationship addictions rather than actual love.

When he finally figures it out, he’ll look back on a long list of failed relationships, maybe even marriages, and realize his tendency to confuse love and lust was to blame. He may only truly fall in love later in life, when he makes this distinction.

Scorpio men can confuse their strong, intense, sexual desires for love. He may also confuse possessiveness and control for love. He’ll still use the word “love” to describe these feelings.

Pay attention to whether he still acts attracted to you when sex is not the center of the conversation. If you took a hiatus from sexual activity, is your Scorpio man still as invested in the relationship?

If so, there is a good chance he’s actually in love with you. Otherwise, he can confuse his infatuation or sexual attraction with love and deceive himself into thinking he’s in love when he is not.

He Falls in Love Instantly

Whatever his feelings are, he is intuitive. A Scorpio man knows instantly if he’s attracted to you or not. How does a Scorpio man act when he likes you? He becomes completely invested in learning more about you.

He may ask others about you or ask you questions directly. He’ll try to show off to get your attention. He’ll coincidentally show up wherever you plan to be because he’s been keeping tabs on you.

He will try to flex whatever skills he has to show you how powerful and in control he is. He may act indifferent to you emotionally, but he’ll spend a great deal of time showing up where you are to do so.

Scorpio men develop feelings in an instant. They don’t always know exactly what these feelings are, and this is why it can take so long for him to admit he loves you. He does believe in love at first sight and Soul Mates.

He has no problem accepting that fate has intervened and brought the two of you together. Sometimes, he’ll build up a love story in his mind to justify the instant connection he feels.