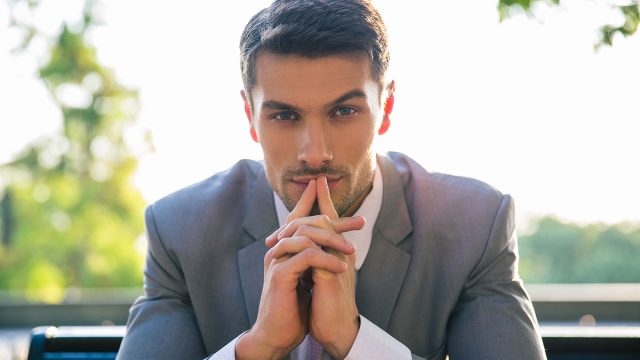 If you are dating a guy born under the sign of the scorpion, you may wonder if there are certain astrological influences that make a Scorpio man complicated.

Those born under the sign of Scorpio have some of the most intricate and impenetrable personalities, so it’s no wonder that you want to know what makes a Scorpio guy so complicated.

There are many astrological factors that make your Scorpio man so puzzling and hard to read.

When you learn more about his zodiac sign’s typical traits and characteristics, you will have a better understanding of what makes this mystifying sign so complex.

Every sign is governed by a heavenly body that tells us something significant about that sign’s values and personality traits.

Scorpio is one of the rare signs that have more than one ruling planet, which is part of what makes it such a complicated sign.

Being governed by the sign of power and transformation makes Scorpios very intense, while Mars makes them passionate and aggressive.

Just as every zodiac sign has a guiding heavenly body, each zodiac sign also belongs to one of four natural elements. The four elements in astrology are earth, fire, air, and water.

Scorpio, along with Cancer and Pisces, is a water sign. Water is perhaps the most powerful and complex of all the astrological elements.

Our planet is mostly covered in water and the human body is mainly composed of water. Just as the moon affects the ocean tides, as a water sign, Scorpios are particularly sensitive to planetary influences.

One of the reasons why Scorpios are so complex is that their emotions and personalities run as deep as the ocean.

Even when they seem calm and tranquil, there is always a world of activity going on below the surface.

Scorpios are sensitive and emotional, but they hate appearing vulnerable or weak.

Scorpios don’t mind when others show their feelings and they enjoy it when people are vulnerable with them, but they loathe appearing anything less than composed and powerful in public.

They work hard not to show it, but Scorpio men are sensitive and get their feelings hurt easily. A Scorpio man’s loved ones know how emotional he is, even when he can’t or won’t express it.

He feels his feelings profoundly and sometimes lashes out when he is in a bad mood. It’s important that those close to him accept his reactivity and anticipate his mood swings.

A Scorpio man always comes back to a woman who understands his sensitivity and is patient with his intense temper.

This combination of sensitivity and invulnerability makes Scorpio men very complicated and hard for most people to understand.

Scorpio is one of the most intuitive signs of the entire zodiac. They have excellent instincts and are great at reading people.

A Scorpio man’s natural intuition can make him seem almost psychic. He views life as a chess game, and he is always several moves ahead of everyone else.

It’s impossible to get anything past a Scorpio man, which makes him complicated and intimidating.

Because he is so skilled at reading people, a Scorpio guy is also a human lie detector. He can tell from facial expressions, vocal inflections, and his gut instincts when someone is deceiving him.

His abilities to understand people and predict the future make a Scorpio man seem mysterious and complex.

Although Scorpios are skilled at predicting the behavior of others, they aren’t predictable themselves. The only guarantee when it comes to Scorpio man’s actions is that he will always do what’s most advantageous for himself and his loved ones.

Scorpios can be complicated and hard to please because they have an innate need for power.

They don’t need everyone to recognize their authority or know they are in charge, but a Scorpio requires control to feel balanced and happy. When a Scorpio feels out of control, he becomes reckless and unstable.

If you want to know how to make a Scorpio man fall in love with you, you need to let him take control sometimes.

When your Scorpio guy wants to choose the restaurant for your date or pick what time you will meet, don’t argue with him unless you have a very strong preference.

His every move is careful and calculated, and he doesn’t make a single decision without having a list of reasons.

6. His Attitude Towards Sex

The body parts correlated with Scorpio are the reproductive system, the excretory system, and the genitals. This means that intimacy and having a healthy sex life are of the utmost importance to a Scorpio guy.

This doesn’t necessarily mean that Scorpios are promiscuous; if anything, their sensitivity makes sex a meaningful and intimate experience they won’t share with just anyone.

A Scorpio man might engage in the occasional one-night stand or fling, but what he really wants is a partner who knows his personality and body well enough to fulfill all of his sexual needs.

If you want to know how to get a Scorpio man to chase you, you need to match his libido and be experimental in bed.

His sexual desires are powerful and complex, so make sure you communicate with him about your sex life.

7. His Unforgiving and Vengeful Nature

Another aspect of his personality that makes a Scorpio man so complicated is his vengeful and unforgiving nature.

A Scorpio when hurt by someone holds a grudge against them forever. Not only does this spiteful sign never forgive, but Scorpios also never forget.

When you do something to betray or hurt a Scorpio man, he files it away in his mind as a mark on your permanent record.

Try never to cross your Scorpio guy, because the sharp sting of Scorpio revenge is not something you want to experience.

Part of what makes Scorpio men so mysterious and complex is that while they feel their emotions deeply, they don’t share their thoughts and feelings with many other people.

It takes a very special person to make a Scorpio man feel safe and comfortable enough to talk about his true feelings and opinions.

One of the signs that a Scorpio man has feelings for you is when he lets his guard down and opens up to you.

If he tells you his secrets and lets you into his heart, it’s an indicator that you have won over this complicated guy.

Scorpios are notoriously stubborn, which can make them seem complicated and difficult to anyone who disagrees with them.

If you are wondering how to make a Scorpio man chase you, avoid arguing with him. You will never win, anyway.

Scorpios are combative and never back down from a fight. They must always have the last word in an argument and aren’t afraid to fight dirty.

A Scorpio man is stubborn and unyielding, even when he knows he’s wrong. His strong opinions and bullishness are part of what makes his personality so convoluted.

Scorpio men are very protective of their loved ones, but because of their obsessiveness and need for control, their measures of protection can come off as overbearing.

For example, a Scorpio man might call you over and over again to check on you if he is worried about you, to the point that you have to turn off your phone.

But a Scorpio guy’s protective side only comes out for those he deeply cares about, and he has good intentions when he is being overly cautious.

If you want to know how to make a Scorpio man obsessed with you, show him that you appreciate his protective nature and don’t take it for granted.

A typical Scorpio male characteristic that makes him so complex is jealousy.

When a Scorpio man wants you, he wants you all to himself. This sign is notoriously jealous and won’t settle for a partner who is anything less than completely faithful and devoted.

Even in the early stages of dating a Scorpio man, you might notice some symptoms of his jealous nature.

If you mention your ex or any other man, watch how his eyes flash and his expression changes into a grimace.

A Scorpio man’s jealousy can be intense and difficult to handle. Don’t try to make this complicated, envious sign jealous, or he will make sure you regret it.

10 Signs a Scorpio Man is Serious About YouDo Scorpio Men Like to Cuddle?
Hello, I'm Liz