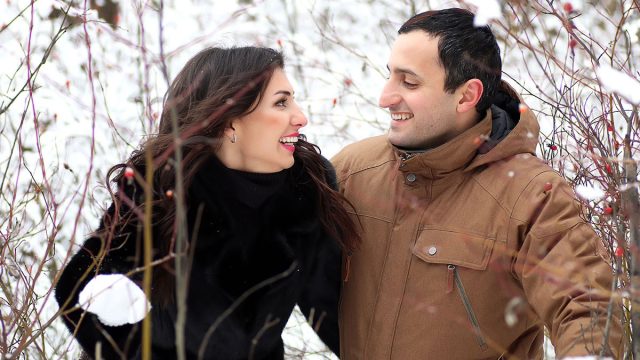 Scorpio man and Capricorn woman compatibility can be smooth if they can work through a few key differences.

This couple can have great compatibility both in friendship and romance, though business partnership brings out their best traits.

What does a Scorpio man like about a Capricorn woman? It turns out, there is plenty about this stable and productive personality that attracts a Scorpio man.

Though he is much more intense and emotional and she is aloof and practical, he sees this as his ideal complement. What attracts a Scorpio man to a Capricorn woman is her steadfastness.

Scorpio men can be full of drama but Capricorn women know how to cool him off. She can bring him back down to Earth when he gets into one of his moods.

A Scorpio man’s thoughts of a Capricorn woman can vary. As friends, he can find her to be grounded, stable, ambitious and secure and this makes him feel more confident in their bond.

He may also find her frustrating and confusing because she is one of the few people he can’t easily read. It shouldn’t be a mystery since she is forthright and direct. But a Scorpio man is baffled by her practical nature.

This intrigues him to want to figure her out as well. A Scorpio man will find a Capricorn woman to be an ideal friend. She doesn’t gossip or cause drama. She is honest and trustworthy. She’s also practical and nurturing.

He is likely to put his full trust in her. She can bring out his financially savvy nature and this pair, as friends, can be highly successful if they decide to go into business together. She works hard at everything, including understanding his needs.

She may be equally baffled by his intuitive, emotional and brooding nature. These traits are foreign to her but she is not likely to judge. She enjoys his company. He has a dark and edgy nature that is different to her.

A Capricorn woman may easily become friends with a Scorpio man because he brings a level of mystery and intensity into her life that she is not used to. This friendship can be long lasting and harmonious.

A Scorpio man and Capricorn woman can have a secure friendship even if it is a bit lackluster. He can be dramatic and emotional but she is cool and calculating. Both are highly intelligent and intellectual.

Capricorn women are connected to tradition and the past. This is interesting to a Scorpio man as he loves to delve deep beneath the surface and understand how things came to be the way they are. There is much this pair can teach each other as friends.

For a Scorpio man and Capricorn woman, intense relationships such as romance, can be difficult. This pair needs to have a firm foundation as friends first. Capricorn women are cautious by nature. He may perceive this as rejection or lack of interest.

Scorpio men are sensitive and easily hurt. Though he can have a sharp tongue when angry, a dismissive or curt statement from a Capricorn woman can devastate a Scorpio man. He may read many layers into her communication rather than taking it at face value.

Yet if this couple is able to work through their differences, they can foster a solid foundation and have a satisfying romantic relationship that lasts a long time. Both are serious about commitment.

Capricorn women are slow to commit because they want to make sure everything is perfect. Scorpio men are cautious and intuitive and will shy away from unstable relationships. When they both have a firm foundation, they can be set for life.

If you’re wondering how to make a Scorpio man obsessed with a Capricorn woman, it would behoove the Capricorn woman to not be too revealing. Though she is usually candid, it can be better to create an air of mystery.

This keeps a Scorpio man hooked and coming back for more. Capricorn women aren’t as emotionally demonstrative and this can either satisfy a Scorpio man or trigger his insecurities. Mostly, if he is already secure in himself, he won’t mind.

But an insecure or immature Scorpio man can become jealous and possessive of a Capricorn woman who is less openly expressive. He may constantly question her intentions and wonder where he stands.

A traditional Scorpio man and Capricorn woman couple can create the foundation for a solid, satisfying and sentimental marriage. Scorpio men can be romantic. Capricorn women aren’t overly emotional but they are sentimental.

She may dream of a traditional wedding and that suits him just fine. They will see a wedding as a tasteful ceremony to celebrate their love, but aren’t likely to go over the top.

To a Capricorn woman and Scorpio man, a marriage is more like a business partnership. In fact, once married this couple may even go into business together. This is one surefire way to keep the romance and practical aspects of the marriage passionate.

They love creating something worthwhile and practical together. They can also find it easier to make a commitment to marriage if both share a desire to have a family. This is especially true for a Capricorn woman.

When a Scorpio man and Capricorn woman fight, it can be like a smoldering storm. Scorpio is passive aggressive and will try to keep his anger simmering at first. Capricorn women don’t like to make a scene.

Both will stifle their anger for as long as they can. But if the problems aren’t resolved, explosions can ensue. This often ends up happening because neither wants to directly address their grievances at first.

When they are invested in a marriage, neither will want to end the relationship no matter what troubles may arise. They are both stubborn and value their financial and energetic investments. Even if things fall apart, they may stay married to keep up appearances.

Sometimes this couple will even remain together out of spite. A Capricorn woman hurt by a Scorpio man won’t leave because she won’t give him the satisfaction of getting to start over, for example.

They can work through their troubles and difficulties as well and keep a solid bond because they both understand the value of commitment. They both also care about their reputations and won’t want to be associated with drama and failure.

A Scorpio obsessed with Capricorn will make the marriage work because he doesn’t want to lose the love of his life. She will easily work out troubles because she would rather be productive than waste her time being unhappily married.

Though they can be great friends, lovers and married partners, in a strictly sexual relationship, this couple will likely crash and burn without some other common agenda. Capricorn women can be sensual and seductive but they are ambitious and concerned about their work more than about life’s pleasures.

Scorpio men understand this, yet they are highly sexually charged. In a marriage, this couple can have a lukewarm sex life. He may accept this if he truly loves her or he may seek satisfaction outside the marriage and try to hide it from her.

A Capricorn woman is likely to be so busy working she may not catch on to his antics at first. A much older Scorpio man may have cooled off enough to adjust to the slower pace of a Capricorn woman’s libido and so this couple, as a romantic or married pair, may have a satisfying sex life.

Yet Capricorn women are obsessed with tradition and don’t like to try new things. This feels stifling and frustrating to a Scorpio man. He needs to explore and test the boundaries. An exceptionally sexually adventurous Capricorn woman may be able to fully satisfy the desires of a Scorpio man.

Though it is likely one part of this pair will find their sex life unfulfilling, dull or too intense. As a purely sexual relationship with no strings attached, they may capture each other’s attention at first, but it is unlikely the affair will last long. He will become too demanding. She will likely cool off.

This couple’s best bet for a satisfying sex life is to connect their sexual interests with some other interest such as starting a family or becoming aroused by success in their shared business. Otherwise, the passions will burn out quickly for a Scorpio man and Capricorn woman.

What is The Weakness of Scorpio Men?How You Can Attract a Scorpio Man at Work
Hello, I'm Liz