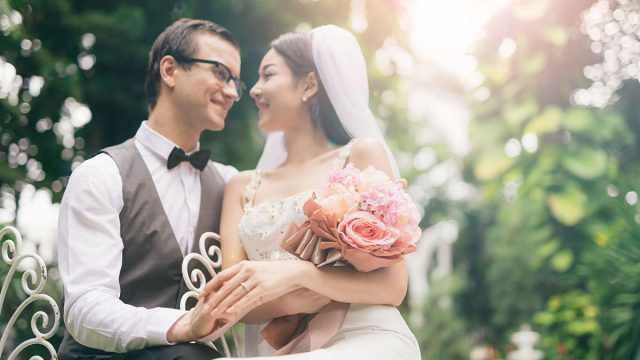 If you belong to one of these signs or know a couple that does, you might want to know about the typical Scorpio man Cancer woman marriage compatibility.

Is this union destined for success, or is it doomed to failure?

Scorpio and Cancer are one of the best matches of the entire zodiac, and few signs could rival their compatibility.

There are several aspects that make a marriage between a Scorpio man and a Cancer woman highly likely to succeed.

When you analyze the astrological forces behind both of these signs, you will be able to recognize what makes a Scorpio man and a Cancer woman‘s marriage work.

Some married partners know each other for years before ever becoming a romantic couple, but with a Cancer woman and a Scorpio man, love at first sight is likely.

The Scorpio and Cancer magnetism is due to their zodiac signs’ shared element. Each sign belongs to one of the four elements of nature: water, fire, earth, or air.

The natural elements tell us about the personalities of the signs, as well as how they interact with the rest of the zodiac.

Two astrological signs with the same element tend to be more compatible because they have similar personalities and communication styles.

Cancer and Scorpio are both water signs, making them innately compatible. They experience and express their emotions the same way.

A Cancer woman and a Scorpio man are both highly sensitive, so they get their feelings hurt easily, attach sentiment to possessions, and are empathetic to others.

They use a lot of non-verbal communication because they are intuitive enough to know what other people, especially their loved ones, are thinking without them having to say anything.

Since they both understand what it’s like to be so sensitive, a Scorpio guy and his Cancer spouse will work equally hard to cultivate a nurturing environment for one another.

Besides correlating with a natural element, every sign of the zodiac also has a guiding celestial body that reveals something significant.

It’s important to consider their ruling planets when we want to predict the marriage compatibility of two signs.

The Cancer and Scorpio chemistry can be explained by their planetary influences. Scorpio is primarily ruled by Pluto, the planet of power, transformation, life, death, and obsession.

While most signs have only one guiding heavenly body, Scorpio is also ruled, to a lesser extent, by Mars, the planet of aggression, drive, and masculinity.

Cancer, on the other hand, is governed by the moon. The moon represents femininity, motherhood, children, and moods.

Guided by the planets of masculinity and femininity, Scorpio and Cancer complement one another perfectly.

Their planets also reveal that, for Scorpio and Cancer, love making is an art form and a method of self-expression. Even when a Scorpio and a Cancer are mad at each other, they find ways to be intimate.

The mysterious Cancer lady uses sex as a way to communicate her emotions, while a Scorpio guy finds sex to be a satisfactory outlet for tension.

When Cancer and Scorpio fight, the Scorpio spouse may take his aggression out in the bedroom, while the Cancer woman soothes him and makes him feel close to her even though they are arguing.

Their guiding heavenly bodies tell us that Scorpio and Cancer make a powerful married couple, especially as parents, and they are highly sexually compatible.

Each sign has one of three modalities: cardinal, fixed, or mutable. A sign’s modality reveals how that sign works through problems and interacts with their surroundings.

Two signs with different modalities tend to make a stronger couple because as a couple, they possess multiple methods of handling issues and facing difficulties.

Scorpio is a fixed sign, and fixed signs are typically stubborn and slow to act. They think and research before tackling any problems, and they are better at seeing a project through to the end than starting it.

Cancer is a cardinal sign, and cardinal signs are the initiators of the zodiac. They attack problems directly, and they’re more skilled at getting started than finishing jobs.

Their different modalities make Cancer and Scorpio compatible in a marriage because the Cancer woman will take the lead when it comes to addressing issues and beginning projects, while the Scorpio spouse helps her be methodical and finish them.

One of the reasons that the Cancer and Scorpio attraction is so strong and stands the test of time is that these two signs have similar values.

We can determine the personal values and priorities of the signs by looking at their astrological houses.

Each sign rules a particular house of the zodiac. Cancer is the head of the fourth house, while Scorpio rules the eighth.

The fourth house represents the home, family, children, and motherhood. This tells us that a Cancer woman is very maternal and yearns for a family of her own more than anything else.

Her guiding celestial body, the moon, also represents many of these same values, strengthening her priorities.

The eighth house, Scorpio’s house, represents merging, sex, intimacy, and sharing resources. This means that a Scorpio guy wants to settle down with a partner and create a life together.

Their shared values and similar goals in life will have a Scorpio man obsessed with a Cancer woman quickly, and their bond will never fade.

Every sign has a spiritual age determined by the order of the zodiac. A sign’s age conveys the maturity of that sign’s soul.

Cancer is one of the youngest signs, giving a Cancer woman a childlike sense of wonder and excitement. She may lack emotional regulation and self-control.

Scorpio is among the adolescent or young adult signs, which means that a Scorpio guy comes off as more mature than a Cancer woman and he is very concerned with worldly things and interpersonal relationships.

The Cancer woman’s youthfulness invigorates a Scorpio guy and helps him see the world more optimistically, while a Scorpio man’s maturity makes a Cancer woman focus on her goals.

Each astrological sign has a unique symbol, often an animal, that represents the distinctive personality traits of that sign.

The zodiac symbols can help us predict marriage compatibility by observing how these animals interact in the wild.

Cancer is symbolized by the crab, while Scorpio’s symbol is the scorpion. These two creatures are quite similar in many ways, lending to the compatibility of their signs.

Both the crab and the scorpion are small and fragile, yet powerful and surprisingly strong.

The crab carries a hard shell on its back everywhere it goes for protection, and also has menacing claws to pinch enemies.

The scorpion may be tiny, but one sting from this minuscule creature can injure or even kill a much larger beast.

These symbols and the zodiac signs they represent work extraordinarily well together and are just another indicator of the power of a Cancer-Scorpio marriage.

Even the most incompatible zodiac signs have some strengths as a couple, and there are innumerable strengths to a Scorpio-Cancer marriage.

They have such similar mindsets and emotional responses that it will often feel as though they can read one another’s minds. This is the type of couple that finishes each other’s sentences.

A Cancer woman knows just how to make a Scorpio man jealous or hurt his feelings, but she would never want to cause him any pain.

The Scorpio guy is equally understanding and protective of his Cancer lady, and he knows how to treat her right and make her feel like a queen.

Sexually, mentally, and emotionally, a Scorpio man and a Cancer woman are in sync. They are perfectly compatible in nearly every way.

There are almost no weaknesses in a marriage between a Cancer woman and a Scorpio man, but every union has certain flaws.

Because these two astrological signs are so alike, a Cancer-Scorpio marriage may suffer from a lack of balance.

Both of these signs can be highly emotional, sensitive, and stubborn. They are prone to mood swings, and they have a hard time admitting their faults.

They will have to make a conscious effort to stay grounded and optimistic since they are both quite dreamy and tend to be a bit negative.

A Scorpio guy and a Cancer lady are so well-suited for one another that their marriage is a match made in heaven.

Every astrological influence, from their signs’ natural element to their guiding planets, indicates that these two signs should have an instant and lasting connection that stands the test of time.

They are so perfectly compatible that, unless they are already attached to other romantic partners, these two signs won’t be satisfied with anything less than a permanent relationship.

If they are just friends or coworkers, they are likely to take their relationship to the next level. After they start dating, it will surprise no one when this couple wants to get married.

A Scorpio man and Cancer woman break up is rare and unlikely. Once these two zodiac signs get together, they probably won’t separate.