8 Important Signs a Sagittarius Man is Not Interested in You 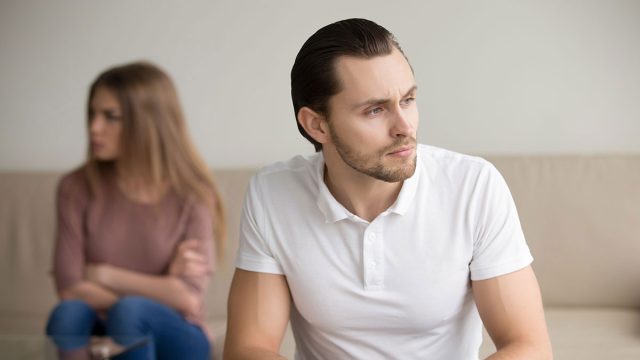 If you like a Sagittarius guy and aren’t sure how he feels about you, you need to know the signs a Sagittarius man is not interested in you.

How does he show that he doesn’t have romantic feelings for you?

Sagittarius is a very warm, friendly, and flirtatious zodiac sign, so it’s no wonder you might be having a hard time figuring out his intentions.

Is he just being friendly, trying to date you, or is he not interested in you at all?

By learning more about his zodiac sign’s typical personality traits and behaviors, you will be able to recognize the signs a Sagittarius man is not interested in you.

Sagittarius is a very bold and confident sign, so a Sagittarius man isn’t the type to ignore a woman when he’s interested in her.

Some zodiac signs like to play hard to get, or they are too shy to approach the person they are attracted to, but not a Sagittarius.

If he likes you, he will make it clear by coming up to you and starting a conversation. If you’re in a group setting, he will listen when you speak and laugh at your jokes.

But when a Sagittarius man ignores you, it means that he’s not interested in you romantically. He’s an easy-going and fun-loving guy, so he’s probably not trying to be rude or malicious.

He tends to interrupt and talk over people, so don’t be offended if he cuts you off when you’re speaking because he does this to all of his friends.

He just gets so excited and enthusiastic about the conversation that he has a hard time waiting for his turn to talk.

But if he deliberately ignores you when you speak directly to him and avoids crossing your path, it means a Sagittarius guy dislikes you.

2. He Never Spends Time With You

A Sagittarius man is very social and outgoing, so he likes to pack his schedule with lots of plans and activities.

He doesn’t have a lot of free time, so if he clears his schedule to spend time alone with you, it’s one of the signs a Sagittarius man has feelings for you.

If he’s interested in you as a friend or maybe even romantically, he will invite you to join him on his social outings with friends to get to know you better in a group setting.

But when a Sagittarius man is not interested in you, he will always be too busy to hang out and he won’t extend invitations to accompany him anywhere.

If a Sagittarius guy likes you, he will go out of his way to spend one-on-one time with you, or at least bring you along when he hangs out with his friends.

If he constantly blows you off and refuses to make plans with you, it means he doesn’t like you very much.

3. He Calls You Boring

One of the reasons a Sagittarius man is so social and friendly is that he likes meeting new people and learning new things. He is very intellectually curious, and he likes surrounding himself with exciting, interesting people.

If he tells you that you’re fascinating and asks you about your opinions, it’s one of the signs a Sagittarius has a crush on you.

He gets bored easily and craves variety, so any woman he dates has to be intriguing and know how to keep him on his toes.

But if a Sagittarius man calls you boring or looks disinterested when you speak, it means he’s not that into you.

If he yawns or checks his watch or phone during your conversations, it means he doesn’t find you interesting and he’d rather be talking to someone else.

Here is the secret language of Sagittarius men to make him love you forever.

Most Sagittarius men are extroverts, so they get their energy from being around other people. The Sagittarius motto is, “the more the merrier.”

The typical Sagittarius man’s personality is very warm and welcoming, and he tries to make everyone feel included and part of the group.

If he likes you or considers you a friend, he will draw you into conversations, introduce you to people, and make sure that you always have a full drink in your hand.

He is a good host because he wants everyone to get along and have a good time, and he knows how to bring people together.

But if a Sagittarius man doesn’t care about you or dislikes you, he will exclude you. Most of the time, he excludes you accidentally because he’s too focused on his loved ones to worry about you.

But if he intentionally excludes you by disinviting you, turning his back to you, or leaving places when you show up, it means he doesn’t like you at all.

Although Sagittarius is a warm and friendly zodiac sign, sometimes a Sagittarius guy can be quite rude.

He usually doesn’t mean to be rude or hurtful, but he has no filter and always blurts out the first thing that pops into his head without thinking.

He’s very open and honest, sometimes to a fault. If he doesn’t like your outfit or thinks you’re boring, he might shout it out before he can stop himself.

If a Sagittarius man puts his foot in his mouth and gets embarrassed for saying the wrong thing, it doesn’t mean he dislikes you.

But if he is intentionally rude and unkind to you, it’s one of the signs a Sagittarius man doesn’t like you.

He rarely tries to hurt someone’s feelings, and if he realizes he has said the wrong thing, he will apologize.

But if he makes hurtful comments or behaves rudely towards you and is unapologetic, it means he’s not interested in you.

This shocking video will show you 3 ways to tell if your Sagittarius man secretly wants you back.

6. He Doesn’t Introduce You to His Friends

Because he’s such a social and outgoing guy, a Sagittarius man’s friends are important to him. He spends a lot of time with them, and their opinions matter to him.

A Sagittarius man in love will want to show his partner off to his friends and try to integrate her into his circle.

He will be excited to introduce the woman he likes to his friends to brag about what a catch she is and find out what they think of her.

But if you’re wondering how to know if a Sagittarius man is playing you or doesn’t like you, he won’t let you meet his friends.

He will only hang out with you alone and he will balk at the idea of bringing you along to events where his friends and family will be.

If he hides you and is reluctant to introduce you to the important people in his life, it means your Sagittarius guy is not into you.

7. He Doesn’t Notice You

Sometimes, a Sagittarius man might come off as rude because he ignores people accidentally.

He is a loud, flashy guy, and it’s hard to match his vibrant energy. If you’re a quiet wallflower, a Sagittarius man might not notice you and it will feel like he’s excluding you.

He’s most likely not doing it on purpose. He’s drawn to a strong, confident woman who can be the life of the party like he is, and he can’t always pay attention to every single person in the room.

If you want to know how to make a Sagittarius man chase you, you’ve got to get his attention first.

He likes an interesting, brave woman, so don’t be afraid to make a bold move and draw attention to yourself if you want a Sagittarius guy to like you.

Get on stage and perform a song if you’re at karaoke night with a Sagittarius guy, or approach him with a drink and ask him to do a duet with you.

If you’re at a party or a bar, walk up to him boldly and introduce yourself, then start flirting with him and ask him to dance with you.

A Sagittarius guy isn’t afraid to make the first move, but he won’t do it if he doesn’t notice you. Get him to pay attention to you first before you decide whether or not he likes you.

Sagittarius is not the most reliable sign of the zodiac. A Sagittarius guy is always busy socializing or working on a project, and he’s not one to constantly check his phone or social media.

But if a Sagittarius man likes you, he will find the time to return your calls and respond to your messages. It might not happen right away, but he will reach out to you.

When a Sagittarius man is losing interest, his calls and texts will become less and less frequent until they stop completely.

If he never gets in touch with you, don’t convince yourself that your Sagittarius man is just too busy. He can find a few seconds to type out a text message, no matter how hectic his day is.

If he likes you, he will find a way to connect with you, and if he doesn’t, then he’s just not that into you.