Sagittarius Man in Marriage: What Kind of Husband is He? 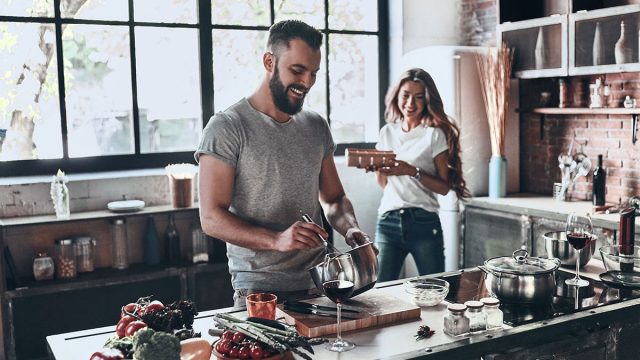 For a Sagittarius man, marriage isn’t something he comes by easily. On the contrary, this is a man who is afraid of commitment.

When he does commit to a relationship and settle down, there are plenty of things to love about being married to him.

Once you’ve married a Sagittarius man, don’t expect him to be any less free than he was before.

Being free-spirited and independent is a huge part of Sagittarius’ personality.

This is something you’ll need to understand if you want the relationship to last.

Being married to a Sagittarius can be very exciting, of course.

This is an adventurous man, and he’ll want to take you along on some of those adventures.

A Sagittarius man is generous as well. He’ll shower you with gifts and compliments to show that he cares.

A Sagittarius man in love is not the type of person to be possessive or jealous. On the contrary, because he values his own freedom, he thinks you should have the same freedom.

This doesn’t mean that he would be okay if you cheated on him or that he doesn’t care at all if you flirt with other men. It just means that he trusts your judgment and won’t feel insecure if you talk to others.

This is the type of man who might also be alright with an open marriage. Obviously, it’s not for everyone, but a Sagittarius man is more likely to be open to the idea than other signs.

Sagittarius men like to see the best in every situation. They trust that things will work out for them in the end, even if it doesn’t always seem like it.

Sagittarius has big dreams. He wants to be successful in life to have the freedom to go where he wants when he wants to. In addition, he wants to be generous with his loved ones without worrying about money.

He believes that things are attainable and that he’ll achieve his goals. Of course, there might be bumps in the road at times, but those won’t stop him.

He’s optimistic in his relationships too, to a fault at times. If you two argue, he might not actually apologize for it. He believes you’ll just forgive him, and things will work out.

How do Sagittarius men act when in love? He can be very romantic when he wants to be.

He’ll be very generous with his love. He’ll use his words by complimenting you and outright saying he loves you. He’ll be physically affectionate as well. He’s not afraid of expressing how much he cares.

He’ll make big romantic gestures at times. He might whisk you off on a romantic weekend for your anniversary. He’ll buy you expensive gifts if he can afford them.

When he proposed before you got married, this was likely a large event as well.

When a Sagittarius man is in love, his behavior doesn’t really change much. He’s still an adventurous and free-spirited person.

If you are also adventurous, the two of you are likely to have a stronger marriage. A Sagittarius man wants a partner who values freedom as much as he does.

A Sagittarius man’s attraction to others is often based on how independent they are.

This adventurous nature makes being married to a Sagittarius exciting. The two of you are likely to be trying new things and going to new places constantly.

A Sagittarius man is adventurous in bed as well. He’ll be down for almost anything you want to try. He’ll have plenty of suggestions for ways to spice up your love life as well.

For a Sagittarius man, commitment can be difficult. He’s a free spirit and doesn’t like to feel tied down. This can make getting married in the first place difficult.

Even once he does commit to somebody enough to marry them, that desire to be free is still there. He doesn’t want to feel like you’re controlling him or like you’re keeping him from doing the things he wants to do.

If you want a marriage with a Sagittarius man to last, you need to understand this need for freedom. If he feels stifled, he’s likely to hit the road.

A Sagittarius man cheating definitely isn’t unheard of. This is a possibility if he feels trapped or tied down in a relationship. To avoid this, make sure he still has the freedom to be himself and go on adventures.

Sagittarius men don’t like to wait for what they want. This is a man who can be impulsive and who enjoys instant gratification.

He may have ended past relationships because the other person didn’t know what they wanted, and he wasn’t willing to wait around for them to figure it out.

When he makes his mind up about something, he expects everyone around him to as well.

It won’t matter if you’re not ready to make a decision about something. If he’s ready, he’s making the decision.

This means he doesn’t always make the best decisions. He doesn’t spend too long thinking things over. He just acts.

Domestic chores are just not important to a Sagittarius man. He’s not likely to be home that often, so why would he care how clean it is?

When a Sagittarius man ignores you and your requests for help around the house, it’s because he honestly doesn’t care how the house looks.

As long as you’re both happy and having a good time, he couldn’t care less about tidiness.

He doesn’t expect you to keep things clean, either. If there is laundry on the floor or dishes in the sink, he’s not going to be mad about it. He’ll simply ignore the mess in favor of doing something he enjoys doing.

One of the ways a Sagittarius man expresses his love is through surprises. Sometimes these are grand gestures, but he’s the kind of person who likes to give little surprises every day.

He is a generous person. When he has money, he wants to share it with those around him.

He’ll send you flowers and get you coffee just because. He’ll plan a surprise trip for your birthday. If he sees a dress he thinks you’ll like, he’ll buy it for you.

The surprises aren’t always material goods. For example, he might surprise you by suddenly trying something new in bed or by having dinner ready when you get home from work.

If you don’t like surprises or don’t want him buying you things all the time, just remember that this is one of the ways he shows he cares.

Sagittarius isn’t the kind of person who stays in one place for long. So even if he “settles down” with you, he’s not going to be home all the time.

He may have a job that requires frequent travel. But, even if he doesn’t, he’s likely to be often traveling anyway. Sometimes he’ll take you with him, but this won’t always be the case.

For some people, this is ideal! Not everyone likes to be with their partner 24/7. It’s nice to have some time to yourself. It’s great to be able to spend time with others without worrying about your partner feeling left out.

Other people might feel lonely with their Sagittarius partner being on the move constantly. But, again, this is something to take into consideration before committing to a relationship.

If a Sagittarius man is acting distant, it may be because he’s been in the same place too long. He’s bored.

You never have to wonder how a Sagittarius feels about something. This is a man who is straightforward, blunt, and direct.

This can be a good or bad thing, depending on how you look at it. You don’t have to worry about him lying to spare your feelings. He’s going to tell you how he actually feels.

He won’t say things just to impress you or make you think highly of him. He’s a genuine person, and if he tells you something, you can trust that it’s true.

On the other hand, you need to be careful when asking for his opinion. He’s not going to spare your feelings or sugarcoat things one bit.

This doesn’t mean that he’s mean or cruel. He just doesn’t see the point in lying or bending the truth, especially if he’s been asked for his opinion.