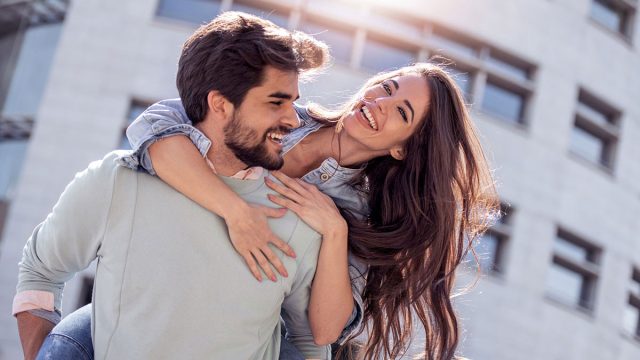 A Sagittarius man and Gemini woman’s compatibility is among the best for both signs. Their zodiac signs’ personalities complement each other perfectly.

They have similar drives but are different enough to excite each other. They’ll never tire of each other.

This pair can become fast friends. They’ll notice each other even in a crowded room. Both are instantly drawn together. Their magnetic attraction lasts in love as well.

Both are highly imaginative and creative. A Sagittarius man is passionate where she is intellectual, witty, and playful. Both love travel and adventure. They make an optimistic and encouraging pair.

A Sagittarius man and a Gemini woman are soulmates. They’ll sense the strong connection, and their bond is hard to explain. They’ll feel like they’ve known each other in other lifetimes.

There are many opportunities for a Sagittarius man to meet a Gemini woman. They are both outgoing and enjoy similar venues like parties, concerts, festivals, and networking events. Both are often surrounded by friends and admirers at social gatherings.

When he sees her for the first time, he’ll notice her charm and sense of humor. He’s a seeker of knowledge and will naturally be drawn to her because she’s always dispensing trivia. He’ll add perspective based on his travels.

Their friendship may begin through a random encounter, or they may meet at work as they are drawn to similar career fields like academic institutions or libraries. They may enjoy friendly competition at a local bar’s trivia night.

Once they start talking to each other, they won’t want to stop. They instantly inspire each other. She’ll likely speak many languages, and this will get him chatting about all the places he’s traveled to. She’ll find his courage fascinating.

Both are intellectual peers, and they appreciate each other’s intelligence since not many people can match their intellect. Men born under the Sagittarius horoscope sign are independent and idealistic. Gemini women are capricious but appreciate Sagittarius’ determination and moral compass.

To a Gemini woman and a Sagittarius man, experience is more important than material wealth. Both invest their time and money in education, travel, and opportunities to do memorable things. Even if their interests differ, they’ll love to share adventures.

This pair will seldom quarrel. She’s diplomatic, and his jovial nature ensures they’re usually friendly toward each other. If they ever disagree, it’s because he’s being judgmental of her for not sharing an ethical ideal that is important to him.

Examples of Gemini woman and Sagittarius man as famous couples abound. This pair is highly compatible. They may start out as friends first and eventually pursue romance after some time. Both are independent and seldom jump right into a relationship.

How can a Gemini woman attract a Sagittarius man? She doesn’t need to go out of her way to do anything special. He’s attracted to her because of her intelligent, independent, and playful nature. Though she should avoid chasing him.

If there’s one thing that scares a Sagittarius man away, it’s being pursued. Even if he is falling in love, he needs plenty of freedom and breathing room. His staunch independence is one of the most infamous and frustrating Sagittarius traits.

Both partners need to take it slow when they are forming a romantic relationship. This isn’t too hard for a Gemini woman. She’s independent and though she loves to act in tandem with a partner, she doesn’t like being confined.

Gemini women start to panic when a relationship becomes too serious. Ironically, even if it’s a relationship they want, they’ll sabotage it when things are going too well. They crave connection but fear emotion. This isn’t a problem with Sagittarius.

Sagittarius men know how to keep a distance in relationships. This frustrates most other women but will be fine with a Gemini woman. It prevents her from feeling overcrowded in the relationship. Neither becomes insecure when the other needs space.

Ideal Gemini dates involve going to concerts, movies, and trendy restaurants. Attending lectures, or book signings are also on her list of fun nights out. For Sagittarius, dates involving large gatherings, intellectual interests, or exposure to different cultures are preferred.

This pair may also travel together and take frequent day trips or weekend vacations. They never run out of ideas for things to do together. They also don’t always have to be together. Both are fine with long-distance relationships.

Neither is emotionally needy. If he checks in regularly, a Gemini woman will trust him. He’s often honest to a fault, she has no reason to doubt him. She can be placating, and her indirect communication style can irritate him.

Yet even this issue won’t lead them to quarrel often. He may encourage her to be more direct. If she feels comfortable with him, she’ll take his lead and become more assertive. Neither is jealous of the other’s social network.

If there is a crucial flaw that both need to overcome in order for the relationship to succeed, it is timing. Both procrastinate when making a commitment. But eventually, she will usually want to get serious before he is ready.

Gemini women are indecisive, but when their minds are made up, they’re impatient. Sagittarius men hang on to the single life for as long as possible. When they shift from casual dating to serious romance, the timing must be right.

If she tries to manipulate him into making a commitment, a Sagittarius man will turn his back on the relationship. No matter how strong his feelings are, he won’t be controlled. She can push too hard and undermine the relationship.

Yet if she has faith in him and gives the relationship time to grow, she will usually be pleasantly surprised. At some point, he will inevitably decide to move to the next phase and their relationship will blossom.

This pair may enjoy a long and adventurous courtship before deciding to marry. They may also never officially marry but simply decide to live together in a long-term relationship. Both can be unconventional and adaptable.

If they marry, it will be an unusual event. They may play it up with a grand ceremony or marry in an exotic location. They may be impulsive, eloping in secret. They’ll keep their relationship lively, even in marriage.

Their relationship is marked by surprises and spontaneity. This pair will never act like a settled couple. They won’t live up to others’ expectations in marriage. Even after years of marriage, they’ll still go on dates and act like newlyweds.

This is why they’ll succeed. Both get bored easily, so they are committed to maintaining a playful connection. If they are forced to deal with something serious, like a health crisis, they’ll struggle. Neither is good at taking responsibility.

But even in the face of a serious crisis, both will usually do everything possible to remain optimistic and nurture their bond. They bring out the best in each other and encourage each other to reach for the stars.

Neither cares about practical matters. This can cause problems financially for this couple, but neither is likely to be concerned about finances. As long as they can find ways to live life to the fullest, they will be happy.

If they have children, theirs will be an even more exciting and lively household. They’re always on the move and having kids doesn’t slow them down. They’re likely to get involved with a number of organizations and clubs.

They’re loyal to each other and he can be protective over their family. They may spend more time traveling together than at home, but neither feels frazzled by their steadily active lifestyle. They both thrive on change.

With chemistry as great as theirs, it goes without saying that a Gemini and Sagittarius sexually excite each other. They can share a thrilling and passionate sexual connection. Both enjoy learning new ways to please the other.

If they aren’t romantically involved, they can enjoy a friends with benefits relationship. It takes a long time for either of them to develop feelings for the other, so neither is likely to get too attached.

Even in romance or in marriage, this couple will instinctively know how to turn each other on. He understands her need for visual stimulation and knows how to play to her imagination. She understands his need for excitement and variety.

Both are curious about exploring taboo fetishes and may open each other’s eyes to new techniques and kinky things. She’s likely to dream up new ways to explore their sexual connection. He’s courageous and bold enough to initiate sexual games.

Their shared playfulness and willingness to experiment will ensure they never get bored with each other. She’s flexible and impressionable, so if he suggests something new, she’s usually interested in trying anything at least once.

They may not have the same desires, but their shared love of experimentation can ensure this pair enjoys a long-lasting sexual connection. Their sex life can enhance an already strong romantic relationship.