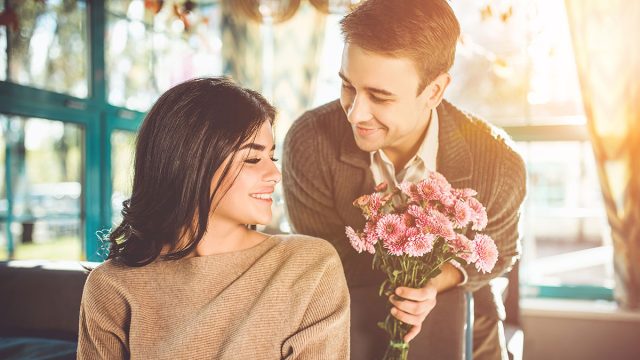 If a romantic Leo man is what you desire, you may be in luck. It’s easy to find a Leo man with a strong of sense of romance.

Leo men can be romantic as long as you don’t tread on their independent nature.

When you understand what a Leo man looks for in a woman, you can easily bring out the romantic nature of your Leo love interest. He won’t show his romantic side to just anyone, however.

When you can see the signs a Leo man is falling in love with you, you can rest assured you’ll see his romantic nature. He may conceal it at first as he doesn’t want to seem vulnerable.

Yet Leo men can be romantic. The key is to give him long enough to reveal this side of his nature. He won’t show his romantic side early in the relationship.

How does a Leo man show interest in a woman? The first thing you’ll see when a Leo man is interested in you, is that he’s got a strong, willful and passionate nature. A Leo man can become intensely romantic when he’s serious about you.

When you see a Leo man putting all of his passionate energy into pursuing you, you can be sure he’s in love with you. When a Leo man says “I love you,” you can take his word for it. He doesn’t say this lightly.

Leo men can be intense and passionate. They will either profess their love and show their romantic inclinations after a few months of dating, or they will wait longer to be sure you are the ideal partner. Yet once he’s convinced, a Leo man will show his love in generous ways.

He will go overboard showing you that you are the woman of his dreams. He may fall head over heels in love and his passions will be evident. He may be jealous one moment and act completely devoted to you the next moment. This is part of his style when it comes to showing romantic tendencies.

A Leo man in love will do just about anything for you. But there is one thing he won’t do, and that is to give up his independence. If you can accept him as he is, you’ll be rewarded with plenty of romance and attention.

Yet this means that you have to give him lots of breathing room. Nothing will undermine a Leo man’s independence, not even love. He may be romantic and affectionate, but he won’t give up his dreams for you.

If you try to fence him in or confine him in any way, a Leo man will become distant. He won’t back down from his dreams and ambition. Not even out of love for you. A Leo man needs to be true to himself and no matter how in love he is with you, his romantic side won’t supersede his need for autonomy.

When a Leo man is done with you, he’ll make it clear. He won’t spend any of his time or attention focusing on you. He may even block you or completely shut you out of his life. Yet when he loves you, he’ll make that clear as well. He can be romantic but will wait until the time is right to show you.

He has a sentimental side and he will allow himself to become vulnerable when he is really into you. When a Leo man feel secure in the relationship, he will open up and show you his romantic side.

He’ll wax nostalgic in order to connect with you and reminisce about your first dates together. He’ll show more of his emotional nature by tearing up at romantic movies or plays. He’ll let you peer past his bravado and façade of strength, showing you his sentimental and soft side.

He Sees Romance as a Quest

A Leo man’s love language is instinctive and intense. He uses acts of chivalry and courage to show his love for you. He won’t be as verbally expressive as you may prefer, yet his romantic tendencies are revealed in his willingness to go to bat for you.

If you give your Leo love interest a quest, literal or proverbial, he will set about following the mission you send him on. To a Leo man, life is a matter of chivalry and adventure. He sees himself as the King of his castle, but in love he is a Knight in search of damsels in distress.

He sees himself as a hero and so his idea of romance is less about words of love and more about doing things to relieve you of pain, suffering and inconvenience. He may drive you to work when your car breaks down, for example. He may also give advice even if you didn’t ask for it.

A Leo man’s negative traits easily get attention. He can be grandiose, selfish and hot-tempered. Yet when it comes to romance and love, a Leo man has many desirable traits to make up for his shortcomings.

He can be one of the most loyal and devoted of all the signs of the zodiac. He gives his word as if it were a sacred oath and he’s not likely to back down after he makes a promise.

A Leo man will show you the best of his talents, strength, courage and capabilities when he is in love with you. His romantic side encompasses some of his best attributes. He can be honest to a fault but will never deceive or disappoint you.

How does a Leo man test a woman? He may hold back and not fully expose his romantic side until he’s convinced himself he can trust you. He’ll test you by running hot and cold or going quiet suddenly.

When he does this, a Leo man is waiting to see how you will respond. If you panic and act clingy, he will shut down permanently. He won’t take a chance on a woman who may stifle his independence.

Yet if you pass his tests, a Leo man will start to open up and show you his romantic nature. He is selectively romantic. He needs to feel like he’s free to be his own person, yet if he judges the relationship to have long term potential, he can turn into a completely hopeless romantic.

An important lesson to keep in mind when it comes to a Leo man is that he never wants to be considered vulnerable. When a Leo man starts to notice the signs he is falling in love with you, he may panic. If this happens, he will start to pull back.

If you play it cool and remain independent but also show interest in him, he will eventually come back around. Leo men don’t want to feel like they are losing control of their emotions. He knows that falling in love makes him susceptible to this.

He doesn’t want to appear weak or out of control and so he will try to downplay his feelings for you at first. If you are patient and continue to show interest, eventually a Leo man will open up and show you a much more sensitive and romantic side of himself.

Just because a Leo man can be romantic, doesn’t mean he will articulate his feelings in the way you may expect him to. Rather than focusing on verbal communication, be open to the ways a Leo man will show you his romantic interest through his actions.

If you see the signs a Leo man has a crush on you, you may expect him to be romantic in the same way that you are. You may be surprised or even disappointed to learn that his style of romance is different.

Even in an attempt to be romantic, Leo men can be materialistic. This can include a possessive streak, in which being controlling and over protective can be part of how he shows his romantic interest.

He may also try to use gifts and expensive dates to show you his romantic side. If you don’t recognize his pattern of investing in grandiose dates and expensive gifts as a sign of romance, you may miss the opportunity to forge a stronger emotional connection with a Leo man.

Actions speak louder than words for a Leo man. The most simple sign that he’s in love with you are evident when you watch him to see if he acts romantic. Leo men can be creative, yet more often than not, when he’s in love, he’ll emulate romantic gestures seen elsewhere.

Whether he re-enacts scenes from romantic movies or takes suggestions and tips from romantic blogs or advice articles, a Leo man will use gestures of love and affection to make his feelings clear.

Still, he may not come right out and express his expectations and feelings verbally. Try not to get stumped on this peculiarity. If he is acting in a romantic and chivalrous way toward you, you can rest assured he is really interested in you.

Leo men are susceptible to falling for love stories, movies, plays and music. As a natural born patron of the arts and humanities, Leo men can quote romantic poetry and literature. They can sing romantic show tunes and imitate their favorite love songs.

Leo men know how to make a scene and have been rightfully accused of being theatrical. When a Leo man is ready to show his romantic side, he will go all out. He won’t take small steps to show his love. He’ll make grandiose gestures.

When he’s ready to show that he cares about you, he’ll make a scene that practically announces to the world exactly how he feels. It’s best to take his romantic actions and dramatic attempts to win you over as all the proof you need that he’s in love with you.

10 Tips on How to Make a Leo Man Miss You10 Signs a Leo Man Cares About You
Hello, I'm Liz