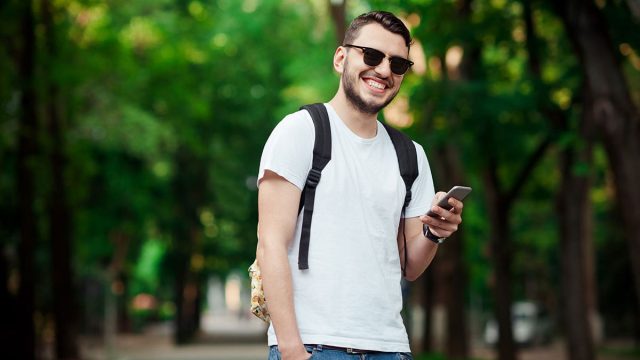 If you want to win over this romantic sign using only your phone, then you need to master the art of the Pisces man text seduction.

How can you seduce a Pisces guy over text messages?

To successfully seduce him with texts, you need to know the typical Pisces man’s personality and communication style.

Does he like texting every day, or would he prefer to talk on the phone? Does he want you to send him photos, or would he rather wait to see you in person?

The more you know about his zodiac sign, the better prepared you will be to win your Pisces man over and seduce him with just your text messages.

If you have recently exchanged numbers and he still hasn’t texted you, don’t panic and think that you have an uninterested Pisces man.

He is absent-minded and shy, so it’s likely that your Pisces guy either forgot to text you or he’s nervous about what to say.

Some signs are aggressive and need to be the first one to message a romantic interest in order to establish dominance in the relationship, but not a Pisces man.

He will be relieved that you took the pressure off of him by showing your interest and texting him first, so don’t be afraid to make the first move.

Send him a simple text saying, “Hey, how are you?” with a smile emoji to get the conversation started.

2. Be Honest and Direct

If you are wondering, “What does a Pisces man find attractive in a woman?” The answer is honesty.

He doesn’t like it when people play games or lie about their feelings. He wants you to be open and direct in your text messages.

This doesn’t mean that you should be blunt or harsh. He is a sensitive guy, so make sure to word your texts carefully and tactfully.

Don’t try to be coy or act like you aren’t interested in him. Let him know that you like him and express your interest because your Pisces guy appreciates honesty.

3. Tell Him How You Feel

Even though he is honest and open with his loved ones, a Pisces man often comes off as cold and aloof when you first meet him.

His sensitivity and caring nature combined with his standoffish persona can make a Pisces man confusing to others who don’t know him well yet.

But a Pisces guy loves to discuss and analyze feelings, so he’s the person to text when you want to talk about your emotions.

Text him how you feel, whether it’s about him or something else, and ask him how he is feeling, too.

When he engages in a back and forth text conversation about emotions, it’s one of the signs a Pisces guy likes you.

If you want to know how to get a Pisces man to like you with your text messages, send him photos of yourself.

They don’t need to be sexy or revealing photos. If your Pisces guy likes you, he will be happy with a classy, sweet photo of your smiling face.

He is a creative guy, so you should try to put an artistic spin on your photos. Use interesting angles, natural lighting, and eye-catching backgrounds.

Don’t filter yourself until you’re unrecognizable. Pisces men prefer a natural look, and he wants to see what you really look like, not a blurred and altered photo of you.

If you want to spice it up a little, send him a snap of yourself wearing sexy lingerie, or send a picture of the lingerie laid out on your bed and promise you’ll wear it for him later.

He likes a feminine, flirty style on women, so opt for delicate, lacy underwear in pastel colors instead of wearing black leather and chains.

5. Text Him About Ideas

Pisces men are very spiritual and they are interested in anything metaphysical. He loves talking about aliens, ghosts, and other paranormal phenomena.

If you want to know how to make a Pisces man love you, engage him in a texting conversation about abstract ideas.

Your Pisces guy is just as turned on by your heart and your brain as your body, so you will intrigue him by texting about the mysteries of the universe.

He is also creative and likes to brainstorm over text. Send him photos of an artistic project you are working on and ask for his input.

Your Pisces man will be impressed by how open-minded and imaginative you are, which is a huge turn-on for him.

6. Tell Him You Miss His Touch

If you are trying to seduce your Pisces guy over text while you are apart, you can instigate a saucy message exchange by telling him how much you miss him.

Start by sending him a sweet message saying that you can’t wait to see him. Then ramp it up by telling him what you want to do with him when you reunite, in as much detail as you’re comfortable with.

Text him that you can’t wait to be close to him, and run your fingers through his hair, and kiss him.

If he takes the hint, your Pisces guy will probably escalate your texts from there. But whether or not you can get him to send you sexy texts, he will appreciate that you’re missing him and thinking of him.

If you want to win him over with your texts, then you need to know how to compliment a Pisces man.

Although they may not show it, Pisces men often struggle with insecurity and self-doubt. You can almost guarantee a text back (and probably a compliment from him) if you lavish your Pisces guy with praise.

Be specific in your texts and compliment him thoughtfully. Make an effort to tailor your praise to him instead of sending him generic compliments.

For example, tell him that you love the scar on his lip and the story behind it. This kind of compliment warms a Pisces man’s heart and makes him feel close to you.

You can send him sexier compliments, too. Tell him that he’s the best lover you’ve ever had and that you love the way he touches you.

8. Text Him Consistently and Frequently

Whether you are already dating a Pisces man or just want to be, you need to text him consistently and frequently.

This might seem unfair because you can’t expect your Pisces guy to text you consistently in return.

Pisces men can go from texting you ten times a day to texting you once every ten days. This doesn’t mean he’s not interested in you, it’s just that he is easily distracted.

He might not always get back to you, but that’s just because he has his head in the clouds most of the time and can be forgetful about mundane things like texts.

Don’t get discouraged if his responses are sometimes infrequent. Keep texting your Pisces man and impress him with your reliability.

9. Be Flirty and Playful

Pisces men are highly intuitive and empathetic, so remember when you are texting your Pisces guy that he absorbs your emotions through your texts.

He is much more likely to respond and look forward to your messages if you are positive and upbeat.

A Pisces man wants you to share your feelings with him and come to him with problems, but you should strive for the majority of your texts to be happy and fun.

Don’t make him dread messages from you by only texting him when you’re feeling gloomy or when there’s an emergency.

When you are texting a Pisces man, keep your tone flirty and playful. Text him that you hope he’s having a great day, that you love him, and that you can’t wait to be with him in person.

A Pisces guy is attracted to an assertive woman who knows what she wants and isn’t afraid to go after it.

He likes it when you make the first move and reach out to him, but this doesn’t mean that he wants you to constantly chase him or insistently try to communicate with him.

If you want to know how to attract a Pisces man, don’t text him too aggressively. If he doesn’t respond to your first message, wait a few hours or even days before sending another text.

There is a difference between texting consistently and texting aggressively. If you always text your Pisces guy good morning or good night, those are sweet, consistent texts.

But if you text him over and over relentlessly until he responds, that’s texting aggressively.

Don’t text him dozens of times in a row if he’s not responding because when he finally gets around to reading his texts and sees your wall of messages, it will turn him off.

Keep your messages short and sweet, and only send one or two in a row before he responds if you want to seduce a Pisces man over text.

Pisces Man & Aries Woman Compatibility: Perfect Match?How to Get a Pisces Man to Respond to Your Text
Hello, I'm Liz