How to React to a Pisces Man Silent Treatment 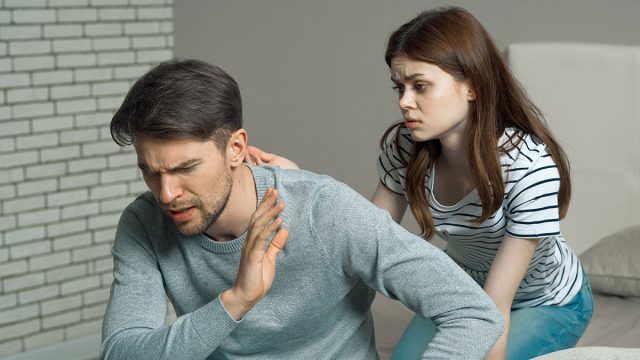 A Pisces man’s silent treatment can be one of the few sources of frustration in a relationship with a Pisces man.

He’s charming, sweet, romantic and caring. Which is why it can be surprising and heartbreaking when he suddenly goes silent.

When a Pisces man is done with you, he will make it clear. He won’t just give you the cold shoulder. When he goes silent, he often needs space.

How you react to a Pisces man who goes quiet can determine the ultimate course of the larger relationship. A Pisces man will not respond to certain tactics.

You have to understand his unique personality in order to bring a Pisces man out of his shell for good. Subtle is better than dramatic reactions.

When a Pisces man ignores your texts, the best thing you can do is give him space at first. You don’t want to outright ignore him. But be sure to keep yourself busy. Don’t keep checking your phone to see if he’s gotten back to you.

Whatever you do, don’t send him rapid fire texts. When you push, question, guilt trip or corner a Pisces man, you’ll only drive him away even more. This behavior won’t bring him around.

If anything, it will intimidate a shy and sensitive Pisces man. He needs to feel comfortable coming out of his shell slowly and in his own timing. Usually, when a Pisces man goes quiet, he needs some time to himself.

Don’t rush him. After a week has gone by, if you haven’t heard anything back from him at all and if he makes no attempt to contact you, try to reach out in subtle ways. Drop him a line and be friendly.

Don’t go into attack mode no matter how tempted you are to confront him. What you assume to be rejection or an insult may actually be a case of your Pisces man being stuck deep in his own thoughts and just not that conscious of what you need at the moment.

He may not intentionally ignore you but it can come across that way. That is because Pisces men go deep into their own fantasy worlds and they don’t come back out of their daydreams or sulking sessions until they’ve processed their feelings.

A Pisces man who is not ready to open up about his deeper, more vulnerable feelings, will go silent when he’s upset. If you try to pry into his private space, he’ll only see you as an adversary to protect himself from.

Don’t Pour Your Heart Out

While a Pisces man does appreciate a vulnerable, affectionate, and emotional partner, he doesn’t want to feel pressured. If you open your heart to him and tell him that he’s the love of your life and you can’t live without him, he’ll disappear.

A Pisces man needs to feel like he’s got some breathing room in the relationship. Ironically, he doesn’t usually try to take time apart from you because he wants to always be around you. But if he doesn’t feel he has the option, he can shut down.

Pisces men can be easily overwhelmed by their own feelings. If your heavy duty emotions also come into the picture, a Pisces man will also shut down. He doesn’t always have the bandwidth to manage his feelings and yours.

Sometimes, he can deal with your emotional needs and juggle his own. But when a Pisces man is in a crisis, stressed out or going through his own deeper emotional ups and downs, he will need some time to himself to deal with this.

He will go silent when he is trying to avoid or deal with his deeper emotions and if you give him space, a Pisces man will eventually come back around. The worst thing to do is to crowd him.

If you stay away and make a Pisces man miss you, eventually he will be likely to start to tiptoe back into your life. He’ll try to reach back out to you again. The best thing to do next is apologize.

If you still don’t hear from him after keeping your distance, try to reach out to a Pisces man. Apologize to him for any role you may have had in a conflict or argument. Perhaps there was no real falling out.

This can happen. Pisces men are sensitive enough to turn quiet for what seems like no apparent reason. But he’s always got a reason even if you don’t know what it is. Always apologize. Even if your apology is an expression of sympathy for his feelings.

A simple statement like “I’m sorry to hear you are going through this,” can be an important way to bridge the gap with your Pisces man. This can make all the difference between a Pisces man being quiet for a few days or a few weeks.

Help him reconnect with you by taking a soft, nonconfrontational approach. Apologize to your Pisces man in order to show him that you are not trying to dominate or overpower him. Show him you really are an ally and here to support him.

Whenever you’re dealing with a Pisces man, it does help to be humble. How does a Pisces man test you? He will try to provoke you or make you jealous. He may try to test you to see how compassionate you are or whether you empathize with him.

Yet one thing a Pisces man will almost never do is to go silent as a way to test you. He just can’t stand being away from you for any amount of time. When he goes a few hours without talking to you, he’ll miss you.

The only time a Pisces man will want to take a break from communication or contact will be if he’s upset or lost in his own daydreams or imaginings. He won’t go silent just to test you unless he’s angry.

When a Pisces man distances himself, you know it is a red flag. He doesn’t do to set a trap because it can too easily backfire. He’ll never want to risk losing you.

What happens when you ignore a Pisces man? If you keep quiet for a short time, he’ll come back around. But if you ignore him or give him a taste of his own medicine, he will become hurt and feel like you’re abandoning him. Even if he was the one to act this way initially.

Make Him Miss You

If you’re wondering how to destroy a Pisces man, the worst thing you can do is to ignore a Pisces man. If you give him some downtime, a Pisces man will miss you. This is the reaction you want. You want absence to make his heart go fonder.

Ideally, when a Pisces man misses you, he will start to communicate with you again. He’ll want to put bygones in the past and just move forward. He will also want to patch things up before you have a chance to move on and find someone new.

You don’t have to disappear for an inordinate amount of time in order to get a Pisces man to want you back. It doesn’t take a Pisces man long to miss you unbearably if he’s really in love. He can’t stand time away. Use this to your advantage.

When a Pisces man ignores you, remind him of who he is dealing with. Play up your presence on social media. Remind him of your beauty and unique charm. Post sexy, romantic and attractive selfies online where your Pisces man will see.

He will be watching. He just can’t help himself. A Pisces man will continue to wonder what is going on in your life, even if it has been a few days since he last spoke to you. He will keep an eye on you.

Show your Pisces man what he is missing. Play up your confidence and make it seem like you’re living your best life and having a great time. Show him that you are popular, but don’t provoke his jealousy.

Look your best and go out for a night with friends. Post plenty of photos. If your Pisces man works with you, show up looking fabulous. Don’t convey the image of someone who has lost sleep crying over him.

Don’t push a Pisces man too far when you’re trying to reconnect with him. Leaving a Pisces man alone initially is the best course of action. Give him a chance to regret ignoring you.

Even when he does reach out to you, play it cool. Don’t try to push him for explanations. Don’t use guilt trips or intimidation tactics to get a Pisces man to explain why he went silent.

When he starts to come around, treat the relationship as if it still on relatively thin ice. It is, in some ways. A Pisces man may put a toe in the water again but this doesn’t mean he’s ready to get back to where you were before.

Pisces Men in Relationships – What You Need to Know10 Online Dating Tips to Attract a Pisces Man
Hello, I'm Liz