Pisces Men in Relationships – What You Need to Know 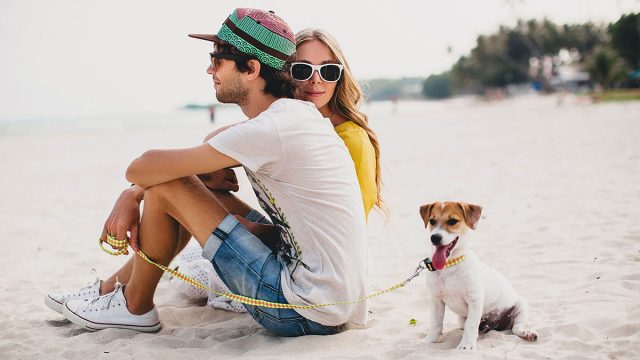 A Pisces man in relationships can seem like the ideal guy. He’s sweet, romantic, compassionate and understanding.

A Pisces man is affectionate and caring. He loves to show you how much he cares. He’ll do anything for you.

When a Pisces man has a crush, he will upend his whole life to make you a priority. He wants to spend all his time with you.

Pisces men don’t know how to maintain healthy distance in relationships. He can baffle you by wanting to always be around you, but then becoming sulky.

Pisces men are endearing, charming, romantic and sensitive. You need to know how to not offend or intimidate a Pisces man when you’re dating one.

What attracts a pisces man? A woman who is kind, compassionate, grounded and intuitive enough to basically be able to read his mind because he won’t just tell you what’s wrong. He’s sensitive to criticism, real or imagined.

Pisces men always overthink things. They can sense the slightest changes in energy and will assume the worst because they are so sensitive to the slightest shift in your tone of voice, for example.

If you’re going to date a Pisces man, you’ve got to get ready to stay a step ahead of his assumptions. You’ve got to be aware of his sensitive nature and be very careful to not offend or scare him.

This is easier said than done. There are an endless number of things a Pisces man can get hurt or offended by. He may be convinced that he is being rejected or abandoned just because you make a slight comment or joke.

You’ve got to be careful with a Pisces man. Choose your words carefully. A Pisces man may find it difficult to face criticism even if it is going to help him in the long run. A Pisces man may also read too much into everything you say or text.

If you text him a joke, but he can’t tell that you’re kidding, he will be devastated. You’ve got to be very clear about your communication with a Pisces man or else he will get the wrong idea.

How does a Pisces man test you? He may drop hints and hope you figure out what he really wants when he doesn’t tell you directly. Pisces men are empaths and they can pick up on subtle clues of what you want.

He’ll assume you can easily do the same. His empathy can work in your favor because a Pisces man will easily anticipate all of your needs. He’ll respond to exactly what you want even before you have to ask.

But on the other hand, his empathetic nature can also backfire. He will expect you have the same level of nearly psychic connection to him that he has to you. He will assume you are on the same page even if you are not. A Pisces man will want to avoid conflict.

Rather than asking for what he wants or telling you what he needs, he will just expect you to figure out his desires and boundaries based on what he hopes are your own empathy skills. This can create unreasonably high expectations that no one can live up to.

What attracts a Pisces man in a relationship is your ability to relate to him and show that you understand him. When you show your compassion and empathy toward a Pisces man, he will feel a stronger connection to you.

He’s often misunderstood, and he knows it. A Pisces man knows that he is not going to easily meet someone who really gets him. When you see through the illusions and understand his true personality, he’ll see you as a treasure.

A Pisces man is often misunderstood because he’s such a dreamer. He is an artist and his intuition and connection to the other realms can make it seem like he is not completely from this world.

He doesn’t easily fit into society and can see through most of the social conventions that other people fall for. He is often lonely, even in a crowd, because he doesn’t easily find kindred spirits among his peers.

When a Pisces man is done with you, you’ll know it. He will make no effort to try to be with you. He won’t try to please you or make you happy. He won’t even care if you are flirting with other guys.

But under normal circumstances, a Pisces man can be extremely jealous. He will question your relationship to male friends or may become insecure if you still talk to your ex. A Pisces man may ask who every guy is that is on your social media.

He’ll follow you online to make sure that he’s interacting with your posts more than any other guy. He won’t want to leave any potential room for doubt or for other guys to win your heart away from him.

Pisces men can become jealous and when they do, they are more likely to sulk and become depressed. He may be angry, but he’ll let his anger simmer rather than lashing out at you.

You need to know how to keep a Pisces man wanting you. He’s a healer by nature, but is also a wounded healer. He’s always working on his own wounds and this can make him a tragically flawed lover.

His attitudes and beliefs are shaped by his own wounds and traumas but a Pisces man is also highly sensitive to the wounds and healing needs of others.

A Pisces man may be obsessed with the idea of spiritual healing. He’s always working on himself and trying to evolve and improve. He may also try to help you to face your inner demons and heal as well.

When a Pisces man offers to help you, it’s best to take him up on his offer. It makes him feel valuable and important when he is able to help you work through your wounds.

When a Pisces man is not interested in a relationship with you, he won’t give you the time of day. But when you’re dating a Pisces man, you can rest assured he will act as if you’re married or well on your way to being married.

Pisces men love commitment and are emotionally deep. He wants to lose himself in the relationship, actually. He’s offended by the idea of boundaries and prefers to delve into every aspect of your life.

It may seem like a Pisces man is being intrusive, he’s not. He’s just trying to connect with you on every possible level. He wants to be devoted to you and expects this same deep level of connection in return.

One of the most common Pisces man characteristics is his artistic nature. A Pisces man has the perfect makeup to be artistic and creative. He is often able to play a number of instruments and sing. He may also be gifted in the visual arts.

A Pisces man is also creatively gifted when it comes to writing. He may show you that he is able to see the connections and symbols that others miss. This is what makes him a natural artist.

His vision can be markedly different from that of the average person. Pisces men are often disregarded as idealistic dreamers and scolded for not being practical.

This is an extension of a Pisces man’s artistic and imaginative nature. He is creative, dreamy and can easily see the world in his own unique way.

Pisces men will want to settle right down and get married right away. They just may not tell you this is the plan. He is quick to assume you’re going to be together forever, but slow to openly state this commitment.

He may be planning the wedding in his mind as he procrastinates when it comes to actually popping the question. He may be thinking about all the things he wants to do with you by his side.

But he won’t always express these desires openly. He may not say he wants to move in with you. But he will research online to find your shared dream home and tell you about it after the fact.

Part of the reason he takes his time is because a Pisces man is cautious about anything that could backfire or hurt his feelings. He is extremely vulnerable, but he never wants to show this vulnerability.

If you’re wondering how to know if a Pisces man is interested in you, the most important thing to keep in mind is he is a die hard romantic. A Pisces man will show you his love in traditional, sentimental and romantic ways.

A Pisces man will make every day feel like Valentine’s Day. He will never let you forget that he is romantically attracted to you. He’ll want to take you out for candlelight dinners with soft music in the background.

Looking and finding love with a Pisces man doesn't have to be impossible! Here's how...

If you’re wondering how to make a Pisces man want you, play to his biggest strength, his imagination. Make sure you keep the relationship fun, playful and creative.

A Pisces man will never stay with a woman who seems to lack imagination. Even if he loves you, a Pisces man will head for the door if things become too boring or mundane.

A Pisces man who is successful in a long-term relationship is with a woman who understands his need for play and creativity. He won’t want to deal with boring chores and routines. He’ll need to continually be mentally and emotionally stimulated.