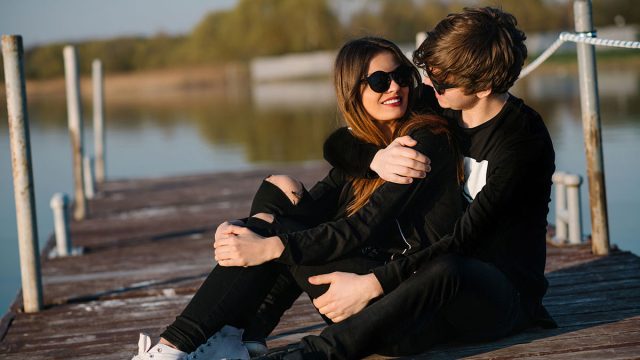 When it comes to a Pisces man, is PDA something he enjoys, or would he rather you keep your hands and lips to yourself in front of others?

Some signs adore sharing how they feel about their partner with the world and they don’t care who sees them kissing or holding hands with their loved one.

Others are more conservative and would rather keep intimate moments private. So how can you tell which category a Pisces guy falls into?

By learning more about his zodiac sign, you will be able to figure out whether or not your Pisces man likes public displays of affection.

They Express Feelings With PDA

If you are curious about how to know if a Pisces man is interested in you, he will probably make it very clear.

Although this sign can be shy, he can’t help but wear his heart on his sleeve. If he likes you as more than a friend, you can count on certain behaviors from him.

A Pisces man is naturally loving and affectionate, so if he is dating you or crushing on you, he will find ways to be close to you.

He will brush your hair out of your eyes, rub your back reassuringly, or sit close to you on the couch. He won’t care who sees because his only concern is you.

A Pisces guy is comfortable expressing his feelings, and one of the ways he conveys his emotions is through affection, even in public.

Engaging in light PDA is one of the typical Pisces man in love traits. Your Pisces guy needs plenty of attention and affection, otherwise, he will feel unloved.

He wants to please his partner, so if you hate PDA, he won’t force it on you.

But if you don’t do any PDA at all with your Pisces guy, he will feel hurt and confused because that’s what happens when you ignore a Pisces man.

If you want to keep your Pisces guy happy in the relationship, let him take your hand in front of others or kiss your cheek in public.

He will appreciate the effort because it makes him happy and proud to show the world that you are his.

Just because a Pisces guy likes public displays of affection doesn’t mean that he wants to engage in a full makeout session with you in front of everyone.

A Pisces man enjoys PDA, but he is still conservative. He doesn’t want to get too sexual with you in public, and he might not be as affectionate in front of certain people like his parents.

When a Pisces man says he loves you but he still won’t kiss you in front of his family, don’t take it as a sign that your Pisces man is not interested or that he’s playing you.

He’s not going to feel comfortable with extreme PDA in front of anyone, and he might not enjoy even light PDA in specific situations.

Be conscientious about how your Pisces man responds to your affection in public to figure out how far he will go in public and who he doesn’t mind seeing.

As a creative and loving sign, Pisces is one of the most romantic signs of the entire zodiac.

He loves traditional romantic gestures like bringing you flowers, chocolates, and jewelry. It makes sense that he also enjoys romantic public displays of affection.

When you’re dating a Pisces man, look for opportunities for romantic PDA. If you are standing underneath some mistletoe with your Pisces guy, point it out and plant a kiss on him.

If a love song comes on the radio, squeeze his hand while you listen to the sweet lyrics. If you attend a wedding together, look for chances to show your Pisces man affection.

The more romantic you are with your PDA, the more your Pisces man will feel like he’s with the right woman.

Although most Pisces men love at least some PDA, they dislike intense or aggressive displays of affection in public.

For example, he won’t appreciate it if you push him up against a wall to kiss him or if you grab his buttocks in front of his family.

If you want to know how to attract a Pisces man, don’t be too aggressive with your PDA. He will be turned off if you are pushy or forceful about showing him affection.

The key to perfect PDA with a Pisces man is to keep it light, sweet, and romantic. Kisses on the cheek, holding hands, and hugging are the best ways to show him you care when you’re around others.

A Pisces guy can’t help but show his feelings for his loved one, even in public. But there are many reasons why a Pisces guy doesn’t like to be the one to initiate PDA.

If he doesn’t take every opportunity to pull you in for a kiss, don’t take it as a sign that your Pisces man is losing interest in you.

He could be shy in front of others, or if the relationship is new, he might not be sure that you want him to be affectionate in public.

He would rather wait for you to initiate PDA because he doesn’t want to risk rejection and getting his feelings hurt if you push him away.

If you like PDA and your Pisces guy isn’t being very forthcoming, see how he reacts when you give him a peck on the cheek in public.

He will probably smile and kiss you back or take your hand once he sees that you enjoy PDA as much as he does.

Their Favorite PDA Is Hugging

Among the zodiac signs that enjoy PDA, each sign has their favorite way of showing physical affection in public.

Some signs don’t mind making out in front of other people, while others prefer to just hold hands.

A Pisces man’s favorite type of PDA is hugging. He loves pulling you in close for a warm embrace, no matter who else is watching.

If you are outside together and you shiver, he will gallantly offer you his coat and wrap his arms around you to keep you warm and convey his love.

If you are posing for a photo with his family, he will give you a huge hug to commemorate your relationship in the picture.

Since hugging is his favorite form of PDA, make sure you give your Pisces man plenty of cuddles and embraces to make him feel secure and loved.

They Care About Who Sees PDA

Although he doesn’t care too much about what other people think when it comes to his relationships, a Pisces man is always thoughtful and considerate of others.

When a Pisces man distances himself from you in front of other people, he probably has a good reason that has nothing to do with you.

If you’re out with his friends and he pushes you away when you lean in for a kiss, it’s not because he’s ashamed of you or doesn’t want to show you off.

It’s more likely that one of his friends is going through a difficult breakup and your Pisces guy is trying to be polite by not rubbing his happiness in his friend’s face.

Another possible scenario is that his ex is in the room and he doesn’t want her to think that he’s trying to be cruel or make her jealous.

If your Pisces man is normally into PDA but pushes you away sometimes, he probably has a specific reason that has to do with who is watching.

Pisces men are extraordinarily generous, especially with their loved ones. They sometimes lose themselves in relationships because they want to keep their partners happy, even at their own expense.

A Pisces guy wants to please his partner more than anything. He pays attention to whether or not his partner likes PDA and mirrors her behavior.

You won’t have to verbally explain to your Pisces guy how you feel about PDA. He is observant and intuitive, so he will know without you having to say a word.

If you enjoy PDA, your Pisces guy will make an effort to lavish you with affection in public. If you dislike it, he will try to restrain himself when you’re around other people.

They Are Most Affectionate in Private

Pisces men are very loving and sensual, so as affectionate as he is in public, he is even more attentive in private.

Even if your Pisces guy isn’t crazy about PDA at all, he is sure to be affectionate with you when you aren’t in front of other people.

He likes hugging in public, but he loves kissing, caressing, and more in intimate moments.

Don’t be discouraged if your Pisces man doesn’t kiss you when you’re with family or friends. When you are alone with your Pisces man in bed, he will show you all the affection you could ever want.