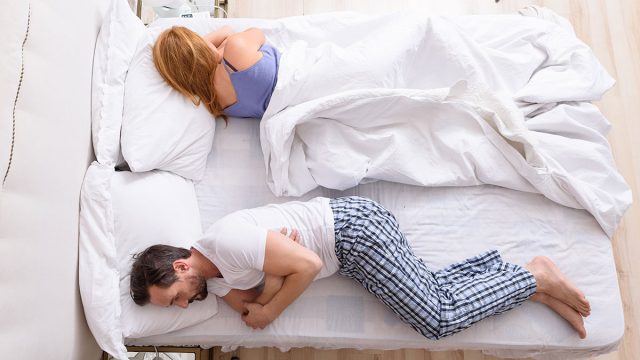 Some of a Pisces man’s negative traits are caused by his positive traits getting out of control.

He is somebody who is in touch with his emotions, for example. If this gets out of control, he becomes overly sensitive and moody.

Pisces’ positive and negative traits are often two sides of the same coin. They are creative, imaginative people who dream big. This becomes a problem, however, when they use their imagination to escape from reality.

He might develop a pessimistic view of the world because it can never live up to his daydreams. Finally, he might detach from reality entirely if this gets too out of control.

Pisces also takes avoiding confrontation to the extreme. He’ll keep people in his life who hurt him just because he doesn’t want to confront them about their behavior.

This is one of Pisces’ worst traits. It may be surprising for some people, but it makes sense if you really think about it.

He comes up with elaborate scenarios in his mind because he thinks the world will never be the good place he wants it to be.

He’s likely been let down before when things didn’t live up to his expectations. Because of this, he might develop a pessimistic view of the world. If he doesn’t expect things to go right, he can’t be disappointed, right?

He also gets easily discouraged when things aren’t going the way he wants them to. He might give up on things prematurely because he thinks he’s just going to fail at them anyway.

Some Pisces catastrophize. He’ll think of the worst-case scenario for every single thing in his life and genuinely expect that everything is always going to go wrong.

It isn’t always obvious that a Pisces man is being secretive. He is perfectly happy to talk to you.

He’ll share things about himself and tell you stories. Because he can be friendly and chatty, many people assume he’s an open book.

He doesn’t always open up entirely, though. There are things about him that he may never reveal to anyone, even those closest to him.

He might not tell others how he is truly feeling. Actually, he may do this because he doesn’t want to feel like a burden or ruin their good moods.

If he loses his job, he might not tell his partner right away. But, even if he can’t always keep a secret forever, he still might try.

Pisces is capable of working hard when he cares about something. However, if he finds something boring or just doesn’t want to do it, he’ll avoid it as best he can.

He doesn’t like to put in the effort to get things done if he doesn’t have to. So he might do the bare minimum at work to squeak by and keep his job. He’s not often an ambitious career man.

Pisces may neglect his responsibilities. For example, if he goes too long without doing household chores, he’ll get overwhelmed and just ignore them entirely.

It doesn’t matter that he’d be less stressed out if he just stayed on top of them.

Sometimes, Pisces will just sit back and daydream instead of doing what he’s supposed to do. He was likely that kid who always doodled in class or just stared off into space instead of taking notes.

Being in touch with his emotions is one of a Pisces man’s traits that many people appreciate. It can be a bit much at times, though.

He takes everything personally. If you don’t respond to his text right away, he’ll assume you’re mad at him or that you’re ignoring him on purpose.

Pisces tend to be highly empathetic people as well and can sometimes get overwhelmed by the emotions of others.

He’ll get stressed out and moody if too many people around him are upset. When this happens, he may get so caught up in how he feels that he’s unable to be as comforting and sympathetic as he normally is.

Pisces often wants to see the best in others. Despite his pessimism about some things, he truly wants to believe that people are good and that he can trust them.

The desire to trust people is one of Pisces’ positive traits, but some Pisces men need to learn that you can’t always trust everyone.

If somebody tells him something, he’s going to assume it’s true. But, of course, they might be mistaken or even intentionally lying to him.

He might even sense that something isn’t right about what they said. But he’ll trust that they are correct anyway.

He doesn’t always learn from past mistakes either. The same person might trick him or manipulate him multiple times before he finally stops believing everything they say.

Pisces’ dark side can be seen when his escapism gets in the way of him living his life.

He has a vivid and active imagination. That’s one of the things that makes Pisces fun to be around!

But, unfortunately, he can get detached from reality easily, and when this happens, that’s when his imagination causes problems.

He might start avoiding people or completely ignoring his problems. Even if something has an easy solution, he’d rather hide inside a fantasy world than deal with it.

He may use books or television shows as a means of escape if he’s unhappy with his life. A little bit of escapism is fine.

It can help somebody to calm down and face their problems at a later time. However, Pisces sometimes wants to escape entirely and never face those problems.

Of all Pisces’ characteristics, this one probably causes the most problems for him. He tries to avoid confrontation at all costs.

He would rather keep a toxic person in his life than confront them about their behavior. So even if they are constantly upsetting him, he won’t talk to them about it.

He avoids arguments as best he can, even minor ones. He might agree with somebody just to keep the peace even when he has the opposite opinion. He’ll take the blame when somebody else is at fault just to smooth things over.

He has trouble cutting people out of his life. He might not break up with a partner even if the relationship isn’t working out. He’ll continue being friends with people who hurt him or who don’t care about him.

If somebody confronts him about something, he usually can’t handle it. He’ll walk away or say what they want to hear to diffuse the situation.

A tiny trick to snatch your Pisces man's heart?... even if he's cold and distant...

Pisces can be a people-pleaser, just like Libra. Unfortunately, this means he has some of the same problems with decision-making.

He may seem two-faced at times. For example, he’ll agree with you on a certain matter and then agree with somebody who has the opposite opinion.

This doesn’t always turn out well for him. He might make somebody happy for a little bit by agreeing with them, but if they find out he was lying, they’ll be upset.

Pisces may have trouble making decisions because he’s afraid he’ll make the wrong one.

Again, he can sometimes have a pessimistic view of the world. He may doubt himself and think he’s going to mess things up if he chooses incorrectly.

Pisces sometimes seems like he’s on another planet entirely. His head is in the clouds, and it can stay up there for long periods of time.

Usually, Pisces is a good listener. However, when he gets too caught up in his thoughts, he might not hear a single word you say to him.

If he’s in a meeting or a class he doesn’t care about, he’ll tune it out. He’d rather be thinking about something more entertaining.

When he’s off in his own little world, the real world fades away. He is very good at ignoring what is going on around him. He may not even be doing it on purpose all the time.

Pisces’ bad side really comes out when he’s in a bad mood.

When he is in a bad mood, he absolutely cannot see the good things in his life. So to him, everything is terrible, and it’s always going to be that way.

He’ll lose his cool because he’s out of an ingredient he needed for dinner. He’ll block somebody just because they said they didn’t like a movie he likes.

He can have trouble cheering himself up when he gets like this.

Pisces can easily fall into a depression and have difficulty getting out of it. He often needs other people to help him if this happens. But, unfortunately, he is unlikely to reach out to his friends and loved ones.

Best Ways to Communicate with a Pisces ManPisces Man in Marriage: What Kind of Husband is He?
Hello, I'm Liz