Do Pisces Men Have a Freaky Side? 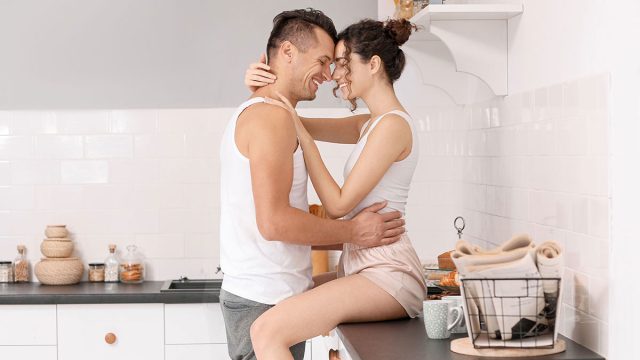 A Pisces man’s freaky side may be hidden at first. He may seem naïve, but don’t let him fool you.

Deep down, Pisces men want to alter their consciousness, and sex is as good a way to do this as any other method.

How does a Pisces man test you before revealing his freaky side? He will wait to see if you give clues as to your sexual interests first. Show your freaky side and he’ll show his.

Pisces men are impressionable. Often, they will change their interests and identity to match whoever they are with. In bed, he can be like a chameleon as well.

If you don’t seem to have an edgy side, sexually, he will act modest. But if he sees that you have a more adventurous nature, he’ll let you set the pace for kinkiness in bed.

Pisces Men Can Be Freaky

Sleeping with a Pisces man too soon seldom leads to regrets. Usually, Pisces men know what they want and they fall in love quickly. They have a freaky side in the bedroom because they are so imaginative.

Yet Pisces men aren’t demanding. If he doesn’t think you have the same sexual interests he has, he’ll gladly attend to your desires and fantasies and let his own desires remain secret. This is also true if you seem judgmental.

Yet if you show your Pisces man that you have an open mind and aren’t going to shame or criticize him, he will surprise you. He will share his most intimate fantasies, and some of them are pretty freaky.

He has a love of testing the limits and being intimate is one way that he pushes past all boundaries. For a Pisces man, sex and spirituality are often intertwined. He needs to feel like he can be free to express his deeper desires without being criticized.

He can be attuned to your own emotions and will adjust his freakiness to fit what he thinks you want and expect from him. He may not make the first steps, but if you seem open minded, he’ll let his freaky side emerge.

He’ll Adjust to Your Freak Level

What does a Pisces man look for in a woman? He will be attracted to women who are compassionate, empathic and sensitive and who are creative and artistic. Yet you’ll need to be more assertive than he is.

This isn’t hard to do since he’s usually incredibly shy. If you take the lead, he will follow. This includes your pace and freakiness in the bedroom. He loves to discover new things about you.

If you project an image of innocence but underneath have an insatiable desire for sexual exploration and experimentation, a Pisces man will become instantly infatuated. He will rise to your level of freakiness.

There is nothing you can suggest that he will not at least seriously consider. He wants to mirror you in every way. His deep secret is actually that a Pisces man wants to merge identities with the people around him. He wants to become one with you in every sense.

And that includes changing to become your equal when it comes to level of freakiness. You can count on a Pisces man to not judge you so there is no reason to hold back.

He’s Open to Anything

One of the great things about being friends with benefits with a Pisces man is that he really is open to anything. You can learn a lot from each other. He is also likely to open new doors for you as he shows you his own freaky fantasies.

When you suggest something new, even if it seems strange or taboo, a Pisces man will be eager to try to make you happy. He’ll be open to almost anything you suggest.

Pisces men are people-pleasers and they do love having new experiences. This can be part of the reason he will adapt to your sexual interests. He wants to make you happy more than he wants to be reserved and shy in bed.

He may even tell you that he will try anything at least once. Most things twice, just to test himself and be sure as to whether he really enjoyed it or not. Pisces men love to explore sexuality the way some people like to travel.

Yet instead of bumper stickers and postcards from all the places he’s been, a Pisces man accumulates ideas about different techniques and creative ways to explore in the bedroom.

Pisces men are naturally artistically inclined. He brings this creativity into the bedroom as well. Certain songs can put him in the mood but so can things like glow in the dark body paint.

A Pisces man also has a knack for theatrics and disguises. Just as he loves to change his identity like a chameleon to please others, so too does he love to try on new appearances and change his look.

This can lead to some spicey and unusual encounters in the bedroom. He’s fond of role playing and wearing different costumes and disguises. If he thinks you are open to it, he may suggest dressing up to fulfill different fantasies.

Some of his suggestions may seem odd and unconventional, but a Pisces man is playful when it comes to sexuality and he wants to explore every option and possibility. This can include wearing your clothing or wearing costumes or masks.

Pisces men aren’t just creative and artistic, they are also resourceful. This comes from a combination of being complacent and creative. Some people think they are lazy, but Pisces men just like to make the most of what they have.

When it comes to exploring sexually, a Pisces man can substitute what he has around the house for more elaborate sexual enhancement aids. If you have a fantasy about being bound, he may use old socks if he can’t find rope.

He can also turn any setting into a love nest. From the back of a car to a campground to his office at work. His imagination is highly active and he will use whatever is at his disposal to spice up sexual encounters.

Though this can lead to some awkward situations, a Pisces man will look back on the bizarre scenes he has created in the past and laugh. It’s all fun and games to him. What attracts a Pisces man is spontaneity.

If you can make the most of every moment, even when it comes to sexual encounters in unconventional or bizarre places, he will appreciate your creativity. You will have a common bond when it comes to being resourceful.

Discovering a Pisces man’s turn on spots can be a tantalizing game for him and for you. Pisces men love to experiment in bed. He will constantly imagine what would happen if he changed one element or another to shake things up.

He thinks of what he can add to or take away from each encounter to make things more exciting, intense and extreme. Pisces men can be freaky in bed because they are so open to experimenting.

He also loves to innovate. If something feels good, he’ll try to experiment to learn ways to make it feel even better. This is part of his restless nature. He’s like an alchemist, always trying to create perfection by blending different things together.

If he loves certain foods, he’ll try to dabble with bringing food into the sexual encounters. The same is true for experimenting with music, scenery, games and even alcohol and drugs. He loves the idea of changing consciousness.

A Pisces man knows that some experiments will fail, but he’s willing to explore and discover what works and what doesn’t. His ideal sexual partner is someone who is open to similar exploration and who isn’t shy about pushing boundaries.

If you’re wondering how to keep a Pisces man wanting you, the key is to come close to satisfying his fantasies. But don’t completely make him feel fulfilled. This will keep the experiment going.

One of the best signs a Pisces man is in love with you is his willingness to please you. He may put his own desires on hold to make sure you are happy. It’s easy to get swept away and forget about his needs altogether.

Yet if you really want to make sure the efforts are shared, remember that what he wants more than anything is to eliminate all the boundaries and merge with you. When you push boundaries in bed, you’re getting closer to his ideal.

Pisces men are freaky. They don’t want any limitations or restrictions. Ideally, they want to be able to try anything that comes into their minds. And being imaginative, there is a lot they can come up with.

He will want to push boundaries through sensual experimentation. He will also want to try to test his own limits. He can do this in many ways but one way is by experimenting with extremes. Hot, cold, pleasure, pain, a Pisces man wants to know what how far he can go.

When a Pisces man is done with you, you’ll know. A Pisces man who is not interested will shut down. He won’t show any sign of being freaky or inventive. In fact, he’ll pull back altogether and won’t seem interested in sex. This is a red flag that he’s lost interest.