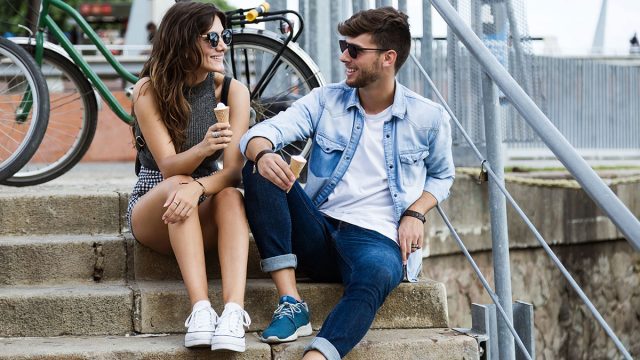 If you are interested in dating one of these signs, then you need to understand the typical Pisces man Aquarius woman compatibility.

Can these two zodiac signs have a strong and successful relationship?

Because these signs are positioned right next to each other in the zodiac, you might assume that makes Aquarius and Pisces soulmates.

But unfortunately for this couple, a Pisces man and an Aquarius woman are highly dissimilar, and in this case, opposites do not attract.

The lack of compatibility between a Pisces man and an Aquarius woman can be explained by the personality traits and behaviors of their zodiac signs.

A Pisces and Aquarius friendship can be enjoyable, but they will never bond closely enough to become the best of friends.

The Pisces and Aquarius compatibility in friendship is perhaps the strongest bond between this pair. They are better suited as friends or coworkers than as romantic partners.

An Aquarius woman will like how easy-going and laid-back a Pisces man is. She needs friends who either ground or excite her, and she will see Pisces as a potential grounding force.

But when the Pisces man eventually reveals his highly emotional and sensitive nature to the Aquarius woman, she will see that he can’t always be a source of comfort for her, after all.

The Pisces man will like an Aquarius lady’s quirky charm. He will think that she is a creative and independent spirit, just like he is.

But while an Aquarius woman is fiercely independent, she is much more logical than emotional. She hates being confronted with other people’s feelings and refuses to be held responsible for them.

A Pisces guy will become frustrated when his many attempts at getting his Aquarius friend to open up to him are thwarted.

He will see that she either lacks emotional depth or is uncomfortable letting her guard down, and neither of these possibilities is appealing to a Pisces pal.

On the other hand, when a Pisces guy is in a good mood, his Aquarius friend will find him relaxing and pleasant company.

This pair can have fun together by talking about abstract ideas and wild conspiracies, which is a passion they share.

There is just not enough common ground for them to forge a close friendship, but that doesn’t mean they will dislike each other or can’t have a great dynamic within a group.

A Pisces man can teach an Aquarius woman to be more accommodating and sensitive, while she can show him how to be more assertive and stoic.

The typical Aquarius and Pisces compatibility in friendship is not the strongest bond, although these two can learn a lot from one another and may enjoy each other’s company.

Since these two signs are right next to each other, you might wonder, can Aquarius and Pisces be soulmates?

But typically two signs placed next to each other on the zodiac will struggle to find common ground.

They are like neighbors with completely different personalities, yet forced to be friendly based on proximity.

There is a mutual level of respect between these two signs and they appreciate their differences, but they simply don’t speak the same language, making a romantic relationship nearly impossible to navigate.

The initial attraction will probably be instant on both sides. A Pisces man is drawn to an Aquarius woman’s quirky, unique personality, while an Aquarius lady is intrigued by a Pisces guy’s quiet, introspective nature.

When a Pisces man has a crush, he can’t help but wear his heart on his sleeve. He loves to shower the object of his affection with attention.

But if he’s shy or unsure of their connection, he might hold back from making a move. This would actually be better if the woman he is interested in is an Aquarius.

An Aquarius lady likes to play hard to get. She is extremely independent, perhaps one of the most independent of all the zodiac signs, and she gets turned off by too much attention.

An Aquarius woman doesn’t want a clingy lover, so a Pisces man’s mysterious nature will be to his advantage when it comes to seducing her.

If they make it past their apparent differences, Aquarius and Pisces may find that they have more in common than they initially thought.

Each sign of the zodiac has an “age” or maturity level relative to the other signs. This age is based on the sign’s order in the zodiac.

Aquarius and Pisces are the last two signs of the zodiac, making them the “oldest” or most mature signs.

They both have old souls and share innate sagacity that makes them seem wise beyond their years. They also care more about society as a whole than themselves.

Pisces and Aquarius can find common ground in their shared philanthropy and desire to make the world a better place.

Although they have a few things in common, their differences will likely be too numerous for this pair to make a good couple.

The exception is if these two have been dating or engaged for a long time before getting married. If they have already learned how to navigate each other’s many quirks and habits, they have a chance of success.

As long as they don’t go into the marriage expecting one thing and getting another, then it’s possible that a Pisces man and an Aquarius woman can make their relationship last.

But it’s highly improbable that these two will ever be tempted to walk down the aisle together in the first place because they are just too different.

A Pisces man wants an epic romance like the ones he has seen in movies. He will settle for nothing less than an otherworldly love story.

A Pisces man can be described as clingy or codependent because he seeks a partner he can share every experience with, no matter how mundane.

An Aquarius woman, on the other hand, craves a partner who respects her fierce independence and trusts her enough to leave her alone.

Trust and communication are the biggest issues in this partnership. Both of these signs struggle with communication in general, making it even more difficult for them to connect.

And an Aquarius woman’s independence can make a Pisces man feel suspicious and unloved, leading to a severe lack of trust.

She will need to prove to him that her desire for alone time isn’t driven by dissatisfaction in her marriage, and he will have to accept that he is with a partner who needs room to grow as an individual.

An Aquarius woman will never be as emotionally available as a Pisces man needs, and she will have to learn to be more in touch with her feelings and sensitive towards her partner.

Overall, the Aquarius woman and Pisces man love connection probably won’t be enough to make these two get married, but if they go into the union well-prepared, they have a chance of making it work.

The typical Pisces compatibility with Aquarius in the bedroom is an odd match. There can be fireworks, but ultimately, the spark will fizzle.

Their mutual curiosity about each other will be enough at first to make Aquarius and Pisces sexually compatible.

A Pisces man’s aloof and dreamy nature will attract an Aquarius woman, while her flirtatious charm will work its magic on him.

These two have a lot to learn from each other in the bedroom, but eventually, they will have each taken everything they can from the relationship and will need to move on to partners who better fulfill their disparate needs.

An Aquarius woman is extremely emotionally guarded and it can take a great deal of time before she is willing to show any vulnerability.

A Pisces man craves an intense emotional connection with his sexual partners, so he will have to work hard to crack his Aquarius lover.

He can teach her to open up, but she will never provide him with the emotional depth and sensitivity that he needs in a lover.

Once a Pisces man discovers what his partner likes in the bedroom, he tends to fall into a dull routine.

He gets so focused on his partner’s pleasure and doing what he knows works well to please her that he fails to bring variety into his lovemaking.

An Aquarius woman will never settle for a boring sex life, so she will be more than happy to take the lead and initiate wild, experimental sex.

Her Pisces partner will be open to her suggestions and ideas, but eventually, he will feel like he’s not enough for her and that she can’t be pleased.

A Pisces man has a high sex drive and particularly needs physical intimacy to feel close to his partner.

But an Aquarius woman is perfectly content to go a long time without sex, only breaking her abstinence when the physical urge strikes her.

These fundamentally different approaches to sex and romance will cause a great deal of misunderstanding and tension between a Pisces and an Aquarius.

Although they can both gain a lot from their sexual relationship, they are better off taking the lessons learned and applying them to other partners who are better matches for them.