What to Do When Your Pisces Man is Angry? 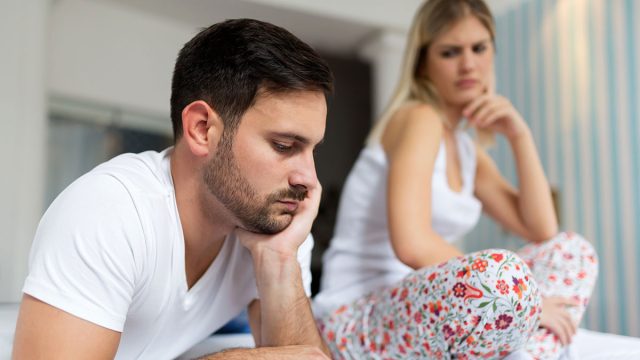 When your Pisces man is angry, do you know the early warning signs? If you’re like most women, you won’t see the signs.

Pisces men can conceal their anger for a long time. You may not know how he feels until it’s too late.

If you want to know how to handle a Pisces man’s temper, you need to watch for the subtle signs that he’s upset. He won’t vent his frustration at first.

He would rather be passive and stifle his emotions. A Pisces man’s silent treatment is one of the top signs he’s mad. You have to know how to de-escalate him.

A Pisces man can easily be soothed when he’s mad. The trick is not letting his anger simmer for too long. You’ve got to know when to intervene.

An Angry Pisces female and angry Pisces male may have slightly different tactics for managing their anger. If you want to know what to do when a Pisces man is angry, the first sign you see is best met with de-escalation.

If he’s in the very early stages of showing anger, he will probably sulk more than yell or overtly show his anger. First and foremost, his feelings are hurt. Act in a soothing way when you interact with him and you’ll likely help him settle down.

When a Pisces man is done with you, it’s already far too late. He has already spent so much time rehashing his anger again and again and is likely to feel like his voice has been unheard. When this happens, the opportunities to intervene have passed.

When a Pisces man ignores you, try to find out what he’s upset about. Apologize up front, even if you’re not sure what exactly is going on. He’ll see this as a peace offering and then will feel safer to open up and talk about what’s wrong.

What happens when you ignore a Pisces man? He will eventually miss you and come around. When he does, don’t minimize his feelings. Instead, try to find out what his underlying emotions truly are.

If he’s angry, a Pisces man is actually really hurt about something. Try to find out what is really going on in his mind. Usually, a Pisces man has been offended or his sensitive feelings are triggered and this leads him to become angry.

He seldom lashes out, so when a Pisces man goes quiet and starts to ignore you, don’t take him for granted. Don’t assume he’s not angry and so doesn’t need attention. It’s better to acknowledge he’s actually angry but doesn’t want to show it.

When you help him understand his deeper, hidden emotions, you can help him express his frustrations in more empowered, assertive ways. This can help to clear the air and prevent further problems.

Do Pisces men feel bad when they hurt someone? Of course, in fact, they never intend to hurt anyone in the first place. When a Pisces man snaps or becomes curt, he automatically regrets it.

One of the best things you can do is to try to soothe his frazzled nerves. He is not one to intentionally hurt anyone’s feelings so when he gets upset, his emotions can overwhelm him. He may not know how to regulate his intense feelings.

One of the biggest gifts you can give your Pisces man is to help him moderate his emotions. Help him sort out what’s really bothering him. Do what you can to soothe him. He is highly sensitive.

Chances are, he’s emotionally and psychologically overloaded and this is causing his intense reaction. When you help soothe his nerves, a Pisces man will gain perspective again.

Remind Him You Love Him

A Pisces, when angry, needs to be reminded that he’s loved. When you reassure him of your connection to him, you can help to calm a Pisces man and can even diffuse his anger. You may completely help him forget his frustration.

Remind your Pisces man that you love him. He needs this reassurance more than other men. When he is angry, remind him of what connects the two of you to each other. Remind him you’re on the same team.

This can help him put his wounds and grievances in perspective. Letting a Pisces man feel connected to you reinstates his sense of security. This will help him get over his anger.

Encourage Him to Vent

Chances are, you won’t see the bad side of a Pisces man until he’s been angry for so long that he becomes completely self-destructive. He’s far likelier to take his anger out on himself than on you.

If you want to preserve his mental well-being and help him work through his anger with as little damage as possible, help him vent. One of the best ways to do this is to encourage his creativity.

Pisces men can use art, music, dance, writing and role play to express their deeper emotions and to clear their anger. A Pisces man can become more settled and serene after a cathartic episode. He is not likely to be assertive.

If you really want to encourage him to express his anger, you may have to work hard to reassure him that it is safe to do so. Show him you can hold space for him as he expresses his dark side and vents his anger.

Look for Opportunities to Grow

If you’re wondering what to do when a Pisces man is angry with you, appeal to his spiritual nature. Try to help him grow and gain new perspective as he works through his anger.

Not only for his own benefit, but for the benefit of your partnership, you can evolve together. A conflict in your relationship with a Pisces man can provide fertile ground for forging a deeper connection.

When you help your Pisces man come to a deeper understanding of what is bothering him, you may both learn that you were triggering each other without realizing it. He may ask you to change your behavior to accommodate him.

If his request is not too unreasonable, consider compromising with him. Meeting a Pisces man halfway can help both of you grow and thrive in spite of initially provoking his anger.

On a similar note, show your Pisces man that you are open to looking at how you can both heal as a result of dealing with the situation that made him angry. A Pisces man who is upset may have deeper wounds to deal with.

You can become a facilitator for change, growth and healing when you help your Pisces man work through his deeper pains and tribulations in this way. Your Pisces man may be inclined to face his fears and insecurities when you are patient and compassionate with him.

Never fight fire with fire, it will completely scare your Pisces man away. Instead, show him that you can meet his anger and resentment with love and understanding. Help him open up and find greater healing.

Pisces is a sign of healing, especially on an emotional and spiritual level. When you help a Pisces man find the bigger picture perspective, he will appreciate your understanding and kindness. He may embrace healing on a new level and forget his anger.

Pisces men don’t like being angry. A Pisces man will avoid becoming or staying angry at all costs. He will ignore his feelings, even as his resentments are clear to others.

When he finally accepts that he’s angry, he’ll want to lash out and be rid of the feeling as quickly as possible. To a Pisces man, anger is viewed as something like a virus or emotional grime that he can’t wait to shake off.

A Pisces man can become lost in his emotions and he knows this. For this reason, a Pisces man will avoid anger because this is the anger he most fears being overtaken by. But when it comes to releasing his anger, creativity can be his best tool.

Remind your Pisces man that he is artistic, musically talented or has other tools at his disposal that can help him overcome his anger. He may need to vent his darker side and using his creativity to do this can be helpful.

Give your Pisces man space when he’s angry. This should be one of the first things you try, in order to let him blow off steam. But even if you don’t realize he’s angry right away, when it becomes obvious, give him breathing room.

Though you may want to rush in and convince him he has no reason to be upset, this can actually backfire. Your Pisces man needs space initially to try to sort things out on his own.

After he’s had a chance to sit with his feelings, he could cross the line into stewing on his emotions. This can be counter-productive. Let your Pisces man have some downtime. Then reach out and show support.

Take a gentle approach and no matter what, don’t try to minimize how he’s feeling or tell him he’s wrong. Show him that you can be understanding and compassionate and he will instantly de-escalate his anger.