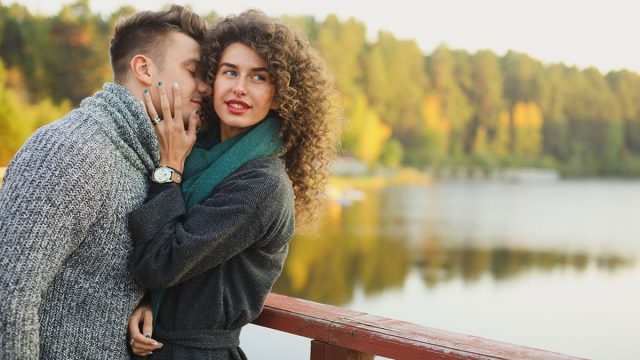 Both have many of the same typical Scorpio traits but with a slightly different spin depending on their month of birth.

October Scorpios tend to behave like stereotypical Scorpios in many ways. They are the most passionate and the most intense.

If you’ve ever met a man who is the epitome of Scorpio energy, he’s likely an October Scorpio man.

That doesn’t mean that November Scorpios are “less” Scorpio, though. They are still intense, passionate, mysterious men.

They just also have a slightly different vibe than an October Scorpio does.

November Scorpios are a little more wild and emotional in some ways. They’re also more reserved in other areas. Like all Scorpios, they’re quite the enigma.

Pluto & Mars vs Neptune & The Moon

The October vs November Scorpio differences happen partially because each sign is split into three subsections called “decans”. Each sign has a planetary ruler and each decan has its own co-ruler.

Scorpio is ruled by Pluto and/or Mars, depending on what rulership system you use.

Pluto is the planet of transformation. It’s intense. It deals with themes related to death and rebirth. This is one of the reasons Scorpio is associated with occult themes and with death.

Mars is the planet of desire. It represents our ambitions, our passions, and our drive.

October Scorpios are only ruled by Mars and Pluto and do not have a separate co-ruler. This means that their Scorpio nature is extra intense. They are the epitome of Scorpio. Everything that Scorpio is, they embody it.

November Scorpios are co-ruled by either Neptune or the moon, depending on when in November they were born.

Neptune is the planet of dreams and imagination. In astrology, the moon is associated with feelings, emotions, and our inner world.

One of an October Scorpio man’s traits that makes him seem like a stereotypical Scorpio is his intensity.

His intensity is not “filtered” by anything else. He is who he is and that shines through in everything that he does.

When he’s in love, it’s going to be obvious. He’ll have eyes for his partner and nobody else. He’ll be extra persistent in his pursuit of romance as well. October Scorpios are highly ambitious.

October Scorpios can also be more obsessive. Their intensity comes through in all aspects of their life and they can sometimes be too intense.

Intensity might also be one of a November Scorpio man’s traits but he isn’t going to be as intense as an October Scorpio. He is likely to have a more dreamy quality to him that softens some of the intensity.

You won’t always know what a November Scorpio is thinking or feeling, even if you know him well.

Emotions are part of a Scorpio man’s personality whether he was born in October or November. The way Scorpio men channel their emotions and how they express them will differ based on which month they were born in.

Think of the planet Mars. The other sign this planet rules is Aries. You might not always think of Scorpio as a competitive sign but October Scorpios can be highly competitive

October Scorpios make everything into a competition. He’s ambitious because he wants to be better than everyone else.

Even flirting is a competition for him. If he sees somebody is interested in the same person he is, he’s going to do anything he can to show that he’s the better partner.

October Scorpios can also be more aggressive than November Scorpios. They are more likely to become angry when upset, not sad.

November Scorpios are more in touch with their emotions. They might hide them, just as an October Scorpio does, but not in the same way.

November Scorpios don’t cover up sadness with anger. They cover it up with nonchalance and apathy.

November Scorpios also know that sometimes, just letting your emotions out is better than keeping them in. They might be careful about who they show their emotions to but they show them more than an October Scorpio will.

The Scorpio personality is a magnetic one. October Scorpios are especially charismatic and good at drawing people in.

Something is alluring about an October Scorpio. You might not always know why you’re interested in him, you just are.

October Scorpios often know they are charming too. On the negative side of things, they are better able to manipulate people because of their charismatic nature.

November Scorpios are also charismatic but their charm has a different vibe to it. You’ll be drawn in without quite realizing it. November Scorpio won’t seem intense or overpowering.

November Scorpio seems more low-key and laidback. He has a mysterious aura to him but it’s a calmer one. You won’t feel as intimidated when you’re getting to know him.

This reserved nature can actually make him more dangerous than an October Scorpio in some ways. Again, you won’t realize he’s drawing you in. You’ll just feel relaxed with him, not overpowered. He seems calm, not intense.

A November Scorpio is more likely to forgive a betrayal than an October Scorpio.

Vengeance is one of Scorpio’s bad traits. He can be overwhelmed with the desire to get even with somebody following a betrayal. He may even do things he wouldn’t normally do in his quest for revenge.

This is especially true for an October Scorpio. He’ll stop at nothing to make sure that the people who hurt him feel just as bad as he does.

November Scorpios, on the other hand, are often able to separate themselves from their revenge fantasies. They still have them but they know acting on them won’t help anything most of the time.

The truth about Scorpio men is that they feel betrayal deeply. It hurts them more than it hurts other people.

The way they react following a betrayal might not be as intense as an October Scorpio but a November Scorpio will feel just as hurt.

An October Scorpio might cheat on his partner after she’s been unfaithful. A November Scorpio will just end the relationship because he knows there’s no point in dragging things on longer than they need to.

November Scorpios don’t forgive people out of the goodness of their hearts, though. They forgive people because sometimes that is what they need to do to make themselves feel better and move on.

Being secretive is just one of a Scorpio male’s traits. October Scorpios are just more secretive.

October Scorpios are sometimes secretive just for the sake of being secretive. They do it on purpose to seem more mysterious.

You might have an October Scorpio friend or partner who you think you know well. You’ll likely be surprised to learn all of the things they’re keeping from you!

November Scorpio has an aloof personality that hides his secrets for him. He uses humor to cover up his true feelings.

He could even outright tell you one of his secrets but, because you’re so used to his sarcasm, you might not think he’s actually revealing anything.

October Scorpios aren’t steady in the sense that they are calm. They aren’t at all!

However, you usually know what to expect from an October Scorpio, even if what you need to expect is the unexpected.

October Scorpios are Scorpios through and through. They are intense, sexual, magnetic, and charismatic. Think of every stereotype you know about a Scorpio. That’s what you can expect from an October Scorpio

Scorpio is also a fixed sign. Once you get to know an October Scorpio, he’s not likely to change drastically any time soon.

November Scorpios welcome change more than October Scorpios do. They use that power of transformation on themselves, rather than the world around them.

You might meet a November Scorpio and realize he’s become a completely different person after knowing him for only a couple of years.

The effect of Neptune and the moon on November Scorpios also make them unpredictable.

They might act in ways you wouldn’t normally expect from a Scorpio because they are being influenced by the planets that rule Pisces (Neptune) and Cancer (the moon).

10 Tips on How to Make a Scorpio Man HappyWho’s The Scorpio Man’s Soulmate?
Hello, I'm Liz