How To Make a Cancer Man Feel Guilty 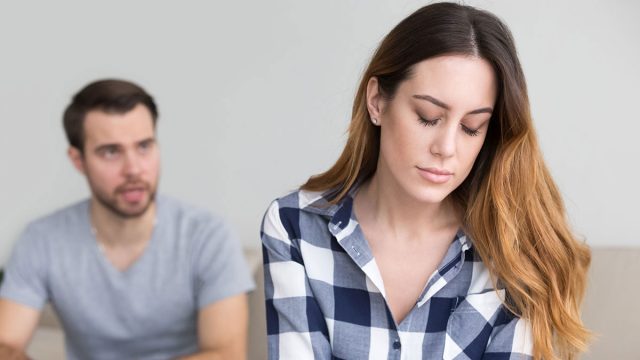 It’s pretty easy to make a Cancer man feel guilty. He’s a sensitive and emotional person, so you might not even need to try sometimes.

If your Cancer man hurts you and you tell him that he did, that might be enough to make him feel guilty.

If your Cancer man doesn’t feel guilty immediately, there are ways to change that! Make it clear that you are disappointed in his actions, and be direct about what he’s done.

If talking doesn’t work, you can try withholding affection or spending some time away from your Cancer man. He might feel guilty once he realizes how seriously he has upset you.

Tell Him What He Did

Do Cancer men feel guilty when they’ve hurt someone? The majority of them will immediately feel guilty. If yours doesn’t, sometimes telling him what he did is all he needs to feel that guilt.

Tell your Cancer man that he said something insensitive and hurt your feelings or that you don’t appreciate something he did to you.

Be as clear as you can be. Let your Cancer man know exactly what he did and how it made you feel. Most of the time, this is all you need to do to make him feel guilty.

What happens when you ignore a Cancer man after he’s hurt you? He might feel guilty or just assume that you need some time to yourself. Sometimes, you have to be direct.

Don’t beat around the bush when you’re telling your Cancer man he did something to hurt you. Don’t try to make things sound better than they are, and don’t let him off the hook too easily.

If he said something rude, directly quote what he said. Be open about why his words hurt you, and don’t try to spare his feelings. You’re trying to make him feel guilty! Don’t worry about being rude or making him feel bad.

If your Cancer man made you angry, tell him that. If he upset you so much that he made you cry, don’t hide that fact. Be honest with him and be as direct as possible.

Crying in front of a Cancer man is sometimes the best way to make him feel guilty. Don’t hold your tears back if he’s upset you! He’ll feel guilty as soon as he sees what he’s done.

If you’re angry with your Cancer man, express that anger openly. Don’t hold in any of your emotions if you’re sad or if your Cancer man has done something to scare you. Let him know exactly how you feel.

Seeing how he’s made you feel is sometimes all a Cancer man needs to feel guilty. If he cares about you, the last thing he wants to do is upset you. He doesn’t want to make you angry or be the reason you cry.

If you and your Cancer man have argued and you want him to feel guilty after, prioritize yourself. Take care of your needs instead of trying to deal with the argument.

A Cancer man might just expect you to forgive him after he’s done something to hurt you because he would probably just forgive you. He may also expect you to talk things over with him or even to take care of his needs after an argument.

Prioritize yourself, not him. Take care of yourself. If you’re feeling sad, practice some self-care!

Your Cancer man might see that you’re taking time for yourself and feel guilty over the argument. If he sees that you do not want to interact with him or work through things together, he might start feeling bad.

If you always prioritize your Cancer man, take some time for yourself. He might start to feel guilty for taking up all your time, and he’ll change his behavior.

A Cancer man fighting feelings of guilt won’t be able to do so for long if you constantly remind him of what he did to upset you.

Confronting a Cancer man after he’s done something to hurt you will make him feel guilty. Cancer men don’t deal with confrontation well. You’ll likely get what you want if you don’t back down.

Don’t wear a brave face if your Cancer man says something to upset you. Be as dramatic as you want to be. You do not need to hold your emotions back. The less you hold back, the more guilty he will feel.

Have Some Time Apart

If he’s messed up and you want to make a Cancer man regret losing you, spend some time apart from him. He’ll feel guilty over whatever he did if you take a break from the relationship.

Distancing yourself from a Cancer man is sometimes the only way to make him see how much he hurt you. If nothing else is working, then take some time for yourself.

If you don’t want to end the relationship entirely, you can still spend some time apart. Spending time away from him will help clear your head and make him feel guilty.

If you live together, stay with a friend for a few days. If you two normally see one another every day, let him know that you want to be alone for a while. Having no contact with your Cancer man for a couple of days might do the trick.

This works best if you tell him what he did and why you want some time apart. Knowing that you’re avoiding him because of what he did will make your Cancer man feel guilty.

Sometimes, leaving a Cancer man alone and withholding affection from him is the best way to make him feel guilty.

Some Cancer men will get the hint right away after they’ve done something to hurt you. If you talk things over with them, they’ll immediately feel guilty. Others might need to face the consequences of their actions first.

If your Cancer man is trying to pretend everything is okay after an argument, make it obvious that everything isn’t okay.

Don’t let your Cancer man hug you. Pull away if he tries to hold your hand. You might even want to sleep in a different bed or turn away from him even if you do sleep together.

Your Cancer man will notice something is wrong immediately, especially if you are usually very affectionate. If you withhold affection, he’ll realize that he can’t ignore the problem and feel guilty for whatever he’s done.

Will a Cancer man feel guilty after hurting you? He will eventually. If you tell him you’re disappointed in him, you may make him feel guilty quicker.

Tell your Cancer man that you expected more from him. If he made a careless comment that hurt your feelings, let him know how disappointed you are that he didn’t think before he spoke.

If your Cancer man forgot an important date like an anniversary, definitely express that disappointment!

Sometimes, disappointment is worse than anger or sadness. Your Cancer man will feel terrible for letting you down when he knows that you had high expectations for him and that he didn’t live up to them.

If your Cancer man avoids you after an argument or refuses to apologize, express disappointment in that as well. Let him know that you don’t appreciate the way he’s acting and that you expect better from him.

Ask For An Apology

Sometimes all you need to do to make a Cancer man feel guilty is directly ask for an apology!

If your Cancer man hasn’t apologized to you after an insensitive comment or an argument, he might not know that you’re expecting an apology.

If nothing else is working, you can also try this as a last-ditch effort. Directly telling your Cancer man that he owes you an apology is sometimes the wake-up call he needs.

Fortunately, most Cancer men have no problem apologizing when they need to. Your Cancer man will likely feel guilty for hurting you without you needing to do anything too!

Asking for an apology will make him feel guilty, and you’ll get the apology you want.

How To Make a Cancer Man Regret Losing You
Hello, I'm Liz