How to Flirt with a Libra Man through Text 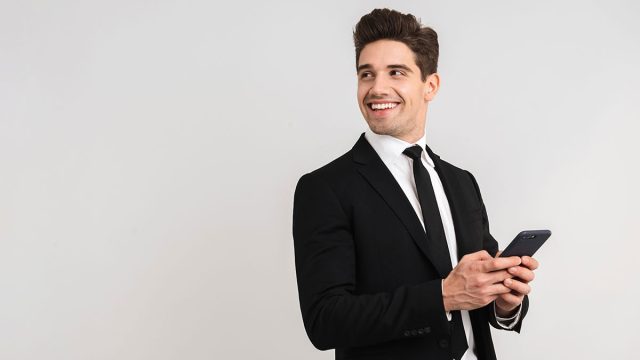 A Libra man’s text style mirrors his personality in general. When you understand his mentality, you can text him effectively.

If you know how to flirt with him through text, you’ll know how to make a Libra man obsessed with you.

It’s important to understand a Libra man’s texting habits. When you know how to handle a Libra man, you’ll be in a position to leverage your texts to get his attention.

Libra men usually love to communicate, but his moods can vary. You’ve got to look for the signs a Libra man has lost interest in you. Be careful to not push him too far.

When you show a Libra man you can be flirty, intelligent and fun through text, he’ll take a serious interest in you. You’ve got to know the common pitfalls to avoid.

Don’t Be Too Wordy

If you’re wondering how to know if a Libra man is playing you, try to keep your texts brief. A Libra man who only texts you when he’s interested in sex is not likely really into you.

Also, when you keep your text messages brief at first, it helps to encourage your Libra man to follow up with you. You’ll spark his natural curiosity. You’re also giving him space to pursue you and take initiative.

Libra men are intelligent and social, but they do enjoy friendly and flirty texts that are easy to digest. This also speaks to their love of shorter messages. It’s also a good way to tease a Libra man and drop hints that keep him wanting more.

Most importantly, when you keep your messages brief, a Libra man won’t feel overloaded or compelled to get into a lengthy conversation if he’s busy. He’ll like that you engage with him but respect his time and space.

You’re also giving him room to use his imagination more and Libra men love this. The fewer words you use (while being sure to clearly convey your meaning) the more he can fantasize about what happens next.

Capture His Attention with Photos

When a Libra man doesn’t answer texts, don’t chase a Libra man. As tempting as it may seem, resist the urge to continually text him. One exception to this is if you let some time go by and then send him a picture to get his attention.

Libras are artistic and visually oriented. When you use selfies or other photos to flirt with a Libra man through text, you’re sure to get a response. A picture can paint a thousand words and Libra men understand this better than anyone.

Send cute or sexy pictures of yourself. You can also send him pictures of beautiful landscapes, of art you’re working on, or other natural scenes or images that conjure beauty and romance.

Appeal to His Imagination

Along the lines of less being more, when you flirt with a Libra man through text, try to appeal to his imagination. Hint at the places you want to go with him. Suggest romantic getaways together as well.

The more you can tap into his imagination and get him to fantasize about the romantic evenings you’ll spend together, the more he will want to nurture his connection with you. Play to a Libra man’s vibrant imagination.

When you appeal to a Libra man’s imagination, you’re also encouraging him to think about you. This goes a long way with a Libra man. You’re blending his love of romance and his love of fantasizing about his ideals.

When you want a creative and unusual way to flirt with a Libra man through text, appeal to his love of romantic, sentimental music. Send him texts with your favorite romantic song lyrics.

Remind him of “your song” and text him a link to a video with this song. Send him a few lyrics to stimulate his sense of romance and desire. You can also set up a romantic playlist to use on your dates with him.

When you flirt with a Libra man through text, engage all of his senses. Making reference to his favorite romantic music and musicians is an easy way to do this. This will appeal to his desire for you and his sensual nature.

Be Friendly and Hint at Romance

One of the signs a Libra man is not into you is when he ignores or avoids any flirtation with you. If you text a Libra man as a friend and drop romantic hints, he should respond.

If he doesn’t reply, or if he goes out of his way to avoid copying your romantic or flirty tone, he’s not interested. However, if he reciprocates and shows you the same friendliness and flirtation, encourage him through text.

If you aren’t sure where you stand with a Libra man, try to keep your texts more friendly than romantic at first. Gradually make references to romance or insinuate your interest in him.

After some time goes by, he’ll pick up on your cues. A Libra man who is interested in you will begin echoing your flirty and romantic tone. He’ll likely even take it to the next level, becoming more seductive when he texts you back.

Don’t Be Too Overbearing

This is a good rule to keep in mind both when it comes to flirting with a Libra man through text, but also any interactions with a Libra man in general. Libras can be loving and compassionate, but they don’t like feeling overwhelmed.

If you are too intense or overbearing when you flirt with him, he’ll associate you with drama and he will try to avoid you instead of being receptive to your flirtations. Try to keep a casual, friendly and flirty tone at first.

As things get more serious, you can shift from friendly to romantic when you text him. Yet you’ll still want to take things slow. Don’t overload a Libra man with too many text messages all at once. Also, don’t try to address deep, serious issues through text.

Drop Hints, Then Let Him Chase You

The best way to entice a Libra man is to drop flirty hints through text, then let him respond. Libra men aren’t known for being passionate pursuers, they usually prefer an even balance of give and take in a relationship.

When you flirt with a Libra man through text, you can appeal to his desire for fun and games. Hinting around your flirtation and desire doesn’t have to just be about obscuring your passion. You can make flirtation into a game and appeal to his playful side.

Get the "love spell" to attract and keep your Libra man.

Draw on His Ideals and Fantasies

Libra men are among the most imaginative and idealistic of all the zodiac signs. Use this to your advantage. When you flirt with him over text, talk about your perfect date or desires for a perfect evening.

Encourage your Libra love interest to use his imagination. The more you can get him to fantasize about you, the better. If you initiate flirtation, do so in a way that encourages him to follow your lead. Leave room for him to use his creativity to envision what you’re talking about.

You can also draw on his desires for perfection. Flirt with him by projecting an image of perfection that matches with your Libra love interest’s ideals. It’s easy to tell what a Libra man envisions as the perfect date or perfect woman, if you pay attention.

Once you’ve got a sense of what he sees as the ideal, you can do your best to fulfill these desires. Show him through your text messages that you understand his dreams and that you are the woman who will make his dreams come true.

Be open, flirty, friendly and compassionate. Encourage a Libra man’s creativity and imagination. Don’t be afraid to push the boundaries a little from time to time. But the one boundary to never push involves his jealous reaction.

Whatever you do, don’t make a Libra man jealous. This will make him shut down or lose interest. He may assume you aren’t serious about the relationship and may also assume he’s wasting his time or that you are creating drama.

What does it mean when a Libra man stops texting? It can mean a variety of things. Before assuming it’s over, you’ve got to understand how to know when a Libra man is done with you. When he goes quiet, it’s not always the end.

When a Libra man stops texting, he may be hurt by something you said, but he won’t want to address this directly. He may be offended (he’s very sensitive to injustices). He may also be jealous because of your interactions with others online.

When a Libra man’s jealousy is triggered, he won’t want to get into a big dramatic confrontation with you. He may just assume you’ve chosen someone else. If there is any ambiguity, he may decide he doesn’t want to be involved in a triangle and back away altogether.

Libra Men in Relationships – What You Need to KnowHow You Can Attract a Libra Man at Work
Hello, I'm Liz