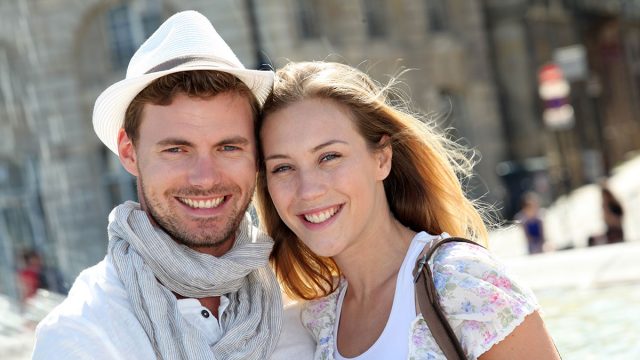 Libra man, Taurus woman compatibility requires some flexibility but can work. Both signs have the same ruler, Venus.

Both are romantic signs. But they express their love in different ways. If they find common ground, they can succeed.

Taurus woman, Libra man soulmates can make a friendship, romance or marriage work. They need to work around their differences. It can be hard for this pair to meet each other halfway at first.

Libra man, Taurus man attraction is based on each having a love of romance and beauty. They both love comfort, luxury and harmony. A Libra obsessed with Taurus can be flexible, making things work.

A Libra man obsessed with Taurus woman will try to engage in intellectual conversations with her. A Taurus woman attracted to a Libra man will want to spend hours talking to him.

Sometimes for a Libra man and Taurus woman it’s love at first sight. But other times, this couple needs to start out as friends. This pair can find a satisfying friendship and a solid connection. As friends, their differences aren’t as distracting.

A Libra man who is friends with a Taurus woman will love hearing her down to earth advice. He knows he can rely on her and may lean on her for guidance and support. A Taurus woman likes being a pillar of strength.

She doesn’t like being taken advantage of, though. As long as her Libra friend goes into his regular periods of detachment and distraction, instead of becoming too emotionally attached, things will work out. Otherwise, she may feel intruded on.

Libra men are conscientious and sensitive. If he does start to lean on her too much, a Taurus woman has a way of setting her boundaries, so others know she needs space. A Libra man will appreciate this. He won’t continue to push.

A Libra man will help a Taurus woman lighten up and see the best in others. He can help her see different sides of a situation and that is no easy task. Usually set in her ways, with a Libra man’s help, she can ease up.

The best thing about this pair as friends and not romantic partners, is they can enjoy their similarities and not get lost in jealousy. Taurus women have a possessive side. They expect consistency and honesty.

Libra men can be flighty. This isn’t threatening in a friendship, since their commitment and obligations to each other are minimal. Yet when a relationship becomes more serious, the stakes are higher and the intensity can be too much for them.

As friends, they have the best of both worlds. The commitment is lower and that takes the pressure off. A Libra man can be free to be himself and doesn’t worry that he may be rushed into anything.

A Taurus woman can relax because she doesn’t have to feel responsible to keep track of her Libra friend’s comings and goings. He may be forgetful, noncommittal and constantly change his mind. At most it will annoy her. But she will take it in stride.

If he’s serious about turning a friendship into a romantic relationship, the burden of adapting falls on him. A Libra man will have to make it a point to be more reliable. He likes to be a people-pleaser, but a Taurus woman can misread his intentions.

She may assume he is being deceptive if he isn’t direct and to the point with her. He will also follow his whims rather than following a schedule. This can be frustrating for a Taurus woman, especially if he’s late.

A Libra man is not always consistent at texting. Sometimes he will shower his Taurus woman with attention, but inevitably he will go quiet. She doesn’t know how to make sense of this and will become suspicious or jealous.

Yet if a Libra man is able to accentuate his romantic side and find ways to be give more steady attention to his Taurus woman, she will feel at ease. A Taurus woman needs to show leniency with her Libra man when he acts flighty.

The relationship can work. It just takes effort on the part of the Libra man and Taurus woman. Yet realistically, the Libra man will end up doing more compromising. Taurus women value themselves and sometimes view compromise as diminishing their worth.

Both partners love to be pampered and admired. Though this gives clear insight into what can make each other happy in a romance, it can also be a source of strain. A Libra man may need to accept taking care of his Taurus woman’s needs first.

She will repay his generosity and attentiveness, but he will have to get used to doing things on her terms. This is usually not hard for a Libra man. He likes to step back and let someone else be in charge anyway.

Though not as plentiful as other pairings, you can find examples of famous Libra man, Taurus woman couples. This pairing can succeed in romance and advance to marriage. If they find ways to harmonize and share the need for admiration, they’ll succeed.

A Libra man, Taurus woman breakup is usually the result of possessiveness or insecurities. Even when he’s sincere about his feelings, a Libra man intellectualizes his feelings. This can leave a Taurus woman feeling neglected.

He doesn’t go for deep emotional connection. Some Taurus women are practical enough to be fine with this. If a Taurus woman is grounded and confident, she can make the best of a marriage to a Libra man.

She can accept his dreamy, idealistic nature and lack of follow through. She’ll pick up the slack for him. It won’t frustrate her if she remembers that a Libra man balances her energy by bringing tenderness and optimism to the relationship.

In a marriage, a Taurus woman will happily take over responsibility for the budget, finances and the “business” of running the household. A Libra man will create an atmosphere of love and romance. He’ll help inspire her to succeed.

She in turn will help him to stay grounded and follow through on his creative dreams and interests. They may have shared interests in creating art or music as well. Both will try to balance practical obligations with romance and idealism.

A Libra man will show great compassion for a Taurus woman. He’s forgiving and flexible, there is little she can say or do that will upset him. Even when he does get hurt, he is quick to forgive. A Taurus woman is not so easily forgiving.

Yet a Libra man will go out of his way to avoid hurting her. By being conscious not to upset a Taurus woman, he will be able to keep the peace in the relationship. He may be the more diplomatic of the pair.

A Taurus and Libra in bed can excite and satisfy each other. The key to success in an intimate relationship between these two is their ability to make their intentions and boundaries clear. This is usually easy for a Taurus woman.

She is the Queen of Boundaries. She will let him know from the start whether she has feelings or is just interested in sexual exploration. It’s up to a Libra man to respect her boundaries. If he can draw on his detached, romantic nature, that shouldn’t be a problem.

Yet if a Taurus woman expects a sexual relationship to lead to romance and a Libra man isn’t feeling it, problems can arise. What could be a satisfying connection can become steeped in drama.

Taurus and Libra sexuality is based on hedonism and sensuality. Both Libra men and Taurus women love to savor sexual pleasure. Both love to be admired. Both will enjoy being wined and dined even if the encounter is just sexual with no strings attached.

For a Libra and Taurus, sexuality is an extension of a romantic relationship if one exists in the first place. If they are committed to each other in a romance, or married, they both expect to enjoy a healthy sex life.

Though she has high standards of perfection. A Taurus woman may insist on having her own needs met first. If she sees that her Libra partner is sensitive and attentive enough, she will return the attention he gives to her.

A Taurus woman may seem demanding in bed, but a Libra man is happy to go out of his way to satisfy her every desire. The sign of balance, he knows his efforts will be reciprocated. Neither needs kinky or adventurous sex to be happy.