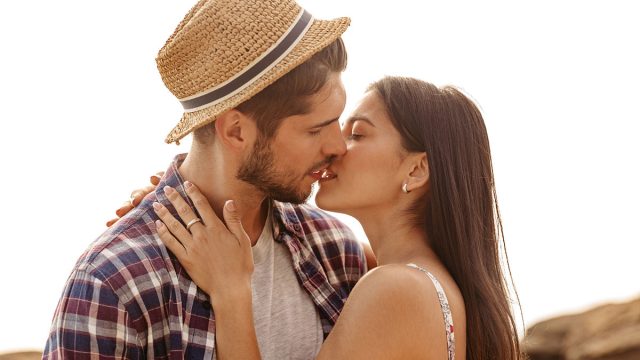 If you have strong feelings about PDA and are dating a Libra guy, you might wonder when it comes to a Libra man, is PDA something he craves or can’t stand?

Does he enjoy public displays of affection or not?

Physical touch is one of the common love languages and some zodiac signs like it more than others.

Some need public displays of affection and physical contact with their partner to feel loved, while others abhor PDA and like to have personal space.

By learning more about his sign, you can discover if your Libra man likes public displays of affection, or if he’d rather you keep your hands off of him in front of others.

Each zodiac sign has a ruling heavenly body that explains something about that sign’s personality. Libra’s ruling planet is Venus, the planet of love and beauty.

This means that Libras are one of the most loving and affectionate signs of the entire zodiac. They enjoy physical affection and need it to feel safe and adored in a relationship.

They also use it as a way to flirt and show they like you. When a Libra man is interested in you, he will find ways to be physically close to you.

If he stands or sits right next to you, brushes hands when passing you something, or looks for excuses to hug you, it’s one of the signs a Libra man has a crush on you.

Even a shy Libra guy will find reasons to touch you, like giving you a high-five or brushing a stray hair out of your face.

One of the characteristics of a Libra man in love is that he wants to snuggle and hold hands with you all the time.

If your Libra guy can’t get enough of your touch and always seems to crave more, it’s one of the sure signs he caught feelings.

Although they enjoy public displays of affection, a Libra man likes PDA the same way he likes anything else: in moderation.

Each zodiac sign has a unique symbol, typically an animal, that conveys something special about that sign’s personality. Libra is the only zodiac sign with an inanimate object as its symbol.

Libra’s symbol is the scales, which reveals that Libras strive for balance in everything they do, even public displays of affection.

A Libra guy is comfortable with most forms of PDA, but he draws the line at anything too showy or vulgar. Libras like sweet and romantic affection, not aggressive or sleazy PDA.

He will kiss you sweetly in public, but he might not go for a full makeout session. He’ll hold your hand when you walk down the street together, but he won’t grab your butt when you’re out at a bar.

Libras have sophisticated and elegant tastes, and they would rather show how refined you are as a couple than what a sexy pair you make.

They might be gregarious and flirtatious, but those born under the Libra zodiac sign are not ostentatious or overtly sexual in public.

You can trust your Libra guy to be a gentleman and not do anything crass in public to show his love for you.

They Care What Other People Think About Their PDA

Libras are perhaps the most socially conscious of all the zodiac signs and they care a great deal about what other people think.

Because they are so invested in appearances, you could even accuse a Libra guy of being shallow and superficial. It’s one of the most common Libra weaknesses.

If your Libra man thinks the people nearby disapprove of PDA, he won’t kiss you in front of them.

It’s not that he’s ashamed of you, he just doesn’t want to embarrass you or himself, and he wants everyone to think highly of him.

If you want a partner who doesn’t care what other people think, a Libra guy isn’t right for you.

But if you want a guy who knows how to read the room and adjust his behavior accordingly, then a Libra man is your perfect match.

They Are Considerate About PDA

Libras are generous and selfless when it comes to their friends and loved ones, and they never want to be rude or hurt anyone’s feelings.

If your Libra guy normally hugs and kisses you in public but hesitates in front of certain people, it’s because he’s being considerate of their feelings.

Your Libra guy is sensitive to others and goes out of his way to make everyone around him feel good.

If he knows the friend you are both hanging out with is going through a difficult breakup, he’s not going to act lovey-dovey with you in front of them.

He’s not putting someone else’s feelings first or prioritizing other people before you. He is just being polite and thinks it’s fair to wait until you are alone together to show you some affection.

Libras can be fickle and hard to read because although they enjoy PDA, they don’t want it all the time.

When he occasionally pushes you away when you try to kiss him in public, don’t assume that it’s one of the signs a Libra man is not into you.

He might just not be in the mood and is craving a little personal space. It doesn’t mean he’s mad at you or losing interest in you.

If you’re not sure what to do when a Libra man pulls away, don’t push it and try even harder to show affection. The more you persist, the more uncomfortable and aggravated he will become.

Although a Libra man is quite loving and affectionate, he is attracted to an independent and self-confident woman. He doesn’t like it when a girl is too needy and clingy, including with public displays of affection.

When you hang all over your Libra guy in public, it makes him feel suffocated and he will try to get some space.

If it’s obvious that you are using PDA to show possession because you are jealous and insecure, it’s a huge turn-off for your Libra man.

Libras like a fair amount of PDA, but don’t go too far and be clingy or proprietorial. Make sure to give your Libra guy a little room to breathe even when you are feeling amorous in public.

They Feel Hurt When You Reject Their PDA

A complicated aspect of PDA with Libras is that although they will occasionally spurn your public affection, they get really sensitive and uptight when you do the same.

If you want to keep a Libra man, you have to be comfortable with at least a little PDA.

When you constantly push him away and reject his affection, especially in front of other people, it makes him feel hurt and embarrassed.

If you want to know how to make a Libra man obsessed with you, accept his public displays of affection, and reciprocate them.

Let him kiss you on the cheek, then turn around and embrace him in return. If he wants you to hold his hand, go ahead and do it, even if it’s sweaty and clammy.

Libras need affection to feel loved, and they fear public humiliation more than anything. You can easily keep a Libra guy happy by getting comfortable with the occasional PDA and showing him affection in return.

They Don’t Use PDA to Show Possession

Those born under the Libra horoscope sign aren’t particularly jealous or possessive. Don’t expect him to throw his arms around you to mark his territory when you are talking to another man.

Libras are social and easy-going, so seeing you with another guy isn’t a big deal to a Libra man, as long as it doesn’t seem like you are flirting or attracted to him.

He’s perfectly happy to let you have male friends and won’t ruin your fun by acting jealous.

Also, Libra men are notorious flirts. He has probably gotten in trouble with you or other partners in the past for acting a little too friendly with other women, even though he doesn’t mean any harm.

He would never be unfaithful to the woman he loves, but he’s a natural charmer and can’t help but come off as coquettish.

A Libra guy realizes that using PDA to show possession would be hypocritical because he hates when his partner does it, and he knows that he can be a bit of a flirt, too.

If you wish your Libra guy would be just a little bit jealous to show how much he likes you, don’t expect him to show it through physical touch.

It’s not in his nature to cause a scene or make anyone else feel uncomfortable, not even by acting territorial with public displays of affection when he gets jealous.