What does a Libra Man Do When He Likes You? 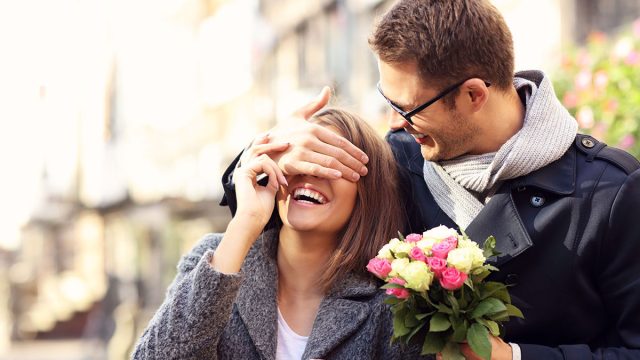 When a Libra man likes you, it can be hard to tell at first. He’s friendly and flirty with everyone.

Yet if you get to know his personality, you’ll be able to tell when he wants to be more than friends.

Some common patterns you’ll see are his increased interest in spending time with you. Slowly, he’ll start to become more confident. He’ll act like your sidekick.

Even if he is still just a friend, he’ll always want to do things with you and spend time with you. Eventually, he’ll go from flirty to full blown romantic and make his feelings known.

If you’re wondering how to know if a Libra man likes you through text, pay attention to how often he texts you. When he texts frequently throughout the day or holds long conversations with you, he likes you.

You may think at first that he’s just really into a particular conversation. But a Libra man won’t text excessively just because he’s bored. He’ll only put that much energy into texting if he really likes you and wants to engage with you.

It’s his way of finding out how you think and what is important to you. Texting a Libra man is a great way to captivate his interest early in a relationship. It’s low pressure and encourages him to use his imagination.

When you spend time texting a Libra man, let him initiate more often than not. If he does, it’s a positive sign that he likes you. Don’t chase a Libra man. If he likes you, he’ll make the effort to reach out.

He’ll Talk to You for Hours

Signs a shy Libra man likes you are similar, except he will take longer to pursue you. When he likes you and has gotten comfortable texting you frequently, he’ll switch to calling. He’ll easily open up about his day and all of his idealistic dreams.

He’ll want to talk for hours about everything he can think of. You may wonder if he likes you, because as talkative as he is, he’ll be reluctant to step up to the plate. He may be slow to actually ask you out.

A Libra man uses this phase to get to know you with no pressure. He’s using conversation to get a feel for your likes, dislikes and opinions on numerous topics. Libra men are idealistic. They can be perfectionists.

When he likes you, he’ll try to assess your personality and values. He’s looking for commonality and differences. If he reaches a stumbling block, he may talk himself out of the relationship, even if he really cares about you.

That’s because Libra men are notorious for being ambivalent. Even when they want to be with someone, they will try to find reasons it won’t work out. They can talk themselves into and out of love when they’re getting to know you.

If you’re wondering how to know if a Libra man is playing you, take note of whether he only wants to talk about sex. A Libra man who won’t discuss other topics is likely not that interested. He may flirt but if he likes you, he’ll discuss various topics.

One of the signs a Libra man is not into you is if he acts closed off around you. If he’s closed mouthed about his fantasies and dreams, he may not trust you yet. When a Libra man likes you, he’ll share his bigger dreams.

In addition to talking about his future plans, a Libra man will also talk about his actual dreams. He’ll show enough vulnerability to open up to you about his intuition and instincts. He’ll share the dreams and ideals he normally hides from others.

Libra men are sensitive to the ways they are judged by others. If a Libra man has a big dream or ambitious desire, he won’t share it with just anyone. He doesn’t want to be told he’s not practical. When he likes you, though, he’ll let his guard down.

When he starts to open up about his dreams, it is a sign a Libra man sees you as his ideal opposite. He knows you won’t judge him or shoot down his ideas. This is a sure sign he likes you and values your opinion.

What kind of women do Libra men like? It can depend on the individual personality of a specific Libra man. Yet generally, Libra men are drawn to women who balance out their energy. Such as a woman who is decisive.

When he sees your assertiveness as confidence and ambition rather than judging it negatively as being too “aggressive,” it’s a sign a Libra man likes you. He may even compliment you on this trait.

He’ll find other reasons to compliment you as well. When a Libra man openly admires your intelligence, beauty, grace, intellect, sense of humor or any other traits, it’s a sign he likes you. Libra men are friendly by nature.

Yet they love to build up positive feelings. When a Libra man goes out of his way to say nice things about you, it’s a good sign he really likes you. He certainly won’t criticize a woman he cares about. He’ll see the best in you.

He may even go to the extreme of idealizing you and only seeing your strengths. He may overlook your challenges or weak spots. A Libra man who likes you will praise your talents and compliment you generously.

He may even go as far as bragging about you to others and telling others how talented, smart and beautiful you are. He’s drawn to beauty and art, so expect him to compliment your appearance when he likes you.

He’ll Want to Spend Time with Only You

One of the signs a Libra man is falling in love with you is that he will want to be with you all the time. As the sign of partnership, he will come to see you as a pillar balancing his own energy.

He’ll want to be your constant companion. Even in this regard, he does waver back and forth. As the sign of the scales this is natural for him. Yet he’ll want to be with you more often than not.

When a Libra man likes you, he will want to be by your side even when there is nothing special going on. From grocery shopping to cleaning, he may want to do errands with you, just to be in your company.

Don’t chase a Libra man. When he likes you, he may be slow to respond if he’s shy. Yet he will reach out to you. He will make the effort to be around you.

One of the basic ways a Libra man will do this is to ask your advice. When he shows interest in your thoughts and opinions, a Libra man is giving subtle signs that he likes you. He’s striking up a conversation, for starters.

Also, he is trying to get your point of view. If he didn’t respect your opinion and value your insights, he would ask other friends or research the topic on his own. When he asks for advice, he’s asking you to reflect back your perspective.

This is a big part of how a Libra man learns. He doesn’t always trust his own ideas and instincts. When he asks you a question or seeks your opinion, he’s either looking for validation or looking to be challenged.

He’ll Flirt with You

When a Libra man flirts, it’s a sign he likes you. He flirts openly with many people, so this is not always a sign he’s ready to commit to a serious relationship. Yet he wouldn’t do it if he didn’t have an interest in you.

When a Libra man flirts, he’s showing some level of attraction. It’s important to pick up this cue that he likes you but also to not get too far ahead of yourself. He doesn’t commit easily in relationships.

Though this is a positive first step, it’s a sign that he sees you as potentially being the kind of woman he wants to spend more time with. There is still a process he needs to go through in order to feel comfortable with you and fully open up.

In a similar vein, when a Libra man likes you, he’ll start to inch toward romance and more serious relationship. He won’t pour his heart out to you. He may be traditional in the way he courts you for example.

He will also drop hints about romance and serious relationships. He does this to safely gauge your thoughts on romance and commitment. He may play it off like he’s not ready to get serious. When he does become serious, he will show it.

He’ll be more consistent about his discussions of being exclusive. He’ll talk about what you want in a relationship. He’ll reveal more about what he wants as well. He won’t be as subtle over time. At first, he may be vague.

Initially, he may act as if he isn’t serious or is just testing the waters. This is still a good sign that he likes you. If he wasn’t interested, he wouldn’t put even this much effort into talking about romance and relationships.