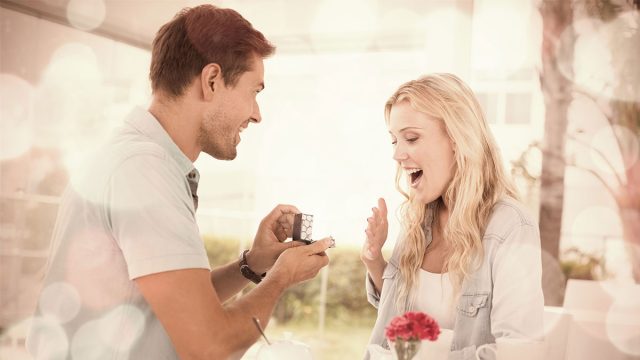 To understand a Libra man’s best match for marriage, you need to understand the Libra personality.

As the sign of the scales, he needs a romantic woman who appeals to his intellectual side and balances his personality out.

Who should a Libra man marry? Ideally his perfect partner is someone who is intellectual like he is. Usually this trait is prominent among the other air signs.

A Libra man’s best match for marriage is someone who is on his level as far as intelligence, but who is able to introduce him to new ideas. He needs a social, independent partner.

Libra compatibility for marriage requires the ability to be romantic but self-sufficient. He will marry a woman who can give him space but also be his companion when he wants connection.

Who should a Libra marry? The best match for a Libra man is an Aquarius woman. She is independent, individualistic but also has a strong sense of social responsibility. Her independent nature balances his need for partnership.

An Aquarius woman’s consideration for social change and progress also appeals to a Libra man’s interest in justice and promoting progressive change. They can make an ideal activist couple.

In addition to sharing interests in the common good and humanitarian causes, both are creative. Libra men are artists and Aquarius women are innovators. An Aquarius woman will introduce a Libra man to new ways of thinking and looking at the world.

He’ll feel refreshed by this and will be enthusiastic about the prospect of turning their life together into a creative adventure. Both are social and outgoing and that keeps a Libra man in his comfort zone.

Aquarius women can be romantic and affectionate, but they also break all the rules. This keeps the excitement going because a Libra man will never get bored around an Aquarius woman who is constantly reinventing herself.

Aquarius women try to be fair minded and can see the bigger picture. This appeals to a Libra man who doesn’t like to get lost in petty details and appreciates someone who is concerned with fairness.

Aquarius women are also highly intellectual and are likely to know a lot of information about a vast array of subjects. Libra men love this. A Libra man will want to constantly talk to and learn from his Aquarius partner.

In addition to an Aquarius woman, a Libra man’s best match for love can also be found in a Gemini woman. A Libra’s compatibility with Gemini is based on the similarities in their personalities.

A Libra man loves to take different perspectives so he can understand a situation from every possible angle. He wants to ensure a fair evaluation of a situation before making a judgment. Gemini women think in a similar way.

A Gemini woman is mentally flexible and can easily shift perspectives. Where many women may see a Libra man as indecisive and flighty, a Gemini woman will see him as intellectual and adaptable.

Neither of them will sweat the small stuff in a relationship. Gemini women are always thinking and their desire for intellectual stimulation will lead them to jump from topic to topic. As a result, they never hold a grudge and don’t get too emotional.

Libra men are fine with this. He can be romantic and sensitive, but a Libra man doesn’t want to be flooded with emotions. A Libra man and Gemini woman will constantly introduce each other to new ideas and perspectives, and this will keep them both from getting bored.

Libra men value fairness and justice. Gemini women can consider various perspectives and learn important lessons about fairness from a Libra man, though they don’t have the same motivation to create harmony.

Gemini women are excellent communicators, and this works well for a Libra man. He’ll want to express his ideas, but he also doesn’t want to rock the boat. A Gemini woman is diplomatic, and this helps a Libra man open up.

When you understand a Libra man’s best and worst matches, you’ll see that in addition to the air signs, he is compatible with most fire signs. This is particularly true for a Libra man and Sagittarius woman.

This is so that a Libra man can balance his perspective and energy by spending time with different friends. Many women don’t understand this and become jealous or feel rejected. Not a Sagittarius woman. She has a lot to keep her busy.

She doesn’t need constant reassurance from her partner and that suits a Libra man just fine. While a Libra man is romantic and sensitive, a Sagittarius woman is encouraging and inspiring. She can bring him out of his shell easily.

As a married couple, a Libra man and Sagittarius woman may travel the world together. Sagittarius women have a restless, wandering spirit and Libra men love to encounter new people and places.

When will a Libra get married? When he truly feels that he has found his ideal partner. Someone who matches his integrity and respects his occasional need for space. Someone who is as optimistic as he is. He finds these ingredients in a Sagittarius woman.

If you’re wondering which zodiac sign should Libra marry, you can’t rule out the compatibility with Libra women. This match can be unpredictable. Libra men need some polarity. His ideal spouse is someone he can relate to but who is not exactly like him.

A Libra woman can be his ideal match if she can balance out his personality with her own. Yet there can be conflicts with this match. Libra men are indecisive and can have great ideas but poor follow through.

A Libra woman who also struggles to focus and be assertive may not be in a position to encourage him to follow through on his goals. Both can be procrastinators.

Also, both are big dreamers. When it comes time for boring things like paying bills or repairing the house, neither will be particularly motivated to deal with these details. Both would rather deal with intellectual matters and avoid practical hassles.

Both are idealistic and can see the best in others, yet a Libra man may occasionally need a partner who can point out red flags that he should pay attention to. A Libra woman may miss these if she too is stuck in an illusion.

A Libra man and a Libra woman can have a fulfilling relationship if each of them can find a way to take turns steering their partner in the right direction. If one of them is more focused, for example.

This way they can avoid getting stuck in a rut when it comes time to focus on something other than romance and fantasies. Both can have great ideas but one will need to provide motivation to make these dreams reality.

Both can be sensitive and considerate but one of them will have to be more assertive at times. Otherwise both the Libra man and Libra woman can become aimless and waste time and energy on things that aren’t productive.

When it comes time to do some heavy lifting in the relationship, especially when it comes to dealing with unpleasant realities, one of them will need to step up to the plate. Otherwise both can become distracted.

Both can be passive and will wait for the other to set the tone. They need to be able to find some polarity or else the relationship will not work to it’s full potential.

On that note, the perfect polarity for a Libra man is provided by the zodiac sign that is literally his opposite. An Aries woman. Aries and Libra are opposite each other on the zodiac wheel. Their relationship is truly a matter of opposites attracting.

This can make an Aries woman the ideal marriage partner for a Libra man. At least, sometimes. The key to compatibility between Libra and Aries lies in their willingness to work to understand each other.

This can fascinate a Libra man and motivate him. Aries women are naturally feisty and motivated. The key is, both need to work to meet each other halfway. If they can stretch outside of their comfort zone, this can be a winning marriage.

However, their personalities are very different from each other. An Aries woman is self-focused and views the world from the lens of what she needs. She is ambitious and for better or worse, she thinks of herself first.

A Libra man balances her energy because his focus is naturally partnership oriented. He seldom thinks only of himself and may have a hard time understanding how one can be ambitious if it means disregarding someone else’s perspective.

He needs the balance she can provide but will have to understand that she thinks differently than he does. If a Libra man expects an Aries woman to think like him, conflict will ensue.

Speaking of conflict, a Libra man craves harmony and peace. Aries women can be dominating and demanding. If he has no problem letting her take the lead, everything can work out. If not, the drama and intensity may be too much for him.

If an Aries woman can come to understand why a Libra man needs balance and harmony, the relationship can work. If not, she may see him as being indecisive and this can frustrate her.

How to Avoid Making a Libra Man Break Up with You10 Signs a Libra Man is Ready to Commit
Hello, I'm Liz