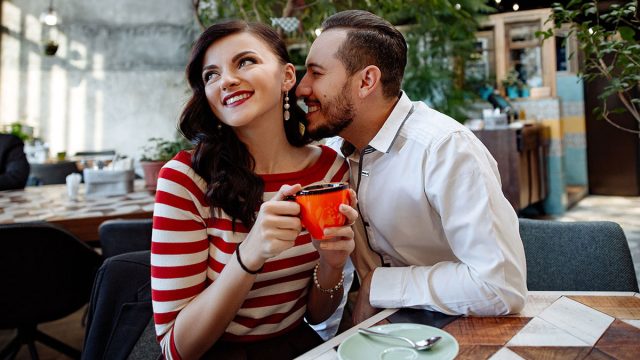 For a Libra man and Aries woman, compatibility is literally a matter of opposites attracting. These signs lie opposite each other in the zodiac.

Thus, they are the ideal signs to harmonize each other. They complement each other’s strengths.

A Libra man obsessed with an Aries woman to feel he’s found the one. Libra men crave harmony but can be indecisive. Aries women are ambitious, assertive, decisive and focused.

Put another way, an Aries woman is everything a Libra man is not. He will look to her to balance his own personality. Each partner to see the world in a different way.

A Libra man is not always assertive. An Aries woman is dynamic, assertive and willing to take risks. She may be the one to initiate, but a Libra man will follow her lead.

A Libra man is attracted to an Aries woman because she is confident, decisive and strong willed. First, he will be drawn to an Aries woman as a friend. Many Libra men actually use friendship to screen for potential romantic partners.

An Aries woman will definitely pass this test. She is independent enough to not crowd him. She is also likely to be exciting, adventurous and as outgoing as he is. She may be more passionate, and this helps him decide to follow her example.

For an Aries woman, the friendship can prove exciting but also balancing and grounding. For a Libra man, this friendship provides a charge of energy and courage to help him break new ground when he’s becoming complacent.

A Libra man will help an Aries woman see things in a new way. This is no easy task, as Aries women can be single minded and stubborn. Yet Libra men are gentle and compassionate. He knows not to confront her directly.

A Libra man will instead know just the right way to tiptoe around an Aries woman’s defenses. Both respect each other’s boundaries and are too independent to be clingy or emotionally overwhelming and this is reassuring to both Aries and Libra.

An Aries woman can be confrontational compared to a Libra man, but she senses that he is passive. She knows she doesn’t have to come on too strong. As friends, she may see herself as his protector and he rewards her with kindness and loyalty.

A Libra man will know how to soften an Aries woman’s temper. She may be quick to argue with most people, but she will seldom argue with a Libra man. He knows just how to diffuse her temper.

If you’re wondering how to know if a Libra man likes an Aries woman, it’s not hard to discern. A Libra man will set his sights on an Aries woman and find reasons to spend time with her. Even as friends first, they will soon form a romantic relationship.

An Aries woman will make sure of this. Though a Libra man can be slow to open up, an Aries woman is not known for patience. She will help elicit a Libra man’s true intentions if he really doesn’t want to lose her.

Libra man and Aries woman famous couples are prevalent as this is such a strong combination. Libra men need a partner who is decisive and passionate. No one is more passionate and dedicated than an Aries woman. They are each other’s ideal partner for romance.

An older Libra man and younger Aries woman can further balance each other’s energies. For the Libra man, age and wisdom are needed for him to feel more secure about relationships in general. When he’s older, he is more committed to settling down.

For a younger Aries woman, the age difference will hardly matter at all. She is ahead of her time, mature and ready to take on the world. Her energy and enthusiasm can help both she and her Libra man achieve their goals.

After an Aries woman and Libra man breakup, it may not be the end of the relationship. It’s typical for a Libra man to vacillate on his commitments. He may need time to feel fully ready to settle down.

An Aries woman may go quiet for a while because she gets bored easily and is restless. Yet something magnetic continually draws this couple back together again. They can seldom leave each other alone. A Libra man can’t resist the charm and determination of an Aries woman.

An Aries woman also knows on some level that she needs to be anchored by fair minded, level Libra. Even an Aries woman hurt by a Libra man can’t stay mad for long. Libra men know just how to diffuse tension in the relationship.

It’s only natural that a couple as compatible as a Libra man and Aries woman would move in the direction of marriage before too long. When married, a Libra man is loyal and faithful. An Aries woman is dynamic and passionate.

He never has to worry about losing interest or becoming bored because an Aries woman is active, adventurous and daring. A Libra man will let his Aries wife make the important decisions and that suits her.

He will call for balance and harmony, so if he feels his Aries spouse is going too much to extremes, he’ll help bring her back to center. She appreciates this. Thus, this couple can maintain balance in the relationship because of their complementary gifts.

An Aries woman may break ground and help initiate change when it is needed. Her Libra man will tend to the aesthetic details. She may assertively bargain for the best deal on a new home and he will decorate it and make it comfortable.

She will fight to protect her home and family from criticism or danger, and he will use his diplomacy to create a more nurturing atmosphere. He can soothe her high strung nerves and she can keep him from becoming complacent.

An Aries woman will speak up for her needs in the marriage, whereas a Libra man will listen but won’t always state how he feels. He never wants to rock the boat. She’ll assume he’s in agreement. This leads to conflict and resentments.

Yet even these conflicts can be short lived. As soon as a Libra man sees that his silence is creating a cycle of self-pity, he’ll stand up for himself and assert his needs. He does this by taking a cue from his Aries partner.

An Aries woman will help a Libra man find greater confidence through their sexual connection. She brings passion and enthusiasm to the partnership. He brings gentleness and sentimentality. An Aries woman may be in a hurry but Libra has a way of slowing her down.

A Libra man has a romantic side and is in love with beauty and pleasure. This excites his Aries partner. She may be open to trying new things and he will never get bored. She is always introducing him to new techniques.

An Aries woman is determined and passionate. She may be eager to please her Libra man. This is not difficult because he will want to accentuate pleasure and connection. He will put her needs first. Aries women are impulsive, and she appreciates his attention.

Libra and Aries in bed know how to harmonize intensity with romance, pleasure and adventure, love and excitement. This couple knows just how to excite each other’s fantasies and fulfill each other’s desires. Ideals and actions combine in this couple and sparks can fly.

For a Libra man and Aries woman, sexuality is an extension of romance and connection. A Libra man needs to express his sexual ideals and fantasies through intimacy. An Aries woman needs to feel she can show her passion and affection through sexuality as well.

An Aries woman’s intensity in bed can overwhelm a Libra man. He encourages balance, cooling off an Aries woman at times in order to slow the pace. This way, a Libra man and Aries woman can help each other maintain balance in their sexual relationship.

A Libra man can bring greater imagination and artistic sensibilities into a sexual relationship. An Aries woman can bring raw passion and energy to the encounter as well. They can both find ways to help each other become more confident in bed as well.