How to React to a Leo Man Silent Treatment 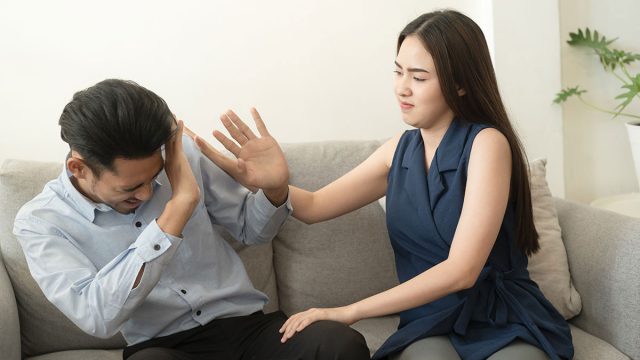 Nothing is worse than being on the receiving end of Leo man silent treatment. It can feel devastating when a Leo man gives you the cold shoulder.

Yet knowing how to react can make all the difference between a Leo man coming back or not.

A Leo man not responding to texts can leave you feeling confused and hurt. Yet there are a number of reasons a Leo man goes silent. You’ve got to know how to react to do damage control.

Regardless of why a Leo man pulls away, there are a few things to keep in mind if you want to keep him interested in you in the long run. Leo men are independent and love strong women.

If you act clingy or demanding, he’ll shut down for good. Yet if you entice him back by showing your strong, confident and attractive side, he will chase you again.

A Leo man who goes quiet isn’t always showing Leo man silent anger. He may just be busy or feeling burned out. The best thing to do when he goes quiet is to give him some time. If he comes back on his own, you know he was probably just busy.

Yet if he remains quiet after some time has gone by, you may have to change strategy. Regardless of his reasons, one thing is for certain. He felt the need for space. It’s essential to not encroach on him or else it will drive him away even more.

A Leo man who has stepped back from a relationship is sending a signal that he is not feeling fulfilled. He’s either not getting enough attention or not feeling like the relationship is helping his status or reputation. Take advantage of his silent treatment to build up your own confidence.

Give him space, and as you are taking a break from talking with him, divert your energy and attention into building up your own life. Boost your confidence. Schedule fun, enlightening and uplifting things to feed your own soul. It may take time but he will notice.

Break the Ice with Humor

If you’re seeing signs a Leo man has lost interest, try to break the ice with humor. Leo men can’t help having a soft spot for anything funny or entertaining. Send him a text with a joke that will appeal to his sense of humor.

Whatever you do, don’t make a joke at his expense. This could potentially make things worse. Instead, use self-effacing humor or humor that will in no way offend him. Leo men can open up when they are feeling relaxed and there is no better way to get him in a social mood than to make him laugh.

Even if you send him a text or message with something silly, such as a meme from social media, it may be enough to get his attention and break the ice. The only time to avoid using this as a strategy is if you’ve just had a major fight.

You want to make him laugh but you don’t want to give him the impression that you aren’t taking the situation seriously. In almost any other situation, though, use humor to encourage him to reconnect with you when he’s been quiet.

It’s best not to chase a Leo man. If you don’t hear from him in a while and you decide to check in, keep it brief. A few words to let him know he’s on your mind or a quick question can suffice.

If you send him blocks of chunky text, it will be a major turn off. Your goal is to make responding to you as easy and enticing as possible. If you text him something longwinded and complicated, it will require too much of his effort and attention.

This will only potentially lead to more delays. You want to entice him by sending an interesting text that warrants a response such as a question. At the same time, keep it brief so that you aren’t placing too many demands on his time.

How does a Leo man test a woman? Sometimes he steps back and gives the silent treatment as a means of seeing how you handle space in a relationship. If you panic and melt down emotionally, you’ve failed the test.

When faced with a Leo man silent treatment, don’t get emotional. Remain level headed and don’t read more into the situation than is necessary. He may just be busy. If he’s upset with you, he usually won’t keep it a secret.

Even if he is angry or upset, the best thing to do is give him space to calm down and reserve your own emotional reaction anyway. You may think that pouring your heart out to him is the way to go but this is not the case. Leo men can feel suffocated when a woman does this.

When you are with friends and enjoying yourself, it naturally boosts your attraction energy. This is especially true when a Leo man is concerned. Even if he is not around, the more you socialize with other friends and then post about it online, the more it appeals to his sense of longing for you. This is because Leo men are status conscious.

If you are keeping busy and spending time with friends, it gives him the impression you are popular. The more popular you are, the more desirable you are to a Leo man.

This is an important strategy when you want to entice him to reconnect with you. Though you may be tempted to pursue him directly, you will actually get more leverage out of keeping yourself busy by spending time with other friends instead.

When a Leo man is done with you, he won’t be shy about letting you know it. Yet if he’s just gone quiet, there are some things you can do to entice him to reconnect with you. When you show an interest in the arts or in music, you are appealing to his interests.

Take an art class, drama, writing or music class. This can help encourage a Leo man to reach out to you. He’ll become curious about the talent you’re developing. Leo men are drawn to creative women.

He’ll want to be there to nurture your talents and be part of your artistic awakening. He may also want to compare notes as Leo men tend to be artistic and creative as well.

No matter what, keep busy when your Leo man goes silent. The last thing you want to do, besides chasing him, is to sit on the edge of your seat waiting for him to respond to you. Pick up a new hobby, socialize with friends, catch up with family, start a business or hit the gym.

No matter how you’re spending your time, if you devote energy into self-improvement and socialization with others, you’ll be doing all the right things not only for your own growth but to help you attract your Leo man again.

This also gives you a chance to bring your attention away from him and back to yourself. If a Leo man is going to miss you and notice your absence from his life, then being busy with other hobbies, friends and interests is the best way to facilitate this shift.

Check in with a Question

If you haven’t had an argument or falling out and everything has been going well but a Leo man suddenly is distant, it may be that he’s just gotten busy. The best thing to do is wait a bit then check in with him. Ask him an innocent question.

Don’t confront him or accuse him of being cold or abandoning you. Simply ask a question that warrants his response. Ask his advice, or ask about an interest of his. Asking about his feelings can backfire so it is best to keep your inquiry neutral.

The goal is to give him a reason to respond more urgently while also playing to his interests or his ego or both. Make him feel important by asking a question that only he can answer based on his unique talents or knowledge.

A Leo man not giving attention may make you tempted to send him a long text explaining how much you love him and need him in your life, but this will backfire. Don’t act needy with a Leo man. Instead of bombarding him with questions or messages, give him space.

Then keep yourself busy doing things that improve your own life. This will make him naturally curious about you. He’ll want to seek you out and find out what you’ve been up to. If you’re making headway toward important goals, he’ll be impressed.

He’ll want to be around you because you are independent, successful and popular, not when you are acting emotionally vulnerable. As passionate as Leo men can be they don’t like dealing with sensitive emotions.

Does ignoring a Leo man work? Often, this is the best way to tempt him to come back to you. The key is to ignore him until he starts initiating contact again. If you ignore him after he reaches out to you, he’ll take it personally.

He may end up feeling insulted if you do this, so you don’t want to make him feel rejected. While you are taking a break from trying to get his attention, look at ways you can spruce up your wardrobe.

Give yourself a style makeover. Do it for you, not primarily for him. A Leo man taking notice and being tempted to reach out to you is merely a convenient side effect of making this move to improve how you feel about yourself. Will a Leo man come back? If he sees you as successful, independent and radiant, chances are he will.

10 Important Signs a Leo Man is Not Interested in YouHow to Flirt with a Leo Man through Text
Hello, I'm Liz