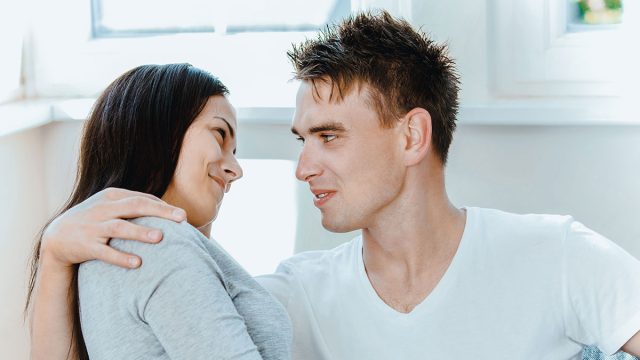 A Leo man and Pisces woman compatibility is hit or miss. This couple tends to baffle each other. If her compassionate nature doesn’t overwhelm him, they can make it work.

Usually, though, their needs are just too different.

A Leo man and Pisces woman may intrigue each other, but this couple can become embroiled in a difficult relationship that is more addictive than supportive.

They may exhaust themselves trying to change each other because neither will feel completely satisfied by the relationship. Their attraction may be great at first but they don’t easily form a stable connection.

Leo men are decisive, strong willed, boisterous and outgoing. Pisces women are passive, intuitive, sensitive and romantic. In the long run, they usually frustrate each other.

They easily attract each other’s attention. She is dreamy, mystical and seems to him to be a bundle of secrets. Her vulnerability also appeals to a Leo man. He is dynamic, determined, assertive and confident. This appeals to a sensitive Pisces woman.

As casual friends, they can also easily stimulate each other’s minds and imaginations. The more serious the relationship, though, the more pronounced their differences become. Even as close friends, a Pisces woman may be too emotionally demanding for a Leo man. He will become overwhelmed by her moody nature.

She may see him as too authoritative, dramatic or overbearing. He is passionate but she may come to see him as intimidating. A Pisces woman may harbor buried resentments and sabotage the friendship rather than speaking up about how she feels.

As friends, a Leo man and Pisces woman can maintain a good connection if their friendship is relatively distant and low maintenance. If they are relying on each other as colleagues or creative collaborators for a project occasionally, that’s fine.

But if they are trying to be the main support in each other’s lives, they will clash. A Leo man can seem vain, demanding and insensitive to a Pisces woman. She takes everything to heart and he can hurt her feelings without realizing it.

Leo friendship compatibility is better with other fire signs or air signs. An emotional water sign like a Pisces woman can be too confusing and suffocating for a Leo man. Leo compatibility is challenging when it comes to trying to connect with a sensitive, vulnerable and introverted Pisces woman.

The best match for a Leo man in relationships is a woman who shares his independence, confidence and desire for adventure. A Pisces woman seldom meets all of his top criteria. She is too introverted for his outgoing style.

She may go along with his interests, but after a while will feel bored or put upon because he is not likely to share her priorities. A Leo man is loyal and faithful and this is reassuring to a Pisces woman. Yet he’s not as expressive as she is.

This can lead her to constantly question the relationship and doubt his intentions. He is not one to deal with an insecure partner, even though he has plenty of his own insecurities and expects to be admired and pampered. This becomes exhausting for a Pisces woman.

She is intuitive and sensitive and he doesn’t always consider other people’s emotions. She may be great for his ego as she will show the admiration he desires, but she may feel disheartened when he doesn’t reciprocate. He often overlooks her needs.

A Pisces and Leo relationship, when it does work, is the result of both partners putting much effort into trying to compromise and meet each other halfway. When this pair is successful, it is usually because the Pisces woman has plenty of emotionally supportive friends and doesn’t put all of the focus on the emotional connection with a Leo man.

It is also likely to be more successful when a Leo man has greater appreciation for and sensitivity toward a Pisces woman’s vulnerability and deep feelings. A Leo man and Pisces woman who are successful in love need to accommodate each other at every turn.

A Pisces woman and Leo man who are able to work with each other may have a relationship that grows and evolves on a deep emotional level. This will be a big step for a Leo man as usually Leo men are more instinctive than emotionally vulnerable.

A Leo man in love can be generous, passionate and completely devoted to his partner. If a Leo man and a Pisces woman can work through their differences and come to an understanding of how to balance out each other’s personalities, they may consider marriage.

Sometimes, this couple may marry on impulse as they are both bound to do spontaneous things when in the early stages of a relationship. If this is the case, each will do their best to make the marriage work out, no matter how tumultuous it is. A Leo may stick it out because of pride. A Pisces because she doesn’t want to let go.

But this is not the easiest marriage. A Pisces woman may crave a deeper emotional connection. As passionate as Leo is, he doesn’t always know how to express how he is feeling on a deeper level. Nor does he always see the need to do this.

Instead, a Leo man will just assume that his actions speak for themselves. He’ll try to impress his Pisces partner by showering her with gifts. But she would prefer if he made her something unique or just spent more time talking and cuddling. He won’t think of these as options and will overlook opportunities to connect with her.

A Leo man may feel like his Pisces partner has become too introverted and therefore assumes she is hiding something. A Pisces woman may not be as outgoing as a Leo man and may become suspicious of why he is going out with friends every weekend.

This couple also struggles with practical matters in a marriage as neither is particularly keen on keeping track of finances, dealing with mundane responsibilities or setting boundaries with children if they have a family. They may pass the responsibility for difficult things back and forth.

When this happens, serious situations aren’t addressed and they can both pay a high price for their procrastination. Both a Pisces woman and Leo man prefer to find the easiest solution to a problem, even if this doesn’t really fix the underlying issues.

A Leo, when hurt, can become angry and defensive. This can create mistrust and hurt feelings in the relationship. A Pisces woman may try to placate him to avoid dealing with temper tantrums and this also becomes counter productive.

Understanding Leo astrology can help you get a better idea of what this sign looks for in a partner. For a Leo man, a relationship profile is not complete if it doesn’t take sexuality into consideration. A Leo man and Pisces woman in bed can have a powerful bond.

They may stay together because of the sexual chemistry. When they are dating or just friends with benefits, the sexual charge in this relationship may distract from the problems in other aspects of the relationship. For example, a Pisces woman may fall in love with a Leo man who is not interested in a serious relationship.

If this happens, she may read too much into his affection and love making. She may see his sexual style as proof of deeper feelings that he doesn’t have. A Leo man is also likely to enjoy the sexual connection with a Pisces woman but may not know how to handle her sensitive emotional nature.

Both will be eager to explore their individual and shared fantasies. Role play, costumes and sex games can be central to their connection. A Leo man gets bored easily and a Pisces woman has an active imagination, so in some regards this couple is highly sexually compatible.

As long as they both understand each other’s expectations and boundaries, they can enjoy a fun and exciting sexual relationship. Great sex can ease the tension that exists in other aspects of their relationship if they are a serious couple. Yet after a while sex becomes more of a distraction for this couple.

If a Leo man is able to slow down and be more attentive to his Pisces partner, he will also find the sexual relationship to be more harmonious, long lasting and fulfilling. A Pisces woman may not always want to go along with his ideas but also is not always assertive enough to make this known.